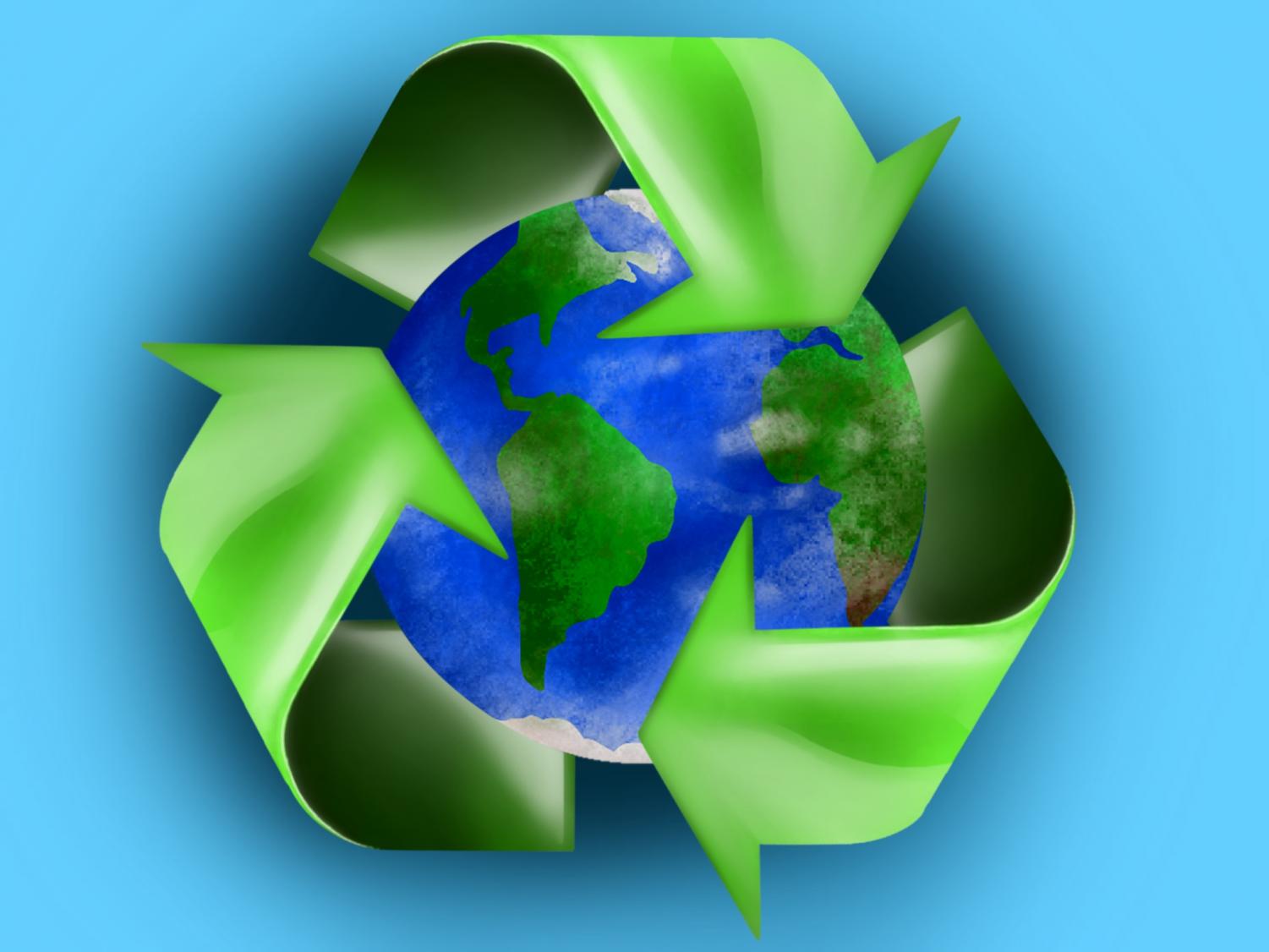 An Environmental Tour of Shaker Heights

Throughout the city, efforts are being made to help fight the global environmental crisis.

Our planet is facing an environmental emergency. According to CNN, data from the National Aeronautics and Space Administration shows that Greenland is losing around 286 billion tons of ice volume per year. The average global sea level has risen more than eight inches since 1900 due to melting ice, which causes flooding that affects people worldwide. Increased carbon dioxide levels are also causing more solar radiation to be trapped in Earth’s atmosphere due to the greenhouse effect, making average global temperatures rise every year. While climate troubles are global, Shaker Heights is taking action to combat it locally.

The Cuyahoga County Solid Waste District’s recycling facility is a major resource in Cuyahoga County for information, expertise and programs that support the management of sustainable materials management and the reduction of environmentally impactful waste.

Diane Bickett, executive director of the CCSWD, said recycling reduces deforestation and trash production. “This saves a lot of energy and water and conserves those virgin resources for future generations,” Bickett said. “Essentially, we are mining our waste stream instead of our natural areas to get the materials needed to manufacture things.”

Bickett said recycling also offers economic benefits, such as jobs in the recycling industry and low-cost raw materials. “For every one job created in waste disposal like landfilling, 10 jobs are created in the recycling industry, because there are many steps in the recycling process from collection, processing, transportation and manufacturing,” she said. “Also, manufacturers usually can purchase recycled feedstock more cheaply than virgin materials. Recyclables are commodities that are bought and sold around the globe just like other commodities like corn, wheat and gold.”

Shaker Heights provides weekly recycling services to residents, as well as an app called “ShakeRecycles” for recycling practices. In Shaker, residents can place cans, cartons, glass, plastic bottles and plastic jugs in five-gallon buckets provided by the city. According to the CCSWD, paper and boxes should be placed in paper bags or bundled with string to be recycled. Items that cannot be recycled in Shaker include styrofoam, plastic take-out containers, hoses and ropes, durable plastics (such as toys and hangers), casual plastics (such as red Solo cups and utensils) and ceramics.

“Reducing consumption of material goods will go a long way to conserving the earth’s resources, energy and water,” Bickett said. “We can all be good stewards of our planet for future generations.”

At Shaker Nature Center, the consequences of climate change are clear

At the Shaker Heights Nature Center, the impact of climate change hits particularly hard. “As the climate changes, we will have native plant species that are less suited for this new climate, and we will see new species moving into our range from the south,” natural resources specialist Nick Mikash said. “Plant bloom times are changing as the climate warms, and pollinators are forced to adapt, and some may not be able to. We will likely lose some species over time.”

The Nature Center has put programs in place to prevent environmental degradation. Recently, Nature Center staff partnered with the Rust Belt Riders, a local composting program, to offer composting at the facility. The Rust Belt Riders, founded in 2014, work with people and organizations across Northeast Ohio to provide clean and timely alternatives to landfills for food waste. Composting diverts food waste from landfills, creating valuable agricultural products such as fertilizer.

“Participants register through Rust Belt Riders for their Community Sourced Composting program, and our Nature Center members receive a discount for the program,” Mikash said. Compost bins are located in the Nature Center where participants can drop off their food waste. “Composting will help prevent food waste from ending up in the landfill and instead turns it into usable garden compost or soil,” Mikash said.

Additionally, there is renovation of the Nature Center’s All People’s Trail. The old APT is being replaced with a new trail, including upgraded accessibility and a more usable space for visitors, staff educators and visiting school groups. After construction finished, staff embarked on habitat restoration efforts, according to Mikash, to “mitigate construction damage and improve habitat health by removing invasive species and planting native species that will benefit wildlife by providing food, resources and habitat.” The new APT opened Nov. 9.

Environmental sustainability is a focus at the Van Aken District

Small, local farms are more sustainable than commercial farming, according to Renee Cho, a writer from Columbia University Earth Institute. Local farming can rebuild crop and insect diversity, require less pesticides, and enrich soil with cover crops, which protect against weeds and soil erosion. “If [food] is locally sourced, that means that it is grown nearby, and when it is grown in the area there are a lot less carbon emissions for shipping,” said Environmental Club adviser Jeanne Wiemer, a science teacher at the high school. “If you get [food] that’s from far away, it takes a lot of carbon emissions to get it where its going.” Nature’s Oasis offers food products from local businesses and farms, as well as vegan and vegetarian foods. They also have recycling and composting bins stationed in their store and offer recyclable cups and straws.

The club’s biggest sustainable contributions have been “the solar panels and just overall getting attention about the climate crisis at hand out there,” said Environmental Club Vice President Sophia Stein, a senior. With the help of the Environmental Club, solar panels were installed on the high school roof in November 2018. The district partnered with local company Better Together to install the solar panels.

Environmental Club has also focused on involving students in environmental sustainability, Wiemer said. “They’ve already removed the straws from the cafeteria, which is moving in the right direction. We have a clothing swaps, where people come to swap their clothes so that you have a reduction of waste from the fashion industry. I’m hoping that all those things continue and that were able to continue to reduce our impact,” Wiemer said.

The high school is still improving its sustainability. “One thing we could do that would make a huge difference at SHHS would be more sustainability in the lunchroom,” Stein said. “Getting rid of the styrofoam trays and using compostable or reusable ones would be amazing, and also providing a more plant-based menu.”

Styrofoam —  also known as polystyrene —  is non-biodegradable. While it can be melted down and remade for other styrofoam products, according to World Atlas, it takes at least 500 years for it to decompose naturally. “Styrofoam is currently not being recycled in the Shaker area, so whatever Styrofoam we use is going to go directly to a landfill. It can then release toxic dioxins when mixed with other chemicals that are in landfills,” Wiemer said. According to EcoMENA, an organization that advocates for sustainability in the Middle East, “while it is estimated that [polystyrene] products account for less than 1% of the total weight of landfill materials, the fraction of landfill space it takes up is much higher considering that it is very lightweight.”

According to CCSWD Executive Director Bickett, while Styrofoam is inexpensive and good for food packaging, food-contaminated materials are not recyclable, making Shaker’s use of styrofoam at lunch wasteful. “[Styrofoam] is not recyclable locally,” Bickett said. “But there may be a compostable or reusable alternative to Styrofoam.” For example, a recent invention called nanowood, developed at the University of Maryland, is a sturdy, biodegradable alternative to polystyrene.

“Promoting more zero waste attitudes around everything we do at school would be great,” Stein said. “Some big things SHHS students can do is have a more plant-based or vegan diet, as animal agriculture is one of the biggest contributors to climate change. I also think walking to school is important, and also bringing reusable containers for lunch and water bottles. Also, voting, of course!”

“Perhaps the most important thing is to be educated about climate change, not to feel overwhelmed, but to understand what small changes you can make to make a difference,” Bickett said. “And also, vote for people who can make changes to local and national policy and laws. [I feel] motivated to help elect leaders who will help us transition us to a green energy future.”

“Individuals can help by recycling, which reduces greenhouse gases, walking, biking, carpooling, reducing energy use [at] home by turning off the lights and unplugging appliances and buying less ‘stuff,’ ” Bickett said.

“I live on a farm where all of my meat comes from the farm, and most of my food comes off the farm as well. I really try to have a sustainable lifestyle in terms of that,” Wiemer said. “I also can a lot of things, reuse a lot of things, and try to fix everything that breaks. That way you have a lot less impact on waste.”

People can also promote sustainability in nature. “There are lots of small choices that people can do to help, such as learning about invasive plant species and avoiding or removing them, planting native species in their yards to create habitats for pollinators and wildlife, or volunteering at a local park or organization such as our Nature Center for environmental stewardship events,” Mickash said.

The threat of climate change has sparked activism around the world, with people in Shaker participating in protests. Stein is one of the organizers of the Cleveland Climate Strike that occurred on March 15 last year, and attended one in September, making speeches at both.

Greta Thunberg, a Swedish 17 year old, is the founder of School Strike for the Climate, an international movement led by students protesting political inaction against climate change. Last year, a worldwide climate strike was held on Sept. 27, with more than 4 million participants, according to Vox. People are demanding action.

Stein agrees with action against climate change, and that lack of green, sustainable policies will result in irreversible damage to the planet. “Every little thing counts. I think that the global climate crisis is a huge problem, and that we need to be acting a lot more on both an industrial and personal scale. But, I still have hope.”