When The Wonka Factory was in need, President Trump delivered. But at what cost? 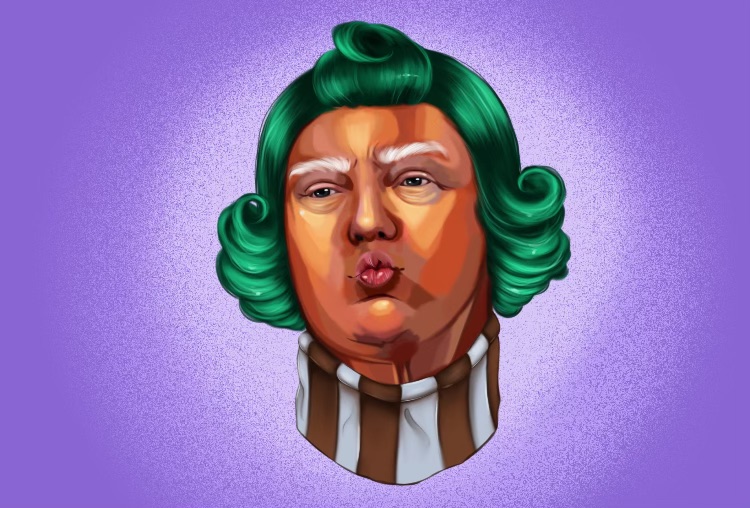 On Jan. 6, Wonka Factory management reported the largest strike it has ever seen.

When President Trump caught wind of this news, he ordered a swarm of murder hornets to clear the path from the White House to the Wonka Factory. Once he arrived at the factory, Trump ran into the herds of Oompa Loompas, shouting with joy and pumping his fists, exclaiming, “My people, my people! Well done! Bravado!”

Trump stayed at the protest all day, watching the hoards of Mini Coopers, Suzuki Celerio Hatchbacks and clown cars empty what seemed like a never-ending stream of angry Oompa Loompas.

When media reports of looting in The Rock Candy Mine came in, Trump harnessed his Haribo hard hat and led his noble dynasty to the goods. As chants broke out, notably of “Everlasting Right-Stopper,” Trump tried his best to memorize the phrases but just couldn’t get the hang of it. He resorted to clapping his hands, never quite on beat.

Once Trump sensed the protest was dying down around 5 p.m., he realized he had never had more fun. Not when his bed time was extended to watch the season finale of Twilight, not when he had Micky D’s with the bros, and more fun than a night out with Jeffery Epstein.

He proclaimed that rounds of Snozzberrie Smirnoff were on him for the rest of the evening. Amid uproarious applause, Trump hoisted Oompa Loompas onto his shoulders and issued noogies to whomever was lucky enough to jostle their way under his knuckles.

Though the day seemed as though it was going to earn a slot in Trump’s Peaceable Kingdom Top Secret Diary, an unprecedented turn of events occurred after a baker’s dozen of Snozzberries had been guzzled.

Near midnight, Oompa Loompa “Wild” Rumpus announced that he and his brothers and sisters had a very special offering for Trump as a thank you for the leadership he had displayed. Rumpus then produced a toupee made of the finest silken Banana Sugar String. While Trump was overcome with emotion, Rumpus and four of his brethren placed the crown upon his blubbering noggin. However, Rumpus had no intention of crowning and thanking this wanna-be worker of the candy. Nay! Rumpus’s colleagues instead shoved a dozen Whipple Scrumptious Fudge Delights down Trump’s gullet.

This sugar overload hurtled the tuckered-out little guy into an immediate sugar coma, while Oompa Loompas of all kinds came together to squeeze Trump up the same tube that banished Augustus Gloop from the Chocolate Room.

As the tube gobbled up the President of the United States, Loompas celebrated as they do best: They performed till their little legs couldn’t perform any longer. They kicked the mightiest kick lines they ever had, and shimmied at a frequency that one could only believe if seen with their own eyes.

There has been no word, tweet or tantrum from Trump since his appearance at the Wonka Factory, though it has been reported that remnants of Jergens Natural Glow Instant Sun Sunless Tanning Mousse linger in the Chocolate River.