‘Rite Idea: The Stakes Have Never Been Higher

The Board of Education must make wise decisions to help lead us out of grief, anger and frustration 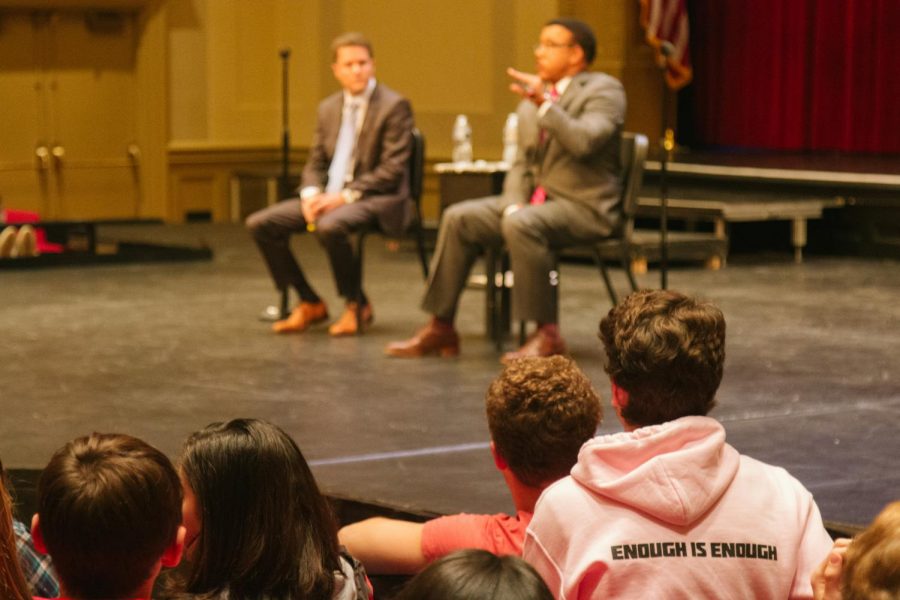 Students in the audience listen to Glasner and Wilkins speak at the Nov. 8 meeting.

The past six months in Shaker have seen tragedy and disarray.

On July 10, Fernway’s roof caught on fire from a repair job gone wrong, damaging both the school and the spirit of its past and present students. Teachers and students were forced to relocate to Boulevard, Onaway and Woodbury schools for an indefinite length of time.

At an Oct. 9 Board of Education meeting, a cheerleader and her mother came forward to allege bullying directed at the daughter by the team’s assistant coach. She claimed the coach made comments concerning her weight and made her feel unwelcome on the team. Two days later, the district released a statement informing community members that both cheerleading coaches had resigned.

On Oct. 10, English teacher Jody Podl was put on administrative leave for allegedly violating the discrimination and harassment, intimidation and bullying policies of the district. Her leave was lifted a month later on Nov. 7 after she was given a reprimand by the district for harassment and bullying. Throughout the investigation, the community and her students were left in the dark about the reason for Podl’s leave.

On Oct. 23, head coach Jarvis Gibson was put on administrative leave after a volunteer assistant coach previously employed by the district was found to be a felon. Three days later, Gibson resigned.

On Nov. 1, Principal Jonathan Kuehnle was also put on administrative leave. The investigation of his actions is yet to conclude, and the administration has yet to comment on the nature of his leave. In the meantime, former middle school Principal David Glasner has taken over as substitute principal.

On Nov. 7, John Morris, head of the Shaker Heights Teachers’ Association, published a letter alleging the district had mishandled Podl’s investigation. He said Kuehnle and Dr. Terri Breeden, assistant superintendent, who led the harassment and bullying investigation, failed to give Podl due process before disciplining her. In the letter, he urged SHTA members to attend the community meeting the following evening to “ask leadership why we are treating our teachers this way.”

Within the first five minutes, that Nov. 8 meeting devolved into chaos. Glasner, Interim Superintendent Stephen Wilkins and Scott Stephens, executive director of communications, lost control of the situation after community members and students felt their concerns weren’t being addressed. People yelled questions and accusations at the three men on the Large Auditorium stage.

On Nov. 17, admired Woodbury teacher Aisha Fraser was murdered by her ex-husband, Lance Mason. He went to jail in 2014 for brutally assaulting Fraser. The community was devastated by the loss and held a candlelight vigil in her honor two days later.

On Nov. 30, the SHTA released a statement announcing they would be entering into arbitration with the high school administration “based on a lack of due process for high school English teacher, Jody Podl.” This means the SHTA and the district were unable to reach an agreement about its actions in her case and are hiring a third-party to rule on the grievance.

The rapid sequence of events has exhausted us all.

The past half-year has been a tough one for Shaker. We are still mourning the death of Fraser. Teachers are demoralized, parents are frustrated, administration is frantic — and students?

Students are all three.

But we don’t want to feel like this forever. Unfortunately, the disjointed administration left behind by former Superintendent Gregory C. Hutchings suffers a leadership deficiency; we have an interim superintendent and a substitute principal.

Wilkins assumed his position after Hutchings cut short his superintendency last year by announcing he had accepted the top job at Alexandria City Public Schools in Virginia. Glasner’s appointment to substitute principal after Kuehnle’s change in status was even more abrupt. One could argue that these men have not had enough time to master their roles. Regardless, they aren’t yet showing the leadership these circumstances demand, and the clock is ticking.

Shaker needs leaders who display empathy, who put the needs of the community before their own ambitions and egos. We need people in power who listen to students, teachers and parents ‒ not just one group at the expense of the others. Most of all, these attributes must be accompanied by action.

Calling that community meeting following Kuehnle’s departure was important. But the lack of leadership ensured that this meeting would fall apart. Even with the superintendent and the high school principal at the front of the room, the 900 people who attended went away feeling uninformed and uncertain of the district’s direction and well-being. By refusing to step up, relate facts and offer an apology, the administration ensured that no one was put at ease, and no one felt their questions had been answered.

In a Nov. 13 letter to the community, Wilkins apologized to Podl and to “the impacted students and their families.” He said he was reviewing the performances of Kuehnle and Breeden regarding the Podl investigation. “Our work is to prepare young people for the future both intellectually and emotionally. Let’s all pledge to learn from this, to get better, and to deliver what we promise—excellence, equity and exploration for all,” Wilkins continued.

But in nevertheless pursuing arbitration with the SHTA and neglecting to rebuild relationships with students, staff and community members, district leaders have shown that they do not see these unsettling events as the rest of us do: as opportunities for growth.

After so many months of damaging events and actions, long-term healing is imperative. Wilkins’ and Glasner’s roles as leaders are temporary. As such, it’s not clear that they are capable of providing the support we need.

This responsibility rests with the Board of Education.

The most important task facing this board is selecting a new superintendent. Hiring a candidate who cares about and understands Shaker is essential. The Board must make a concerted effort to account for the wishes of everyone in the community, and not just blindly obey the advice of a search firm.

Another principal search, if required, cannot be more of the same. It must be the first priority of the board to select a principal and superintendent we can all rally around, one who amplifies our voices. The candidates should be willing to humanely confront the sober issues that have arisen.

The district proudly produces leaders. But we cannot learn how to lead if district leaders shun the attributes and behaviors they hope to instill in us. So, as should always be the case in a school district, think about the students.

And show them how to lead.