Theatre department shows their depth in acting and ability to win over an audience with the 2016 fall musical production. 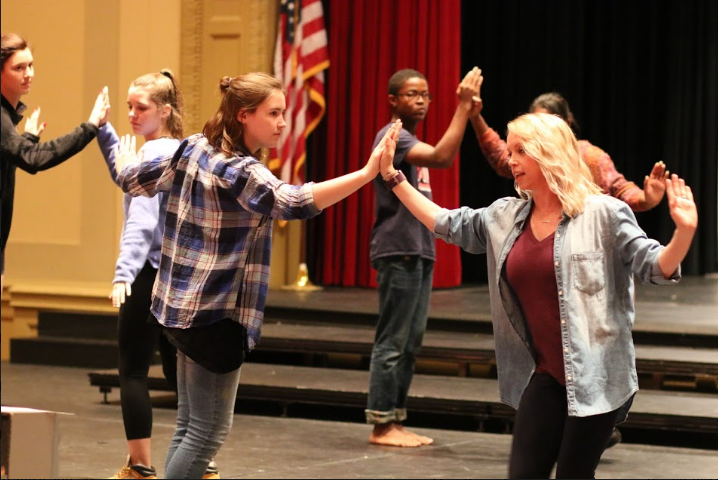 The cast ensemble showed great energy and excitement in their complicated choreography throughout the production of "Urinetown."

The Shaker Heights High School Theatre Department, with another revolution, is back in all of its glory. Vibrancy and excitement echoed out of their triumphant performance of the Tony Award-Winning musical and fall production, “Urinetown.” Going into the theater of a show entitled, “Urinetown,” audiences were not expecting much; yet what they saw exceeded any expectations they held.

The story of “Urinetown” follows a dystopian city ravished by the scarcity of clean water. Due to this, the ability to urinate is regulated and requires a fee. A failure to pay this fee will send you to the mysterious Urinetown. All “amenities” are controlled by the business Urine Good Company, owned by the greedy Caldwell B. Cladwell. Senior Dylan Freeman played this role, exuding confidence, strength, and evil power. In addition, in musical numbers such as “Mr. Cladwell” and “Don’t Be the Bunny,” both Freeman’s voice, comedic timing and choreography were masterful.

Bobby Strong, a featured role, is played by sophomore Kevin LaMonica. He is the former assistant custodian to Amenity #9, where most of the show is held. Strong, after seeing his father being sent to Urinetown, leads a rebellion against Cladwell and the oppressive government of Senator Finn. LaMonica is artful in painting Strong as a quiet and calm character before he is inspired by his true love, Hope Caldwell (the businessman’s daughter), played by junior Sydney Fieseler. The character of Hope is the driving force of light in the show, and a joke that appears throughout the production, it’s spirit of “hope.” In “Follow Your Heart,” Fieseler and LaMonica swoon for each other, and the harmony of the song was truly impressive for both of their powerful voices. Both actors’ prowess is shown throughout the rest of the show, as they struggle through the revolution and serve as a “Romeo and Juliet” in the show, representing sharp and strongly opinionated sides pitted against each other.

What may have lacked in storyline, made up in the talented acting of the cast. A particular standout was the character of Officer Lockstock played by Senior Gus Mahoney. As a police officer, and narrator, brought the difficult task of communicating with both the audience and his fellow cast members. Mahoney had the audience shaking with laughter as he showed his great stage presence and comedic timing. Another cast member that showed great presence was senior Sydney Keller, playing the role of Penelope Pennywise, who runs Amenity #9. All through the story it is unclear which side Pennywise is truly on, and the climactic twist was portrayed effectively by Keller.

The set of the stage, created by the Stagecraft Cast as well as student volunteers led by the guidance of Technical Director Charles Tisdale pulled in the audience in a way not yet seen on the Shaker stage. With the production of “Urinetown” brought the new use of piping on the sets, as well as LED lights built into the stage that illuminated the side of the main set structure. The lights added a mesmerizing effect not easily achieved with overhead spotlights. Director and Theater Department Chairman Scott Sumerak hopes to be able to add more LED lights throughout the theater to build on this showcase of productions in a new light.

Unlike other musicals, “Urinetown” frequently breaks the fourth wall and speaks directly to the audience. This occurs through the characters of Lockstock as well as Little Sally, played by junior Anna Walker. Throughout the show, these two characters essentially make fun of the culture of musicals, and even tells you in the beginning that “Urinetown” will not have a happy ending like others. Both Mahoney’s and Walker’s apparel bring them from their high school selves into the era of Urinetown. The costumes of the characters really pulled the audience in; from the police uniforms of Lockstock and Barrel to the ragged clothes of the townspeople.

It was clear throughout the show that the audience as well as the cast were having a good time. From the whistles after a powerful song, to the clever choreography of Cladwell, the energy bounced back and forth from the crowd to the performers onstage in an enjoyable experience for all.

A true driving force of the production was the ensemble, with an organized and exciting level of choreography not often shown in a high school production. Freshman Colin Frothingham and junior Ruby Gibson dance violently with in “Snuff that Girl,” and join the rest of their ensemble in vibrant and beautiful song. The pure energy of the ensemble was incredibly exciting for the audience – it is obvious that Sumerak chose well.

Themes of “Urinetown” range from rebellion to peace, conformity to love, and acceptance of others. The actors are able to bring relevance to such a text in this time, after the 2016 election of Donald Trump. As stated in the Director’s Letter, as the political rhetoric grew more insane, cast rehearsals became more exciting. The show took advantage of preexisting themes of corruption, the power of the people, and the efficiency of government present after this tumultuous election and channeled those through their performance.

After the department created the wonderful “Les Miserables” in 2014, expectations were high for the department’s next musical production. However, the actors, music, lighting, and set were awe-inspiring and impressive, the show was incredibly relevant, and the script provided enough room for change. The Theatre Department has found its “sweet spot” in shows such as “Les Miserables” and “Urinetown” – portrayal of a struggle, hilarious comedy, and serious themes. With its energy and brilliance, “Urinetown” is an undisputed success.