They Aren’t Just For Novels

For every school dance, Student Council decides the theme in an effort to make each event uinique 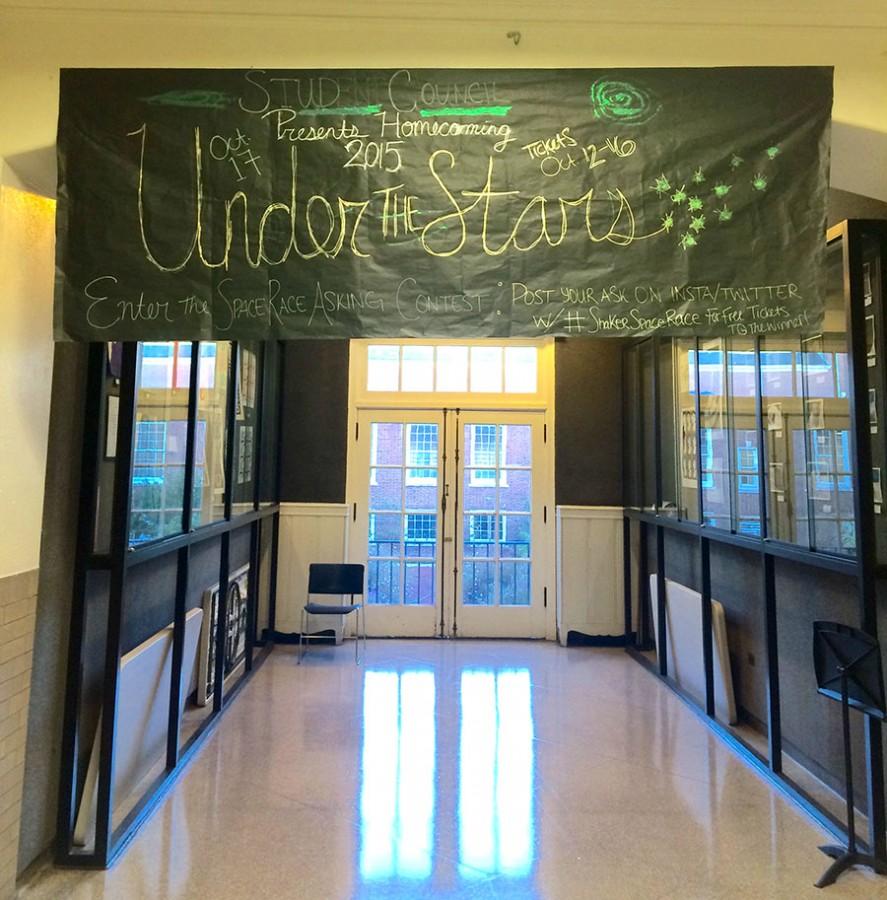 A banner displaying the 2015 homecoming theme hanging in the Ely gallery near the main office Oct. 6.

Students know that themes are important.

Student Council knows they are, too. Dances are big events for lots of high school students. Student Council establishes a theme for dances each year and decorates the North Gym accordingly. It’s a role Student Council fulfills for every dance including the upcoming winter formal. However, students seem to enjoy the dance even if they don’t notice much about the theme.

This year, the Oct. 17 homecomig theme was Under the Stars. The theme was most evident in the decorations that adorned the North Gym and seem to be the only change from year to year.

Though the reviews of homecoming were mixed, this year’s theme drew lots of praise from upperclassmen. “This year, night under the stars, this was my favorite,” said senior Jayla McNeal, who enjoyed the music played at the dance most .

“I think this is actually my favorite theme,” junior Tavion Tate said. “I’ve been here for the past three years. The other two themes were OK, but I think this one was the best one.”

Last year’s homecoming theme was masquerade, while the year before featured a circus theme.

According to Student Council Vice President Carolyn Sindelar, coming up with these themes is not a challenge. “We have our whole senior class come up with it, collectively. So it’s not just one person just thinking of ideas. It’s 14 people coming up with ideas,” she said.

The themes may make each dance distinguishable, but students agree that they don’t affect their willingness to attend. “Sometimes people might think certain things like, ‘It could be lame,’ or something. Sometimes they misjudge the theme,” McNeal said.

No matter the theme, “I would still go,” freshmen Roniesha Washington said.

Homecoming themes vary from school to school. This year, Beachwood’s theme was colors while Lawrence School’s was “Alice in Wonderland.” Themes can inspire exciting visuals, but students who attended Shaker’s dance said the decorations did not affect their experience.

“I don’t feel like the theme had anything to do with it,” Tate said.

McNeal said the theme doesn’t affect the amount of fun she has, either.

“It depends on who you go with,” junior Ananda Prioleau said.

Tate added, “It definitely depends on the crowd you’re with.”

For the circus theme two years ago, the gym walls were covered with hula hoops and posters of circus scenes. At the red tablecloth-covered tables, the centerpieces were glass vases filled with gumballs. Those were a hit among students, while the masquerade-themed dance drew some criticism because masks were not allowed.

This year, strings of lights and glow sticks provided under-the-stars spirit, along with the banner outside of the gym. Glow-in-the-dark star stickers covered the gym walls but were hard to see. Students seem to enjoy glow sticks the most of all the decorations.

“Every time we go, I don’t really see a change in the scenery,” Prioleau said. “It’s just like lights put up. I don’t see a difference.”

Students who attended homecoming this year reported having a pleasant time. According to freshman Jackson Tuggey, his favorite part was “just being with friends. You can’t really have fun without your friends.”

Washington’s favorite part was “getting to know more people.”

Tate and Prioleau agreed that music was the best part of the dance. “The music was definitely better,” Tate said.

“I didn’t really care [about the theme] because it didn’t tie into what we did,” Tuggey said.

Student Council officers have not yet shared the date or theme for the upcoming January winter formal.

Said Sindelar, “We have our winter formal theme, but I can’t reveal that.”