The City Will Know Our ‘Impressive Array’ Again

Students state diverse views of publishing college acceptances, but in the old days, The Shakerite did so -- students’ names included 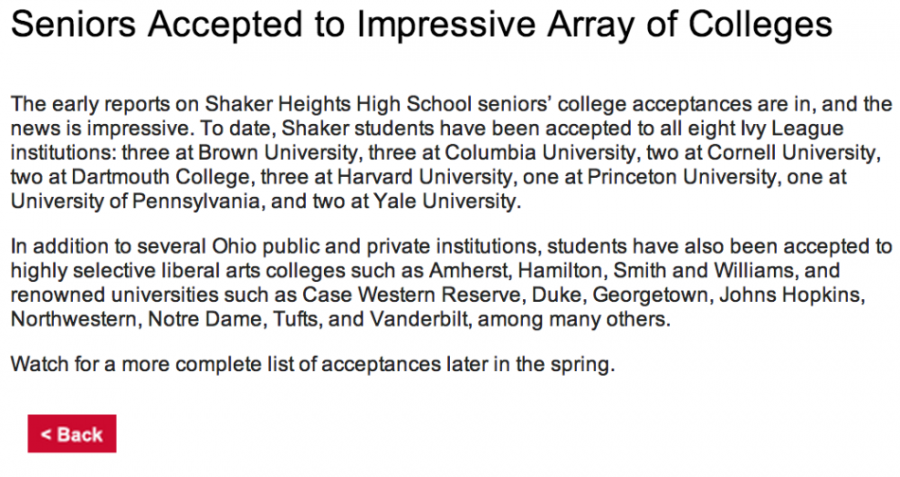 The district published an early list of colleges and universities that had accepted Shaker students in April 2014, categorizing between Ivy League schools, “highly selective liberal arts colleges” and “many others.”

Shaker’s list of college acceptances in spring 2014 provoked criticism and a strongly-worded letter. One year later, it remains controversial — and in practice.

“My view of the list was quite cynical,” 2014 senior Ezra Zigmond said of the district publishing his college acceptance along with many other Shaker seniors’ last year. “I was surprised. The list seemed to be in such opposition to Shaker’s values of fairness and equality.”

Acceptances are no longer concealed with the district’s list of “Seniors Accepted to Impressive Array of Colleges.” Meant to awe the community and interest potential students, without including seniors’ names, the district’s account of acceptances published on shaker.org last year disturbed students instead.

Though the list did not rate the acceptances or specify who was accepted, it seemed to herald highly selective institutions such as the Ivy League universities over less prestigious schools, such as state universities and some liberal arts colleges.

Zigmond was one of four Shaker seniors — along with Anna Hundert, former Spotlight Editor Bridget Cook and former Editor in Chief Shane McKeon — who addressed the district’s list last year in a letter to The Shakerite. They criticized the district for emphasizing seniors’ acceptances to higher-tier institutions over admissions to less prestigious schools. In a later interview Zigmond, who now attends Harvard University, said, “There’s a serious problem with the way that students and parents perceive the college admissions process. Even the students who were accepted to the ‘impressive array of colleges’ wonder whether they deserve their acceptances.”

“Now that I’m no longer a senior, it’s even easier for me to see how toxic this attitude is to students and parents,” said Zigmond. “I care even more about the problems with college admissions now that it isn’t something that I, too, am worrying about.”

“I don’t think it needs to be a secret where a person got into college, but I disagree with a high school publishing it as bragging rights,” said senior Gabe Hersch. “There’s a fine line between being proud of one’s accomplishments and minimizing those of others.”

Senior Mariah Howard agreed. “I understand Shaker’s enthusiasm to bring the brightest and most talented to the district, but publishing our acceptances is unacceptable,” said Howard. “I applied in the privacy of my own home, waived my rights and signed legal documents. I believe my acceptances should not be publicized for the benefit of the district.”

The district’s list, however, is far less revealing than an annual list published in The Shakerite for years. As far back as 1956, The Shakerite published annually not a list of colleges to which seniors had been accepted, but seniors’ names adjacent to the college they planned to attend. This list, which typically unfolded across two pages of the newspaper, was alphabetized by students’ lastnames and was compiled by reviewing “green sheet” responses seniors submitted to the guidance department.

The list, published in the June edition of the newspaper, was very popular; parents came to the high school to request copies and then reviewed the list in the hallway just outside the newsroom. Counselors used the list to show juniors where seniors of similar interests and academic performance had been accepted (a function now provided by Naviance).

The practice went on unquestioned until the late 1990s, when editors began to wonder whether publishing the list was actually adding to students’ already increasing stress and self-consciousness about their college prospects. They reported hearing classmates express concern about seeing their names in The Shakerite next to schools deemed inferior by the community. For example, they noted, students said, “I’m not going to get in anywhere, and it’s going to say that I am going to Tri C in The Shakerite.”

Heated editorial board discussions ensued for the next few years until editors from the class of 2003 voted to stop publishing the list. They wrote and published on Page 1 an editorial explaining their decision, which was not popular among adults in the community, one of whom wrote a letter to the Sun Press to criticize editors for denying the community this information. Today, seniors informed of the Shakerite’s history of publishing both names and schools react with wide eyes and expressions of disbelief.

However, senior Julian DeGeorgia thinks students are too sensitive about the district’s practice of publishing the names of colleges and universities. “In my opinion, students have honestly been making too much of a fuss out of it. Shaker should be proud of the fact that it has been able to prepare students for success at the prestigious institutions that were featured in the list,” said DeGeorgia. “For a public school, regularly getting into highly selective colleges is kind of a big deal, so why would it be wrong to post a list letting the community know of the school’s success?”

Superintendent Gregory C. Hutchings, Jr. said he supports the list because it publicizes all colleges that admit Shaker students.

Typically, after publishing a preliminary list of acceptances from selective institutions, the district publishes a longer list of all colleges that have admitted Shaker students. “The full list is published on the website in the summer, when all the data is complete, and in the high school profile each fall so that it can be included with applications,” said Communications Director Peggy Caldwell. “The district was already publishing a list of colleges to which Shaker seniors were admitted when I arrived 21 years ago.”

However, the administration’s reasoning has not convinced all students.

“The issue is that there is a huge difference between the intention and the effect of publishing such a list,” said Hersch. “The school intends to show how successful its students are, but in doing so marginalizes the accomplishments of others.”

Howard argued the list disregards Shaker’s diversity. “I feel that there are more important issues to be published other than the few students who’ve been accepted to prestigious institutions,” she said. “You would think as Shaker being diverse in culture we’d address issues at hand instead of masking them with small accolades we’ve been awarded.”

Guidance counselor David Peterjohn said the list could bring negative effects to students’ mental health. He explained that it depends on the student, but publishing the list can add extra stress and anxiety.

“A student should choose a school based on what the best school for them is, not what school is the best on a list in a magazine,” Peterjohn said.
After the Shakerite’s letter to Hutchings protesting the list last year, whether the district will change its practice remains unknown.

Bridget Cook (’14), The Shakerite’s former spotlight editor, co-wrote the letter to the district with Zigmond, Hundert and McKeon, and questions if the letter will prompt change. “The district has hopefully learned not to rank its students, but something tells me nothing will change in the way they handle reporting students’ admissions.

“I’m interested to see if the piece last year influences this, but I’m honestly not sure how they’ll proceed,” Cook said.

Howard hopes the district refrains from publishing any list. “Quite frankly, it’s not anyone else’s business besides the student’s and their family to know where they got accepted,” she said.

Zigmond took a more compromising view. “I certainly hope that the district doesn’t make a divisive list of acceptances again. Given that there is no levy this year, I doubt that they will,” he said. “I’m always happy to see a fair list at the end of the school year that shows every college acceptance.”

As for the future of the list, Caldwell said, “We will publish the full list on the website and in the high school profile as in the past. But again, I would emphasize that it is only one rough indicator. “No school or student should be judged solely on one factor.”