The 6 Point Guide to Your College Tour 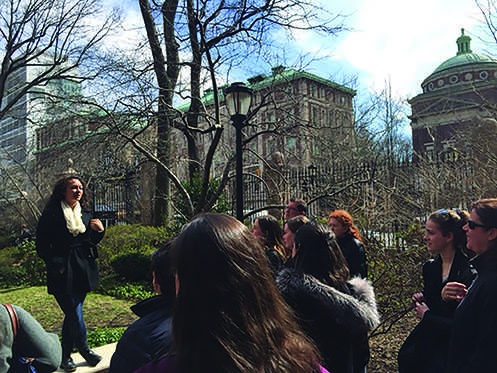 Between overzealous tour guides and an over-the-top construction project, there are some aspects of college tours that are universal.

This past spring break, I made the unwise decision to go on nine college tours in four days. While this rapid-fire approach reduced time and costs, it was a massive undertaking and a sensory-overload. Now, I stare down the barrel of yet another summer. For many, this means we are one step closer to that inescapable reality: life after high school, where we must face up against monstrous operation that is the college application process. But all is not lost! While my college tour experience may have been a hectic mess, it left me with wisdom that can ensure none make my mistakes again. The fact is, the college pitch is an easy one to crack. Any tour you go on — be it at massive public schools or small liberal arts schools — will include the same six universal factors.

1. Your tour guide will be so perky you’d think she (or less likely, he) just chugged three Red Bulls in three minutes.
Keep in mind that to become a tour guide, students went through a vigorous application process in which they demonstrated their abilities to walk backwards, project their voice across a football field and tell students that they are currently having “the time of their lives” at college. If the guide fails to carry out these duties, report him or her to the admissions office. Moreover, the tour guide should be actively involved in at least five clubs, a member of a sports team and currently double-majoring in neuroscience and dance (with a minor in French). Most importantly, you should take every single thing this person says as reflective of the entire student body. These students, who are willing to sacrifice part of their summers giving tours to clueless high school kids, obviously represent everyone on campus, right?

2. Your tour will detour around some colossal and disruptive campus construction project for some sort of crazy new state-of-the-art facility.
Projects could include: A third rock wall for the gymnasium, a new smoothie kiosk right next to one of the three starbucks locations or maybe renovations to one of the housing buildings that is only three years old. The possibilities are endless, and the effects will be felt. You’ll have to detour around bulldozers and cranes, where your tour guide will shout over the construction noises about “how much they wish they weren’t graduating next year” and about “how lucky you’ll be to get to see the completed project.” No matter what ambitious project you’re maneuvering around, the tour should make clear where the university is putting all their funds. All the while, don’t expect your tour guide to mention that the school’s tuition is now over $60,000 a year.

3. If the tour guide doesn’t spend 10 minutes explaining the “blue light” emergency phones, you should immediately leave and never return.
Tour guides should mention that when you’re standing at one of the emergency phones, you’ll always be able to see two more of them somewhere else. (That way, if you’re ever being attacked, you’ll have more options to get help — keeping with the school’s open-minded philosophy.) The tour guide should also brag about either a. how quickly the campus security can swoop down on these emergency phones or b. that no one has actually used the emergency phones in the past 500 years. If the emergency phones have been used recently, or if the campus security arrives on the scene in any timeframe over 0.5 seconds, you should write off the school as dangerous and take your applications elsewhere. If the tourguide cannot brag about the head of security being a former head of the president’s secret service detail, then you should proceed very cautiously. Don’t expect your tour guide to mention the words “sexual assault,” “date rape” or “alcohol” at any point. (I mean, that would just be expecting just too much.)

4. You will casually pass the university president’s home as you’re walking through the campus.
The president must live on campus, and/or be considered by all students (a.k.a your paid tour guide) as “a real presence at the school.” Maybe the students give him a nickname, demonstrating the president’s fun-loving and down-to-earth nature, or maybe he hosts office hours where all 5,000-20,000 students are encouraged to come eat ice cream with him while talking about their classes. Of course, there’s no denying that the president will be a “him” and, if he does live on campus, it will be in by far the nicest housing option in the school.

5. Your tour guide will talk about amazing international study options.
If fewer than 99 percent of students don’t choose to spend at least one semester doing onsite research on coastal erosion in Kathmandu, then the school obviously can’t cater to your needs. Your tour guide will not mention that the study abroad “experience” actually inflates your tuition or that the overseas classes might not even help you fulfill your major. However, your tour guide should definitely mention how he or she elected to spend his or her money studying abroad during the summer semester, because he or she couldn’t bear missing out on the fun and exciting campus events going on during the school year. Ignore the fact that they are now so desperate for money that they have to sacrifice their summer giving tours to high schoolers.

6. Your tour will casually walk past plenty of evidence of the school’s “eco-friendly outlook.”
As you traverse your college campus, you will soon be made aware of the importance of sustainability in the college culture. Admire the various (empty) recycling receptacles dispersed throughout the hallways. Look on at the window-covered student union, designed to let in as much “natural light” as possible (ignore the one-window dorm rooms). Marvel at the home-grown sustainable veggie burgers in the cafeteria (because no one’s eating them.) Between the information session and the tour itself, you should leave that school knowing that they are doing every single thing possible to solve the global warming crisis. (Apart from actually directing significant funds to their environmental science department.)

The finale: Why I chose to come to so-and-so college.
This will be the kicker. If your bubbly tour guide, expensive construction projects, unused blue phones, over-friendly president, unrealistic study abroad opportunities and environmentally-friendly facade hasn’t persuaded you, then here’s where the tours pull out the big guns. After being herded from cafeterias to dorm rooms to libraries, the tour will end by completing a full circle of the grounds. Your tour guide, somehow still smiling and still walking backwards, will gather the group and make one last pitch. These people you met less than an hour ago chose this as the place to spend four years of their life, why can’t you? Forget the fact that the college may not offer your major, may be located too far away or may be ridiculously overpriced! This tour guide is having fun here; you can, too!

And that’s it. 10 minutes later, you’ll be driving away from the campus, where the young team of tour guides did everything in their power to sway you to apply to their school. Whether you actually are able to get accepted is another story altogether. But for now, you can pat yourself on the back for jumping another college-process hurdle. Don’t get too self-satisfied now, because, as you soon will be aware, the next step is far worse: listening to your parents opinions. Buckle up for a fun road trip, and on to the next school.