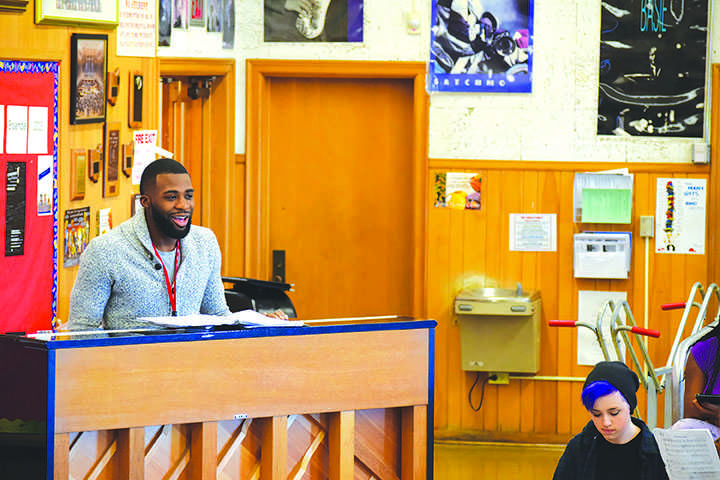 America is going through uncomfortable times. Harsh displays of the racist side of our country pervade the media.

If change is to come to Cleveland, people such as Mario Clopton, the high school’s choir director, will be the reason why.
The news of Tamir Rice’s killing by Cleveland police brought tears to Clopton’s eyes.

He teaches choir at the high school and middle school and “the connection of imagining one of my kids being shot, it affected me,” he said.

Eight months later, Clopton volunteered to be on the Community Police Commission, a commission created with the intent of fixing the problem of police brutality in Cleveland.
Clopton was born into a musical family. His uncles rapped for record deals, and his grandparents sang in doo-wop groups. As a child in elementary school, he played the viola and the tenor saxophone. Music was always important to him because, Clopton said, “I’ve always felt that I speak through my music.”

However, Clopton’s childhood was filled with more than just music. As one of the few black households in Solon, his family was singled out. He remembered small things. “We would have a Labor Day party,” said Clopton, “and they would ask us to turn down our music even though our music wasn’t that loud.” He said that he was often warned, “you can’t be around in the neighborhood with toy guns, even squirt guns, things that don’t even look like weapons.”

“People’s perception of you stops at your skin color,” his family would say. “People don’t know how wonderful you are as a person; all they see is your skin.”

Clopton’s family is proud of his effort to initiate change. “They expect good things from me. Because I expect good things from myself. It has become the ‘Mario Standard,’ ” Clopton said.
Driving to college, Clopton and his friends, both white, were pulled over. The State Highway Patrol officer asked everyone to relinquish their driver’s license. He then told Clopton, who was sitting in the back, to step out of the car. Clopton often tells people, “You can’t wear your degrees on your face.” He said that when he leaves Shaker Heights High School, he is just another black man, “which seems to be the focus of a lot of policing in our community.”

He has noticed a very clear bias in Cleveland that he hopes he can fix.

In the middle of Clopton’s third year of college, he packed his bags and drove his 1998 Ford Taurus from California State University to Montana to join Barack Obama’s presidential campaign.
Clopton stayed with it all the way to Washington. “Fifty years from now, I wanted to tell my grandkids I did everything I could to see that through,” he said.

That brief exposure to the world of politics is partially responsible for Clopton’s decision to volunteer for the commission. The more relevant factor, however, is that he lives in Tremont. As a Clevelander, he is “determined to be here and raise [his] family here.”

Clopton grew up in the Miles-Harvard neighborhood of Cleveland. After college, he moved back to the Lee-Harvard District. He is now living in Tremont with his fiance. “I chose to come back to Cleveland,” said Clopton, “because I believe it’s not just up and coming. It’s here.”

Clopton said he became a teacher because it allowed him, “to change lives every day, even in face-to-face conversations.”

Sophomore Ruby Gibson is a choir member and said Clopton’s presence is appealing. “He is very energetic and bright and bouncy,” she said. “It’s infectious.” Clopton teaches during period 11, after school. Junior Gus Mahoney is one of the students in that class. “He likes to joke around a lot but he is very determined to teach us,” he said.

Sometimes Clopton talks to his students about his role on the commission. “It’s really interesting to have a teacher so active in the community,” Mahoney said.

Less than two weeks after the Tamir Rice shooting, the Department of Justice’s investigation of the Cleveland Department of Police — which began March 13, 2013 — was released. The Consent Decree, based on their findings, was made public several months later. While neither mention the shooting of Tamir Rice specifically, they address the conditions that led to it.

The decree outlines deadline requirements for the Cleveland Police Department. These requirements detail police officer training in “use-of-force decision-making, use-of-force reporting requirements, the Fourth Amendment and de-escalation of conflict techniques,” providing guidelines for the creation and responsibilities of the Community Police Commission.

The commission’s goal is to advise and assess the “police policies, procedures, practices and cultures” of the Cleveland Division of Police Clopton was chosen, out of nearly 200 volunteers, to be one of the commission’s 13 members. Soon after, he was elected one of the three members to lead the group as a chairperson.

Phyllis Harris, a member of the selection panel, said Clopton was picked for several reasons, the most prominent of which are because he is a young black male representing the LGBT community, and he is in contact with youth every day.

“His engagement with advocacy, social justice and the political process” were also important, Harris said.

“I knew he was an out, gay man and I thought it was important that he was authentic and comfortable in his skin.”

“I have a son at Shaker Heights High School, and I would see Mario as a role model for everyone,” Harris added.

However, she said, he wasn’t chosen purely because he’s a politically involved citizen of a minority group. He’s an optimist, someone this city needs right now, she said. Many people have become jaded to the political process, but Clopton believes “that government is a place where real people can be represented, and real positive things for regular people can happen. Clopton thinks that while commissions such as Cleveland’s have failed in the past, this time will be different.

“It is court mandated; there are things that we have to get done,” he said.

“I am determined to make sure this commission follows through.”

When Clopton was a child, his family regularly told him to “comply and then follow up later,” be it with teachers or police. His effort to change police practices after the shooting death of Rice is an example of that strategy.

“For our sake, we had better be good,” he said. “Real lives are at stake.”