Sunday in the Park with Shaker 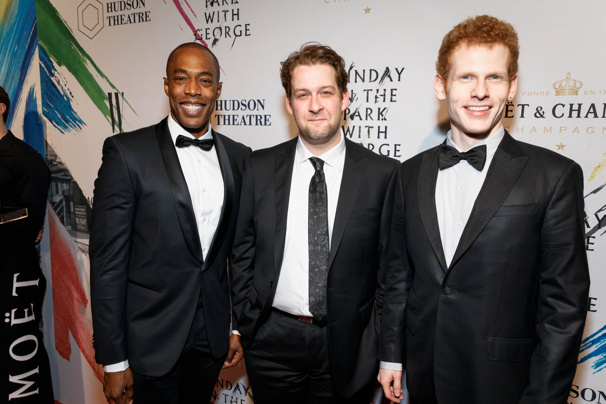 Shaker graduates Michael McElroy, Andrew Kober and Max Chernin at the opening night of “Sunday in the Park with George,” which ran for 10 weeks on Broadway. All three participated in Shaker Theatre productions, including New Stages and Shakespeare’s “Twelfth Night.”

From sharing a high school stage to sharing a dressing room, three Shaker alumni are making it big on Broadway.

The former SHHS students are appearing in the Broadway production of “Sunday in the Park with George,” which began its run Feb. 23 at the Hudson Theater. Andrew Kober (‘02), Max Chernin (‘08) and Michael McElroy (‘85) all studied in and performed with the SHHS Theatre Department.

“I would like to get these odds. We have  a long list — Every year since 1991 there’s been somebody from [Shaker theater] in a Broadway show, sometimes a couple in a year — but never before three in one show,” Playwriting Program Director Christine McBurney said.

“Sunday in the Park with George” is a musical featuring songs written by Stephen Sondheim. The show, inspired by the George Seurat painting “A Sunday Afternoon on the Island of La Grande Jatte,” follows the story of George and his lover, Dot, as George tries to complete his painting, while every choice he makes affects future generations. Chernin and McElroy are both members of the ensemble and Kober is a swing, meaning he has several parts memorized and can step into any one at a moment’s notice.

Prior to New Stages 35, the three alumni, wearing Shaker gear in their shared dressing room, filmed a good-luck video for the New Stages cast and shared it with McBurney.

Despite their busy schedules, Kober, Chernin and McElroy always try to visit their roots at the theatre department and offer students any advice they need.

“Every time [McElroy] is on a national tour and he comes through Cleveland, we’ll take the students to Playhouse Square, and after an exhausting two hours of singing and dancing, he’ll spend another two hours talking to us,” McBurney said.

Students get the chance to ask about performing arts colleges and the audition process, as well as ask for advice on nearly every aspect of theater. “I had the opportunity to come back and speak with some students several years back, which was truly gratifying,” Kober said.

Kober graduated from Carnegie Mellon University with a Bachelor of Fine Arts in acting before moving to New York City. He has appeared on Broadway in a featured role in the 2009 revival of “Hair,” as well as in ensemble roles in “Les Miserables” and “She Loves Me.”

“Shaker gave me a jumpstart on training that actors don’t usually get until college. I felt prepared, grounded and really ready to collaborate, which I think is unique to Shaker,” Chernin said.

Chernin attended the University of Cincinnati’s College Conservatory of Music and graduated with a BFA in musical theatre. He also appeared on Broadway in the cast of “Bright Star,” where he performed in the ensemble and as an understudy. While a freshman at Shaker, Chernin listened to a talk given at the school by fellow castmember McElroy.

As a student, Chernin wasn’t very invested in science or math, he said. He spent much of the day in theater-related classes, which taught him about the diverse opportunities within theater.

“It’s incredibly important for students to see that you can pursue a career in the theater,” Chernin said. During fall of the 2016-17 school year, Chernin returned to Shaker to give a talk to the freshman class. He said he felt that everything had come full circle.

In addition to starring on Broadway, McElroy teaches at the New York University Tisch School of the Arts and founded Broadway Inspirational Voices (BIV), a gospel-choir group featuring Broadway performers. He graduated from Carnegie Mellon with a BFA in Drama and, in 2005, received a Grammy nomination for arranging a holiday CD with BIV. While at Shaker, McElroy appeared in the first production of New Stages.

“It shows them that if you want something, what’s stopping you from getting it?” McBurney said.

McElroy said, “It’s rare to find a school today that places such a huge focus on the arts, but also the community that supports it as well. The theater program was an enigma.”