Study Early or Late, But Never During Lunch

Despite advice to pace exam prep over weeks, students say the week before finals is the time 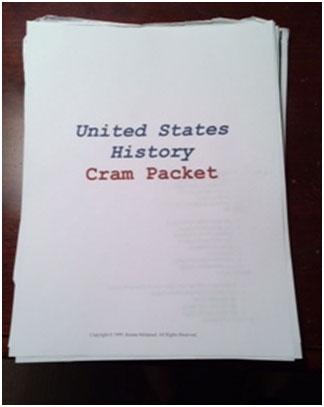 The title of this exam prep packet demonstrates the typical approach to studying.

Every year, the advice comes in waves.

Start early by reviewing your notes. Make appointments to come to conferences for review. Complete the study packet. The list of exam prep strategies is long, and every one of them supposedly works better if started early.

Although students are bombarded with advice from teachers, counselors, parents, and siblings on how to study for semester exams, they say they are not usually able to take advantage of those suggestions.

“I try my best to balance out my studying, but it can be tough,” sophomore Christy O’Connell said.

Teachers often tell their students to spread out their studying to reduce stress, but often that is difficult because of the busy lives most high schoolers lead. So, most students find themselves cramming all their studying in the week leading up to finals.

Senior Shaun Roy, who is in all AP classes, agrees that it can be tough to spread out the workload. “In an ideal world one would spread out the studying a few weeks in advance, but that’s not always possible,” Roy said. “I tend to study diligently the week leading up to finals, so effectively cramming but not to an extent of the night before.”

O’Connell also does her best to pace the studying that precedes multiple finals. “I try to spread it out, but it’s hard with all the stuff we need to know for each final,” O’Connell said.

Research completed at California State University Fullerton suggests one effective studying strategy is to spread out the workload over the course of a few weeks and keep a simple routine of a few hours a day. The study also recommend only going through a light review the night before a test.

Freshman Daniel Ritts believes he will spread out his studying heading into his first round of finals. “I think I’ll probably study a little bit each night instead of cramming it in the night before,” Ritts said.

No matter which strategy students employ, they share one particular philosophy: the lunch break between finals is not a study session.

“I usually prefer to use the break between finals to relax,” Roy said. “However if I have a subject I need to do especially well on, I’ll glance over my notes a little during lunch.”

The hour and a half break can be used in a variety of ways. Some people go out to lunch or relax at friends’ houses, but few said they do any intensive studying. “I don’t think I’ll study at all during lunch,” Ritts said. “I’m not that worried and I want to have a break in between.”

O’Connell also agreed that the break between finals really is a “break.” “I prefer to chill at lunch and not think about studying,” O’Connell said. “It’s like our two hours of freedom during finals.”

Even after spreading out their studies to some extent the stress that comes with finals is still high.

“Even as a senior I wouldn’t say I’m necessarily prepared for finals,” Roy said. “I know the process, but no matter how you study, it’s hard to be completely prepared.”