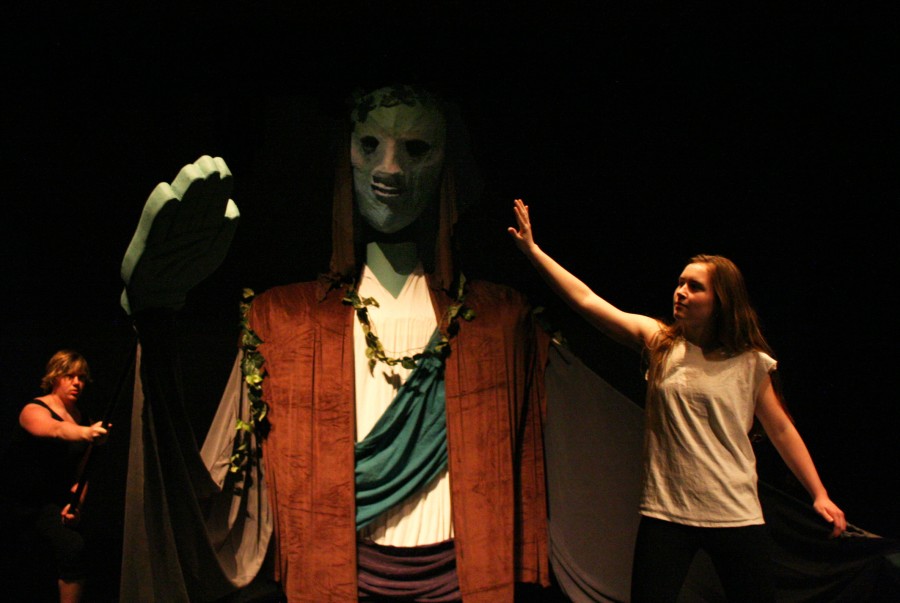 Parents cried, students danced and the puppet’s head fell off during the 2015 spring Ensemble show. Eventful, to say the least.

Ensemble’s 36th year was celebrated with their spring performance of “Rough Magic,” Ensemble’s adaptation of William Shakespeare’s “The Tempest.”

Freshman Ruby Gibson, a member of the Junior Ensemble, portrayed the naive Miranda in her ensemble’s piece. “Ensemble is a group in which everyone works together to make something totally awesome, and to do that, we need to trust each other. And we do,” she said. Ensemble collaborates to create movement pieces, monologues, songs and other pieces of theatre, with so much movement and trust that the Junior Ensemble class can be taken for physical education credit.

Stacey Reed, parent of Advanced Ensemble member Lauren Reed, defined the ensemble program specifically. “Ensemble provides a unique opportunity for students to express themselves and the material through a variety of mediums,” Reed said. Often, songwriters, poets and and other artists will come to ensemble classes and create such material in collaboration with class members. Also, through movement, the ensemble expresses feelings, thoughts, or personalities, especially in the ensemble show.

Theatre Department Chairman Scott Sumerak and Ensemble Program Director Erik Johnson–who will be leaving next year to pursue a master’s degree in creative writing at the University of Oregon–created this Shakespearean adaptation to become a course of study and focused on some of the main characters through four student-written and student performed songs.

The mysterious puppet in the auditorium portrayed the character Prospero and was carefully created by the Stagecraft class. Two seniors, Noah Silberman and Davionne Gooden, both members of the Senior Ensemble, operated the arms of the puppet while junior Ruth Geye operated the head. Senior Rachel Krause provided the voice. As with any theatrical performance, there were mistakes, including when the head of the Prospero puppet fell to the ground during Friday night’s performance. Actors were able to recover it by the end of the show.

Instead of a show with a script and lines, the annual spring show includes songs, movement pieces and some lines and monologues interspersed throughout. The variety of performances can require more effort from the audience to understand.

Even though it was not an existing scripted play or musical, the show was cohesive. “The sweet Junior Ensemble piece, the Advanced Ensemble’s dark take on Caliban, the Senior Ensemble’s dream piece, the storm, the four songs we wrote . . .  it all came together,” Gibson said.

“I do think Ensemble also stretches and challenges the audience to experience a different form of theatre than traditional plays and musicals,” Reed said. “While I may not always ‘get it,’ I can appreciate the time and energy it takes to create a show like this.”

At the end of the Junior Ensemble’s piece, the freshmen presented the student-written song “Here I Go.” The song ended with an a capella verse sung by Gibson. She said, “It was really powerful; I’m fairly certain some audience members, specifically the parents, were crying.”