Running towards a brighter tomorrow 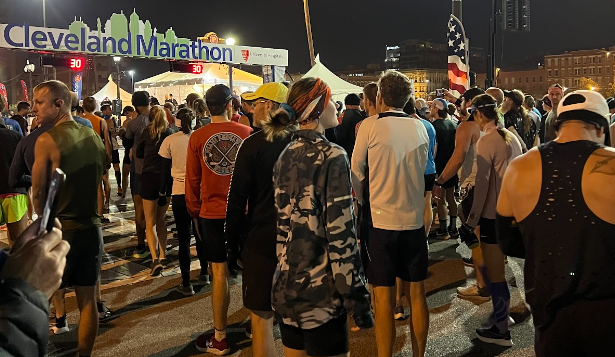 Runners on the starting line of the 2021 Cleveland Marathon

In March 2020, gyms, schools and offices shut down. Some people wanted to leave their houses, some needed an escape from reality. Some realized they had time for forgotten New Year’s resolution fitness goals, but without access to gyms, workouts and workout locations had to get creative.

For many people, running was their solution. What once was the most dreaded activity of high school gym class became the holy grail of fitness for new athletes and long-time athletes alike.

Sophomore Nora Chevraux, who was in 8th grade March 2020, started running for the first time during the pandemic and joined the cross-country team her freshman year at a friend’s suggestion. “It’s time when I can de-stress and relax,” Chevraux said about her experience with running. For her, running has been particularly helpful in helping to pass time and stay calm during the pandemic.

Running was practical to start during the pandemic as all one really needs is a pair of shoes. Although many avid runners opt for traditional running shoes such as Nike, Brooks or New Balance, runners can be seen in everything from Converse to barefoot. However, as the stock market crashed and money became uncertain in March 2020 as the pandemic, not everyone wanted or could afford a new pair of running shoes. In these early months of the pandemic, people could be seen running in everything from the latest model of Brooks to barefoot. By July 2020, running shoe sales saw a massive increase. One brand, On Running, saw sales increase 200 percent.

According to Ball State University Graduate Assistant in Sport and Exercise Psychology Kayla Myers, exercise and light physical activity help improve mental health. “Both of them have been found to have improved and significant impacts on mental health and well being,” Myers said.

One study found that running can be as effective as psychotherapy in treating depression.  Myers said that exercise in general can improve mental health. The large jump in interest in running during the pandemic can be attributed to some of the excellent psychological benefits it provides. “Seeing that exercise, something that we can all control, is just as effective as some of these treatments for depression as well as other mental illnesses such as anxiety kind of shows that correlation to a greater strength,” Myers said.

Myers said many people were outside during the warmer months of the pandemic but as winter approached, the numbers of outdoor athletes saw a dip.  “As it got into the winter season you could see a significant decrease in the number of individuals outside being active,” Myers said.

The Shaker Heights High School cross-country community has not seen the same growth as the rest of the world. “I actually don’t think our numbers have gone up,” Coach David Englander wrote about the team’s relative size before and after the pandemic. “I think our ability to interact with the middle school runners and establish that connection has been hampered by the pandemic,” he said. Despite the lack of growth the team has experienced during the pandemic, novice and veteran runners continue to join the team each year, like Chevraux did her freshman year.

In 2009, the app Strava was released. Just before the pandemic in Feb. 2020, Strava surpassed 3 billion activity uploads. With each upload, athletes can interact with each other from anywhere in the world and compete against each other with monthly challenges created by Strava.  For runners like Chevraux, running is about community. She said, “It’s more than just a sport.”