St. Baldrick's event created by the class of 2018 raises more than $7,000 to fight childhood cancer 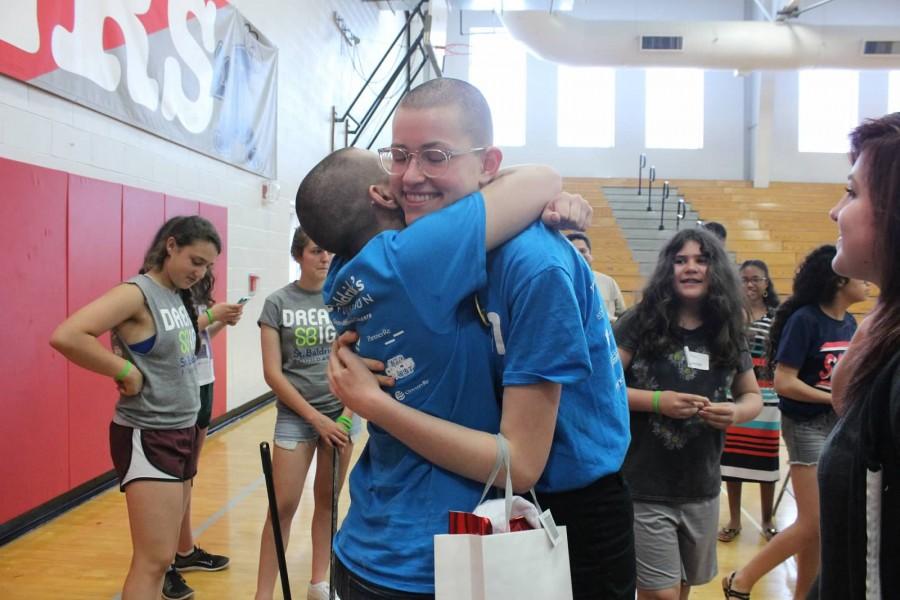 Freshman Sophia Solganik and Emma Duhamel embrace after both shaving their heads for St. Baldrick's.

Raising awareness for a cause can come in many forms, but the St. Baldrick Foundation’s Shave a Life event brings a new twist to charity.

On May 29 after school, Freshman Emma Duhamel and the class of 2018 Student Council brought this head-shaving phenomenon to Shaker.

St. Baldrick’s is a foundation and charity that helps provide funding for childhood cancer research. It relies on people paying participants to shave their heads, an act of solidarity with those who lose their hair to chemotherapy.

Duhamel is class of 2018 Student Council president and chief coordinator of the event. She was inspired by Cleveland Heights High School’s event. “It definitely inspired me to see that just a few people can come together and make an event that actually does make a difference,” she said prior to the event. “There was something I could do that could actually make a difference.”

Freshman Sophia Solganik is the class of 2018 Student Council treasurer. “I was thinking about my own siblings, and if they had cancer, I definitely would do it for them. Then I remembered that there are so many kids in the world who don’t have siblings [because of childhood cancer], and I wanted to fill that gap,” she said.

Sophomore Sheila Scanlon decided to shave her head in support of her family as well. “A lot of my family have had cancer before. Shaving my head is just one way to show it,” she said. “People ask about it, and I can tell them about it.”

“I heard a few months ago because Emma Duhamel made an announcement in my science class that she was going to shave her head,” said freshman Noa Immerman. “It just seemed really cool. A lot of my friends are shaving their heads, and I just wanted to support my class.”

Sophomore Rebecca Shankman also has friends who accepted the challenge. “I have a lot of friends shaving their heads and I thought it would be pretty cool to watch them,” she said.

“It was Emma’s idea. She’s a great girl, and I have faith in her,” Berger said.

“I could not be happier with it. I admit, at first, I was really worried that the event would just be kind of a small thing,” Duhamel said. “It turned out to be the complete opposite. It’s just beautiful to see how much people really do care.”

Duhamel used posters, flyers and social media to advertise the event, as well as announcements on the PA system. “The past days when it has been on the announcements, my class hasn’t listened to the other announcements, but when this came on, the classroom became silent,” Shankman said.

A bake sale, pizza, henna temporary tattoos, face painting and caricatures were available during the event.

“Even though the topic of the event is childhood cancer, and that’s a serious and sad thing, what we’re doing at the event is celebrating the fact that people are trying to make a difference in the lives of children with cancer,” Duhamel said.

Freshman Sydney Fiesler operated the henna tattoo station. “I think that people shaving their head will definitely raise awareness,” she said. “I think that raising awareness in our school is great, because I personally know children who have leukemia.”

“I wanted to raise money for cancer, and I was told that I need a haircut, a lot,” freshman Greyson Turner said.

Duhamel predicts another St. Baldrick’s event next year. But for now, Shave a Life was successful. “We’ve raised so much awareness and so much money for a cause that doesn’t always get the love and care it deserves.”