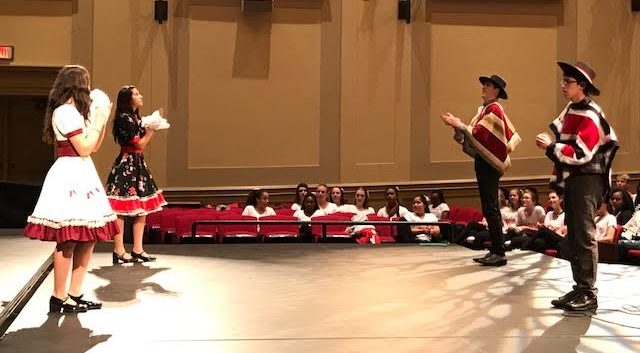 Exchange students from Concepcion, Chile perform a traditional dance during a welcome assembly in the Large Auditorium Sept. 11.

At the Sept. 11 Chilean assembly, organized by the Spanish Club Mano en Mano, Shaker student hosts welcomed the Chilean exchange students and their teachers. The German assembly, hosted by the German Club, introduced the German contingent and their Shaker host students Sept. 18.

The second-period Chilean assembly informed attendees about Chilean culture, while the German assembly focused on the Goslar exchange and Shaker students’ experiences abroad.

As students took their seats in both assemblies, the drum line, Raiderettes and cheerleaders danced energetically along with a video of Beyonce performing “Move Your Body” with students in a school cafeteria setting.

Spanish teacher Kimberly Ponce de Leon greeted the audience and welcomed the visitors from Concepcion, Chile. She said Chilean students have visited Shaker three times and 11 Shaker students and three teachers visited Chile for the first time over the summer.

Principal Jonathan Kuenhle then welcomed the Chilean contingent.  “Good morning,” he said. “Buenos dias, and welcome to the Shaker Heights High School.” Afterward, he sang the Star Spangled Banner, and the Chilean anthem was broadcast and lyrics displayed on screen.

At the invitation of Mano en Mano leaders Malka Steinberg and Isabella Ponce de Leon, the attendees then observed a moment of silence to remember the Sept. 11, 2001 terrorist attacks in the United States and the Sept. 11, 1973 Chilean military coup. The Chanticleers than sang to pay respect to victims of both events.

Four of the Chilean students, who wore elaborate traditional dress, then performed two dances for an appreciative audience.

After an exciting round of Kahoot! that interactively quizzed students about Chilean culture, geography and history, Shaker students were invited to the stage to learn Chile’s national dance, the Cueca.

The ninth-period German assembly began with a performance from the Shaker Chamber Orchestra, after which Kuehnle gave a welcoming speech in both German and English.

In both assemblies, the students and their hosts took the stage to be introduced. “Hi, my name is Lucas and I am very happy to be here,” said Lucas Soto, one of the Chilean exchanges.

Felix Benk, a German exchange student, was excited to be traveling to Shaker Heights. “Thank you so much for welcoming us so warmly,” he said. “[I] literally can’t wait to meet all of you.”

Ethan Adams and Charlie Miller, German IV students who took part in the Goslar exchange program last summer, presented a video showing highlights from their trip. The video, spanning Goslar, Berlin and Munich, showed the Germans and Americans riding mining carts, attending classes and enjoying the scenery, among other activities.

Seniors Schuyler Butze and Mattheus Schweitzer, along with junior Ellie Vahey, welcomed on stage juniors Kelan Coate and Camille Lamb, who will go to Goslar next semester. The exchange program veterans provided words of advice and congratulations. “Don’t be afraid to make mistakes, because you’ll make a lot,” Butze said.

One German exchange student asked another to homecoming on stage, drawing cheers from the audience. The Shaker Heights Dance Club also performed in the German assembly. In the middle of the choreography, one of the dance club members asked another member to homecoming, resulting in another enthusiastic response from the crowd.

“Times will get better by sharing culture, by opening our hearts to other cultures,” said Frau Susan Stein, one of two chaperones for the Goslar exchange.