One of Cambodia's best-known and most distinctive landmarks, the Bayon is a famed temple in Angkor Thom, Cambodia. King Jayavarmanordered the construction of the Bayon, social studies teacher Amanda Ahren's favorite place in Cambodia, in the late 12th or early 13th century. The Ecole Française d'Extrême Orient restored the structure in the 1900s, and it has remained a popular tourist destination.

Shaker students have traveled to Quebec, Germany and China through school before. For the first time, Shaker is adding Cambodia to that list.

For three years, social studies teacher Amanda Ahrens has been trying to get the trip approved. She traveled to Cambodia with some friends while teaching in China years ago, and has wanted to plan a service trip ever since.

“I experienced travel through Shaker Heights my sophomore year with the band to Turkey. It was a phenomenal opportunity that I would love to make a reality again,” said senior Ana Mitchell. “I figured that Cambodia is a place that I wouldn’t be as likely to travel to if it wasn’t for Ms. Ahrens setting up this program, so decided to take the opportunity.”

“A third to half of the trip is service-based,” said Ahrens. “Our initial goal is service, but the trip has three goals: service, immersion, history of the genocide and ancient history.”

“The service activities haven’t been determined yet,” said senior Lily Abrams. “We will provide whatever service is needed in the community.”

Abrams became interested in the trip after hearing about it from her teacher. “I was interested in immersing myself in a culture that I know little about. Also, I love to travel, and going to Southeast Asia is an amazing opportunity,” she said. “I did some research and decided to sign up. I saw this trip as chance to step outside of my boundaries and expand my global horizon.” 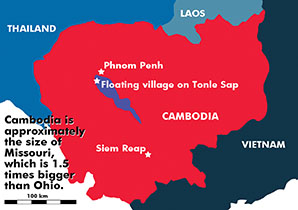 Unlike international trips by the band, choir or language programs, the Cambodia trip is available to any interested high school students.

“We wanted mostly juniors and seniors on the trip. I presented the trip to junior advisory and during class. I put up a few posters around the school, but it really spread by word of mouth,” Ahrens said.

Mitchell was one of the people to find out about the trip that way. “At the end of my junior year my friend Lily, who is also on the trip, notified me about it after Ms. Ahrens told her. I immediately was interested and when school started in the fall I applied,” she said.

Cambodia is particularly famed for its world renowned ancient temple city, Angkor, home to Angkor Wat, one famous Cambodian temple.
“It’s this temple that’s supposedly one of the most beautiful sights in the world. There’s actually a fungus destroying it, so it’s on one of these must see lists of places to see,” said Brian Berger, social studies teacher, who is working with Ms. Ahrens to plan the trip.

“One of the highlights will definitely be going to Angkor Wat,” said Abrams. “We have the whole day to explore the ancient temple. We will also be attending a Cambodian circus, staying in a floating village, learning the basics of the Khmer language and visiting the killing fields.”

“Obviously [they will learn about] Cambodian culture. They’ll see what a developing nation is going through,” Berger said.

The Communist Khmer Rouge regime incited the Cambodian genocide, which began in 1975 and lasted until 1979. The genocide occurred as the Khmer Rouge leader, Pol Pot, attempted to establish an agrarian society based on the principles of Stalinism and Maoism.The regime killed 1.7 million people in pursuit of that goal.

The Khmer Rouge forced thousands to relocate, using torture and mass executions to incite fear. Twenty-five percent of the total population was killed before the genocide ended with the Vietnamese invasion of Cambodia.

Cambodia currently has a population of about 10 million, 90-95 percent of whom are Khmer ethnic. The remaining population includes Chinese-Khmers, Khmer Islam (Chams), ethnic hill-tribe people (Khmer Loeu) and Vietnamese.

Despite a rocky past, tourism is a major part of Cambodia’s economy today. According to the Cambodian Ministry of Tourism the number of international tourists in Cambodia increased from 2.88 million in 2011 to 3.58 million in 2012.

Mitchell, however, is looking forward to a less touristy opportunity. “The floating village sounds like it will be an experience like no other,” she said. “We will be staying the night with a family on the boat-like houses and learning to cook meals and hopefully pick up some of the language.”

Abrams agreed. “I am excited about our stay in the floating villages. We will be living with a family and living their daily life. Each day, a few of us will learn how to cook the traditional Khmer cuisine,” said Abrams. “Staying in the floating villages is a completely different experience than traveling to the tourist attractions and the best way to learn about the culture.”

“Ms. Ahrens has been working on this for several years, so it’s been a work in progress and no one has had the work or insight to do a trip to Cambodia. It’s been a lot of work for her, a lot of details. It’s a big trip, so a lot goes into it,” said Berger.

“Initially it was just me taking the kids, and there was some resistance,” said Ahrens. The district was apprehensive about letting Ahrens take students to an unfamiliar foreign country alone. “We paired with Rustic Pathways, and now we have an in-country representative, two local guides, one non-local guide and chaperones. Safety is Rustic Pathways’ number one game, so people felt better after we teamed up.”

While the trip provides many extraordinary opportunities, Mitchell said she is simply “excited to see the country and get to know the girls that I will be traveling with.”