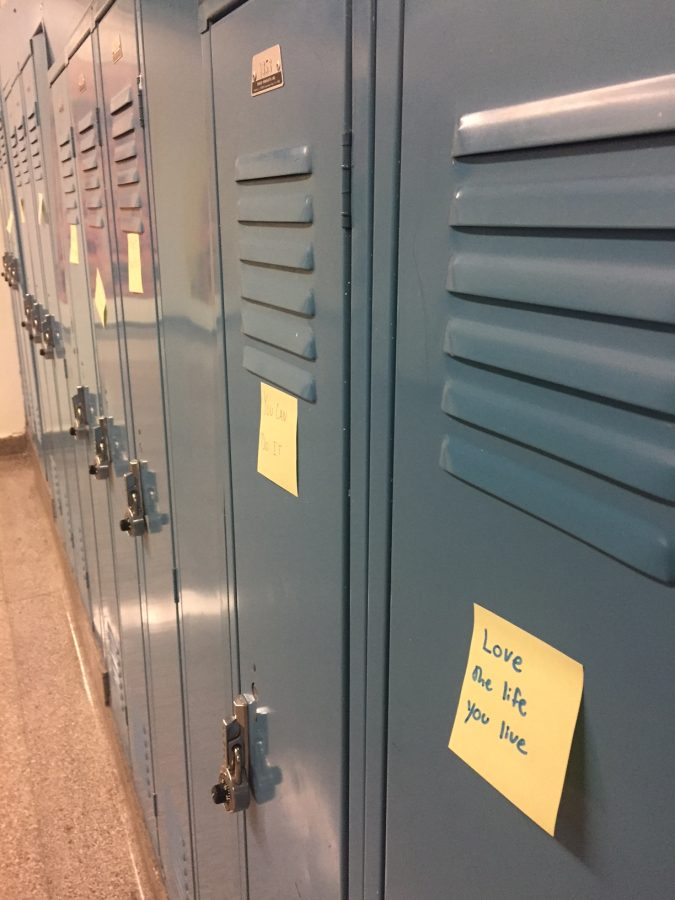 Encouraging messages were distributed on lockers the first morning of second semester.

Returning from a tumultuous week of finals and the inauguration of Donald Trump, students arrived at school to find their lockers adorned with sticky notes spouting encouraging messages.

The Student Athlete Leadership Team organized the sticky note activity for Monday, Jan. 23. As English teacher Michael Babinec, the adviser, said, “It’s a group of young men and women who are nominated by their athletic coaches for their demonstration of leadership skills on and off the field.” He said that he works to find enrichment opportunities in which the group of athletes can participate and develop their leadership skills.

Athletic Director Donald Readance brought the sticky note idea to Babinec’s attention after seeing it at another school. “Obviously, it’s not an completely original idea,” he said, “He saw this and thought it would be pretty neat and asked if I knew a group of kids who might be willing to put the time into doing it and I thought that the Student Athlete Leadership Team was a perfect fit for the activity.”

Babinec said that it took the kids a little over two weeks to finish writing all the messages on the sticky notes, mostly spending time between and after final exams to do so. “One morning, they came in on a late-start Tuesday and spent about an hour and a half writing the sticky notes,” he said. Babinec thought it would be beneficial for the students in the group as well as for the rest of the school. “We knew kids were coming back after finals and would try to get started on a positive note,” he said.

Sophomore Charlotte Lo said that her sticky note brought a smile to her face on a Monday morning. “It was very nice of the Student Athlete Leadership Team to provide words of encouragement for each and every student in the school,” she said. Her sticky note featured the word “smile” with the design of the “I” and  “L” together resembling a smiley face.

The group came into school on Jan. 21 to distribute the sticky notes throughout the school. It took them over an hour and about 2,000 sticky notes to place a note on every locker.

Junior Meredith Modlin said that she thought the messages were very sweet.  “Mine said, ‘keep going,’ or something. I would have appreciated them more if they put them on the week before finals, though,” she said.

Babinec noted that the activity wasn’t intended to remain anonymous. “All the credit goes to the student athletes,” he said. He added that although many of the students were occupied with finals and winter sports, he applauds them for dedicating their time to encouraging other students, especially by coming to school on a Saturday.

Security officer Matthew Perkins commended the intention of the activity, but the trash caused some inconvenience for him.  “My only problem is when they take them off and they all end up on the ground,” he said. “I just wish I knew beforehand.”

The Student Athlete Leadership team was not anticipating a reward for their actions. “We didn’t really go into it with any set expectations for the activity,” Babinec said. He warned the group that not all student reactions will be positive. “They had to expect that some kids might think it’s kind of pointless or there’ll be kids who will probably just take them off their locker and throw them out, kids that throw them on the ground, kids that don’t read them, kids that make fun of it,” he said.

Junior Cielle Brady thought the sticky notes helped motivate students, but she thought they should have messages of equal motivation on each note. “I was looking across and around all the lockers and they had quotes from Tupac, they had quotes like, ‘you have to reach your dreams,’ but on my locker, there was just a smiley face,” she said. “I was very underwhelmed.”

Babinec acknowledges that the encouraging activity may go unappreciated by many students. “It’s about having the courage to go out and do that anyway,” Babinec said.

“You walk down and you see stuff on the floor and kids throwing sticky notes around, to go out and do that anyway and hope that even for a handful of kids in the whole school, it brought a smile to their face,” he said. “And it was worth the two weeks of work to do it.”