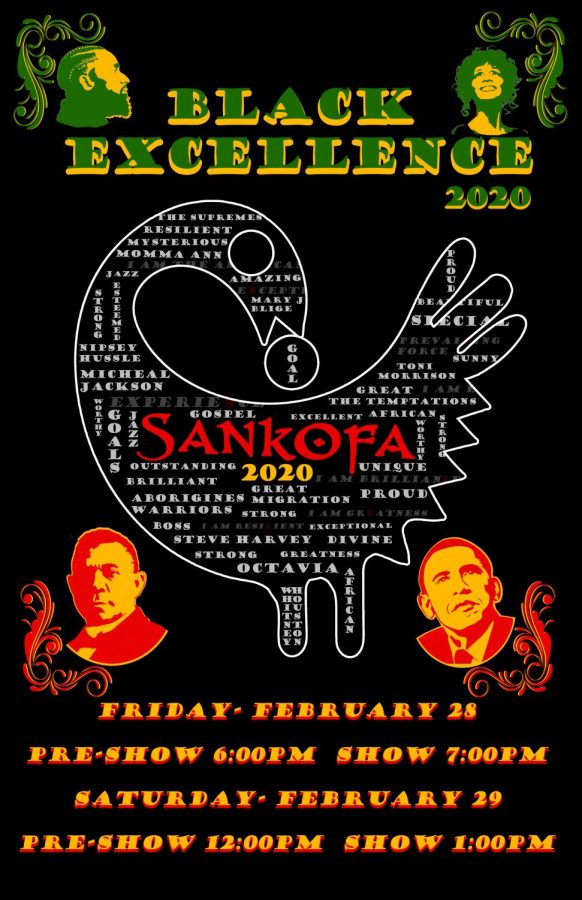 Sankofa means “Go back and get it” in Twi, a language of Ghana.

“Sankofa is a bird. It has its belly facing forward but its head turning back because it’s literally supposed to symbolize looking back on our past to go forward to our future,” senior Jared Christopher said. This is Christopher’s third year participating in Sankofa, and he is a drama leader and an actor in the production.

This year, the show’s theme is “Black Excellence.”

Sankofa adviser and art teacher Keaf Holliday said he got the inspiration for the theme from Dr. David Glasner, superintendent. “I was opening up my email, and I saw where Dr. Glasner had wrote this real interesting email about African Americans, closing the gap and doing more to support black excellence” he said.

Holliday has been advising the student-run group for 14 years, but has been involved in Sankofa for 17 years.

According to junior Isaiah Findley, the show had been criticized for containing harsh content in previous shows, so the leaders of Sankofa decided to, “not look at the negative things that have happened to our people in history, and more of the positive things we have achieved in the past decades.”

Findley has participated in Sankofa for three years, and he is currently a task leader in acting, singing and dancing. He directs and blocks for acting, is a vocal support for singers and choreographs for dancers.

“We’re kind of talking about how people overcome something that happened throughout the entire 1900s and all the way up until nowadays,” Christopher said. “The show itself is a lot of different scenes and ideas, because they’re describing different events that happened, but they all come together in one specific way.

“I think we need to help [the younger generation] remember these African-American heros, so that they can see that there’s a rich heritage to their history,” Holliday said.

“A lot of this stuff can really help the students going on, because we’re kind of giving advice and informing them on what we can do in our world to achieve,” Christopher said. “With the theme being black excellence, it also helps us find a way to use our excellence to achieve something great.”

To depict this idea, Holliday said that the group was doing a tribute to Sankofa alumni who have done significant things since they have graduated.

One example he gave was Romero Smith (’08) who participated in Sankofa for one year. Smith is a professional animator who has worked on movies such as Men In Black International, Avengers: Endgame, Star Wars: The Rise of Skywalker and more.

Since 1998, Sankofa has been staged annually in February to honor Black History Month. This year, Sankofa will take place Feb. 28-29, and tickets will be sold during lunch periods for $8.

Findley said, “I think that this show is just going to be really big and in your face and a fun time.”