Paying More Than You Think

Feeding fashion habits might be cheap, but are morals worth it? 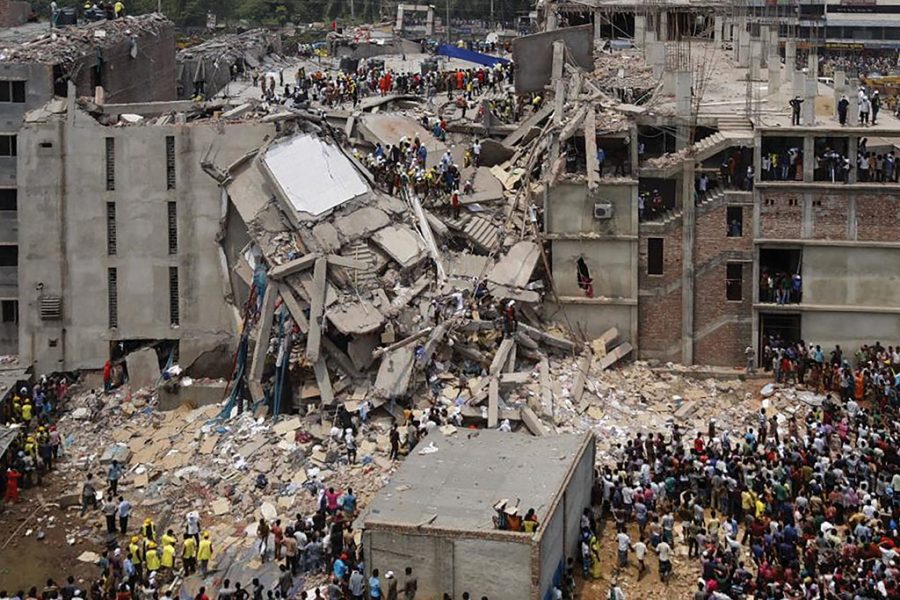 In 2013, a garment factory in Dhaka, Bangladesh collapsed, killing more than 1,000 workers.

So, among students, shopping at discounted retailers, such as Forever 21, H&M and Pacsun, is common. In 2017, H&M, the world’s second-largest apparel company, made more than $25 billion in sales. H&M is known for selling inexpensive fast fashion —  clothes that cheaply reflect designers’ current fashion collections.

On H&M’s website, camisole tops cost only $2.99, and turtleneck tops cost $5.99. Jeans and knit sweaters sell for $9.99. H&M also sells sweatshirts for as low as $25. The most expensive item is a leather coat that costs $499. Other expensive items on the website are leather jackets that cost $399.

So, why are so many H&M items so cheap? One reason is because H&M uses a lot of cheap labor. The company’s clothes are made in Bangladesh, Cambodia, China and Bulgaria, among other countries. According to salon.com, Cambodian women will sew clothing for roughly 50 cents per hour pay.

In addition, roughly 90 percent of Cambodia’s seamstresses are women. If they get pregnant, they’re often fired.

The workers who toil for our cheap clothes sometimes pay for them with their lives. On April 24, 2013, workers began a normal day by reporting to work in Rana Plaza in Bangladesh’s Dhaka District. That day, the Savar building, located in Rana Plaza, crumbled  while the workers were inside. It now holds the horrific distinction of being the site of the deadliest garment factory disaster ever. More than 1,100 people died during the collapse, and thousands more were injured.

Primark, an Irish clothing and accessories retailer, was among the few companies to admit to having done business with the factory that collapsed. Other major fashion brands are suspected to have been involved in using the factory to create their merchandise. Companies refused comment when asked if the building had been a part of their supply chain.

“It was like four or five years ago, so I don’t really remember, but many people died,” Bangladeshi exchange student Ridaka Jannah said. “So many people went to the hospital, and they donated their blood for the people who needed blood. Many people helped them.”

A lawsuit against three U.S. retailers sourcing clothes from the factory —  JCPenney, the Children’s Place and Walmart — was dismissed by a judge because it was filed past the one-year statute of limitations under Bangladeshi law. The judge also ruled that because the factory workers were not directly hired by the companies, they were not responsible for their working conditions.

The workers who survived the collapse had been telling their managers about their concerns about the cracks they had seen in the walls in the days leading up to the incident. Bangladesh has since charged 38 people with murder over this disaster, according to Time.

Five years later, and that change has still not occurred. “The people that work in the factories, they are the most underprivileged people. Most of them are from the villages, so they don’t get to study. They’re basically illiterate, so they just find a source to earn money,” Jannah said.

She continued, “They go to the factories because they can find a job there very easily because they have a lot of them. They work 18 hours a day and they still don’t get paid well.”

But do students know the conditions of the workers who make the clothes they buy?

The common answer is no.

Junior Quinn Scanlon thinks society has gotten used to shopping online. “You don’t really think about the repercussions of it, or what people went through to get it there and get it in stores,” Scanlon said.

Sophomore Cooper Cook doesn’t think about corporate behavior before he buys something, but said that he might if he hears something about it.

“I just look at the shoe, and it just looks cool, so I don’t think about who made it. I just think about how much it is,” sophomore Daniel Spector said.

Junior Sophia Stein said that she does consider the treatment of workers before buying clothes. “I watched a documentary when I was younger that talked about it, and ever since I’ve been very passionate about the topic. Since I got an exchange student from Bangladesh, and I’ve heard more about the workers there, it’s become more real to me after hearing it from someone who’s seen it themselves,”said Stein, whose family is hosting Jannah.

Senior Wendy Ye looks at the brand of the product and where it was made. She said that knowing how a brand treats its workers has some effect on her decision about whether to purchase a product. “If I really, really like the clothes, I might buy it, but usually not,” if they were produced by a company that maintains notably harsh working conditions.

H&M is not the only company to face allegations of exploiting workers.

Nike, the largest apparel company in the world, has also been known to mistreat its workers.

Eighty percent of Vietnamese Nike workers are female, and some are illegally forced to work more than the legal working week of 48 hours. In 1997, a Nike shoe plant in Vietnam was accused of exposing workers to an illegal amount of carcinogens, which can cause cancer. Seventy-seven percent of workers experienced respiratory problems, according to The New York Times.

In September, Nike was called out again for long days and low wages for factory workers.

Kaepernick has not played in the NFL since opting out of his contract with the San Francisco 49ers in 2017. This followed a season in which he was both praised and criticized for taking a knee during the National Anthem to protest racial injustice and police brutality.

The Nike campaign features Kaepernick, Lebron James, Serena Williams and Odell Beckham, Jr. Public reactions have ranged from praise to Twitter videos in which angry people cut the Nike swoosh from their socks.

Soon after the release of the Kaepernick ad, President Trump took to Twitter. “Just like the NFL, whose ratings have gone WAY DOWN, Nike is getting absolutely killed with anger and boycotts. I wonder if they had any idea that it would be this way? As far as the NFL is concerned, I just find it hard to watch, and always will, until they stand for the flag,” he wrote.

With Kaepernick trying to raise awareness about inhumane treatment of African-Americans in the eyes of the law, is it hypocritical for him to work with a company that allows workers to be mistreated in overseas factories?

“Kaepernick’s thing is fighting for equality, and that’s not equality if you’re putting people through harsh conditions. You’re profiting off of them so much. It’s not fair,” Spector said.

Sophomore Mitchell Stiefel agreed.“You can’t come out with an ad about discrimination if you don’t follow your own example,” he said.

GoodGuide is a website dedicated to providing consumers with more information about the environmental and societal impact of the products they buy. The site ranks companies on a scale of one to 10 (10 being the best and one being the worst). Twenty common brands students wear score less than a five on the GoodGuide scale. These include Abercrombie and Fitch, Aeropostale, American Eagle, Anthropologie, Bebe, Diesel, Forever 21, Free People, Guess, Hollister, J. Crew, Kohls, Loft, Lucky, Madewell, Quicksilver, Roxy, Topshop, Urban Outfitters and White House Black Market.

To send a message to such companies, people find a way to avoid buying their products. Senior Camille Lamb prefers shopping at vintage stores, which is a cheaper and more ethical way to buy clothes.  Junior Lailah Perry likes to shop at thrift stores, such as Avalon Exchange and Plato’s Closet. Thrift store shopping saves money and reduces your carbon footprint.

The Environmental Club has recognized how the fast fashion industry affects workers, their families, and the world. Science teacher Maggie Parks, the club adviser, worked with students to put together a school clothing swap in an effort to reduce unethical consumption.  Students brought in clothes and exchanged them for items others brought to the swap.

The Environmental Club would like to continue this effort by organizing a clothing swap this winter.  Students will receive tickets when they bring in items that they can exchange for other pieces the day of the exchange.

A louder way to communicate disapproval of a corporation’s labor practices is by organizing a boycott.

“I think that it would be a good start, but to get everybody around the world to boycott would be a big challenge,” junior Reese Pulver said.