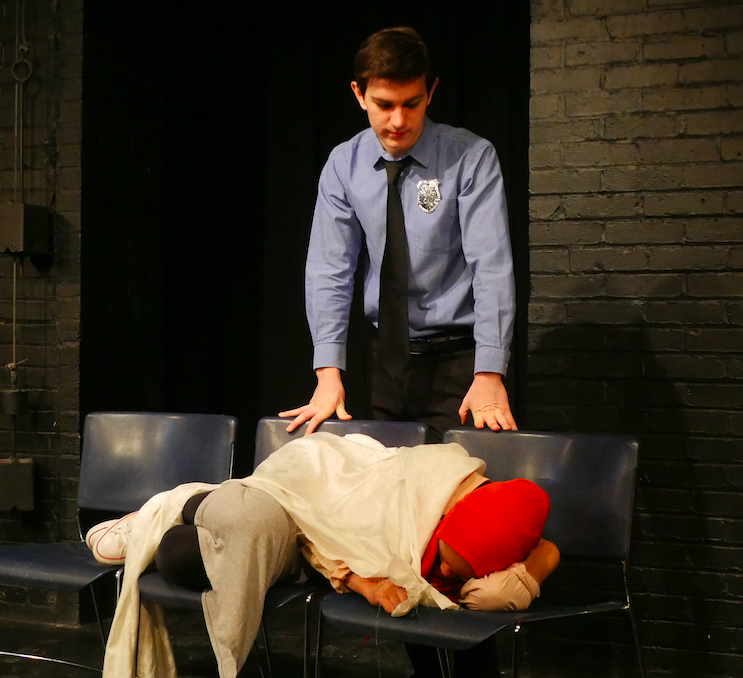 "I Spy" written by senior Gus Mahoney featured a refugee child and airport official connecting in an airport.

From immigration to race, New Stages 35’s stunning and glorious effect was profoundly political, while remaining amusing and enjoyable.

New Stages is an annual production almost entirely run by students, with the assistance of Playwriting Program Director and Directing Coach Christine McBurney. Each play features a different story directed and performed by students. Located in the Black Box theatre in the basement of the high school, New Stages provides a personal atmosphere between the audience and actors on stage.

Starting off strong the first play, “Aaah! The Floor is Lava” by junior Ruby Gibson, featured the reunion of two sisters after several years. While the background is not known it is clear that something serious created a chasm between the two, and could only be healed through the nostalgic games of their childhood. The balance between imaginative games and the seriousness of family relationships created an enjoyable story that produced laughs and a desire for the sisters to reconnect.

With a more serious story, “Out the Window” by junior Toni Watterson created a heart-wrenching effect on the audience. With only two characters, the dynamic performances of junior Sydney Fieseler and sophomore Miles McCallum created a lasting impression and incited emotional reactions from the audience, telling the story of a depressed girl and a friend who tries to help her combat her fear.

“Arby’s” written by senior Nora Spadoni provided comedic relief while still sharing the importance of following your dreams even if they take you far away. Junior Margaret Bartimole and seniors Sarah Manuszak and Franklin Potiker nailed each comedic line and had everyone laughing with their performances.

Following a strong act one, the second act was not afraid bring up serious issues and start conversations.

Sophomore Olivia La Rue wrote an emotional story about substance abuse within a family, and the discovery of the issue by a best friend, in “Yellow Buttons,” told about the importance of confiding in your friends and asking for help.

The writers were not afraid to create important plays that featured different stories which need to be told. A particularly proximate story was told in “I Spy” by senior Gus Mahoney which featured a refugee child entering America for the first time and the connection she makes with an airport official while separated from her mother. Tension could be felt in the small theater due to the strong performances of freshman Farhaanah Alim and senior Carl Berner as their characters connected through a game of I Spy.

The final performance of the night was certainly a show stopper. “A Seat at the Table” written by junior Samira Colbert featured a white family whose daughter, played by senior Lillian Baum, had invited her girlfriend over to dinner to meet her parents. As a shock to the parents played by seniors Rose McCandless and Brian Johnson, their daughters’ girlfriend was African-American, who was played by sophomore Monet Bouie. The story followed an uncomfortable dinner in which the parents ask questions that they don’t realize are racist, and shows the importance of conversations on race. All the while still retaining a comedic element in the story. Colbert’s writing showed how to approach uncomfortable situations of racism, and not reacting with anger, but with education.

New Stages is the chance for students who are not typically involved in theatre to showcase their talent alongside theatre department regulars. While student performances in New Stages always impress, the enormous effort of this year’s cast set it apart from the rest.