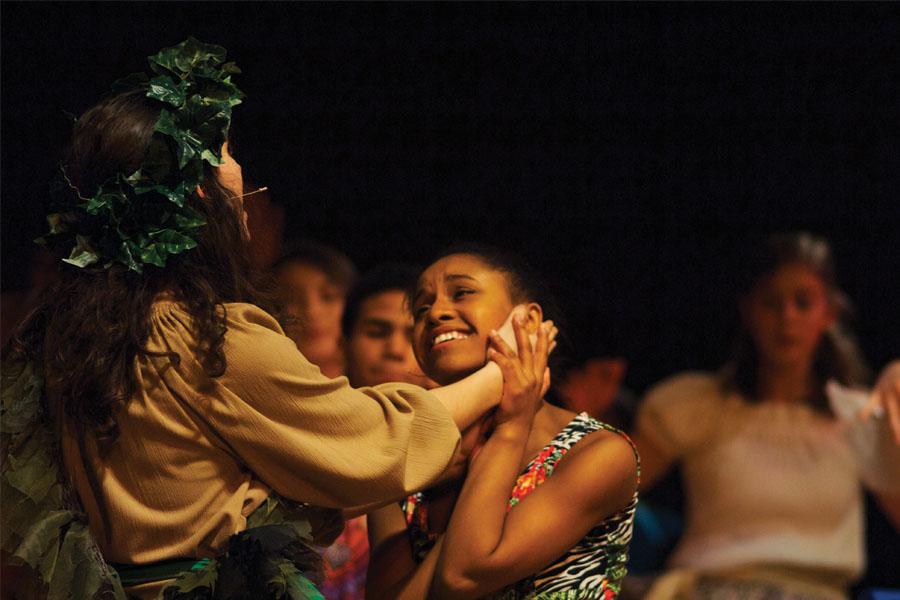 Ti Moune, portrayed by sophomore Lauryn Hobbs, listens to junior Klara Hricik's Asake, mother of the earth, during the Nov. 20 "Once on This Island" preview.

Set in post-colonial Haiti, “Once on This Island” is the story of a young girl, Ti Moune, and her quest to make a prince fall in love with her. Much of the play is done through storytelling and resembles beloved fairy tales such as “The Little Mermaid” and “Cinderella.”

New Theatre Department Chairman Scott J. Sumerak chose this contemporary musical as the fall production. The show debuted on Broadway in 1990 and is based on the novel “My Love, My Love” by Rosa Guy. The script and lyrics are by Lynn Ahrens and the music by Stephen Flaherty.

“I’m not a big fan of old, classical theatre,” Sumerak said. “I also love the story and the music.”

Sumerak recently moved here from Chicago with his wife and infant. He credits the students and staff for an easy transition to his new job and city. “It’s been a really great, big year,” he said.

The show was announced in mid-September, and auditions were held at the end of that month. Rehearsals started immediately after parts were chosen. “We have a very young cast [primarily 9th and 10th graders], which is really cool. You watch rehearsal and think, ‘Wow, there’s the future of the department,’ ” Sumerak said.

Sumerak took a contemporary approach to staging the show, which includes just five props. “The big adjustment I made is that we’re doing no set changes, no costume changes, and many of the props are made by the actors themselves. We were able to take a couple of risks, and the actors were up for the challenge,” Sumerak said. For example, at one point in the show, a hurricane is simulated entirely by actors.

Sophomore Hannah Turrell portrays Erzulie, the goddess of love. “I tried out for the show because a lot of my friends were involved, and I know that it’s a great way to meet new people,” she said. “My favorite part about my role has been getting to discover my vulnerability.”

Junior Dayvon Rose plays the part of Tonton Julian, the father of Ti Moune. This is his first lead role in a Shaker theatre production. “I’m a little bit nervous because I have more weight on the show than I usually have,” Rose said. A seasoned member of Shaker theatre, Rose was happy to see his younger fellow cast members join the experience. “It was really fun working with a lot of people on the show, especially the 9th graders as [the play] helped them to become a lot more comfortable with the high school.”

“An idea that comes up in the musical is the idea of a rich and a poor side of the island,” wrote sophomore Sophia Ciccarelli in a section of the show’s program. “This is actually representative of what life is really like on the island of Hispaniola.”