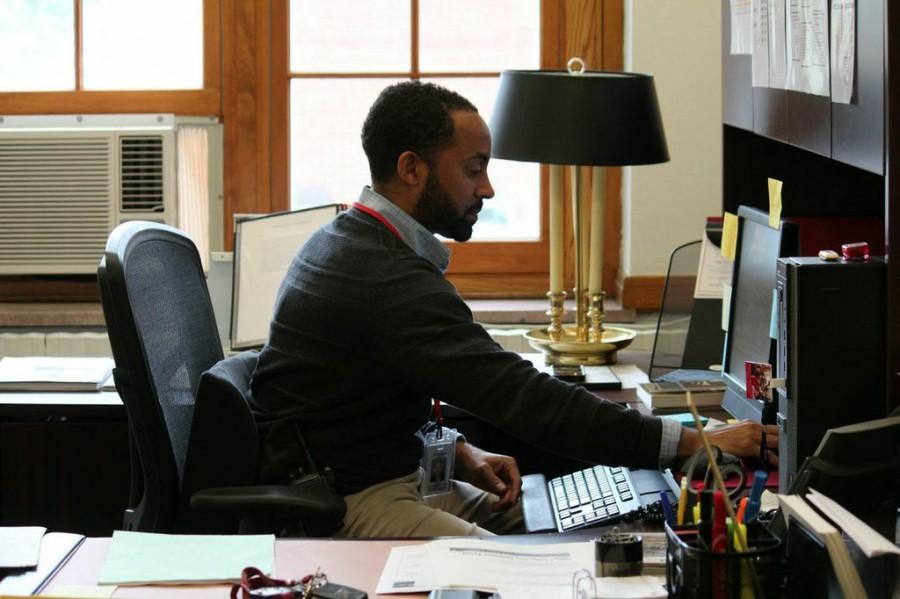 Dean of Students Jon Moorehead works at his office computer. Moorehead addresses low-level behavioral offenses and will help to establish a restorative justice program at the high school.

Dean of Students Jon Moorehead, the newest addition to the high school’s administration, works far beyond his corner office.

“[I like to be] an extra presence for the teachers to just let them know that I’m there to support,” he said. “That way, the kids also get to know my face and know who I am and know that I’m not just the guy waiting down in the office to give you a detention or suspension.”

However, the Ohio Teacher Evaluation System has “greatly increased our workload in two areas: the number of meetings and paperwork,” according to Assistant Principal Ann Spurrier, leaving assistant principals struggling to juggle both duties.

Starting last year, state law mandated a new teacher evaluation system, known as OTES. This system mandates that administrators perform two observations, a walkthough observation, pre- and post-observation meetings and a final evaluation meeting with every teacher. In addition, adminstrators have to prepare paper forms and enter observation data into a state system.

Assistant Principal Sara Joyce said Moorehead’s disciplinary work gives the assistant principals more time to complete their OTES tasks.“It gives us a little bit more time to look at more in depth things that are on our plates,” she said. “There aren’t students coming in on a routine basis.”

Spurrier agreed that the new position “will tremendously help our workload.”

In addition to taking on some of the assistant principals’ disciplinary tasks, Moorehead was also hired to implement the new restorative justice program.

“The real purpose of the program is to try and create a community where all members feel invested . . . We want people to have the mindset that, being in classroom, everyone has the right to an education, and my choice to create disruption in the classroom took away education from others,” Principal Michael Griffith said, invoking a student’s persona to illustrate his point.

Restorative Practices in Bethlehem, Pennsylvania. At the conference, they were to learn methods to improve behavior in schools and develop community. The trip costs the district $3,080.

“For kids in urban school districts that have some academic issues, [the program] gives them a space to discuss the issues that they are facing,” Moorehead said.

“If they had some sort of confrontation or conflict with another student, it gives them an opportunity to talk all those things out, almost like in a peace circle,” he said. Studies in the United Kingdom, Scotland and Pennsylvania found that implementing restorative practices by discussing issues such as bullying and fighting improved schools’ learning environments and lessened disruptive behavior.

“It is a perfect [system] for us in that it is a focus on relationship building,” said Griffith. “If we’re working together in the community in a positive way . . . behavioral challenges are reduced.”

Moorehead’s experience will help incorporate this new approach. He has worked with students at Scott High School in Toledo, Canal Winchester High School and Columbus State Community College. He earned a bachelor’s degree in business administration from the University of Toledo as an information technology major and business law minor.

He also has a master’s degree in education from Bowling Green State University, and just completed a one-year postgraduate fellowship at Harvard University in higher education administration.

While he has worked in a variety of educational environments, he calls Shaker High his “comfort zone.”

“It reminds me more of what I did with Toledo public schools, so it plays right into my strengths,” he said.

In Toledo, he was part of Closing the Achievement Gap, an initiative in which he taught male students with a history of academic challenges to promote graduation within four years. However, their racial demographics were much less diverse than Shaker’s, an attractive aspect to him.

“I think I thrive in an environment when it is not a homogeneous population,” Moorehead said.

Despite the school’s diverse student population, Moorehead wants to be someone that all students are comfortable talking to by minimizing scolding and maximizing conversation. He, too, had academic difficulties in his adolescence and “was in and out of trouble a lot,” he said.

“He’s an understanding person. He can relate to you in some ways,” said junior Jaylan Allen, a student who has talked with Moorehead.

Sophomore Ahmand Infante, another student who has spoken with Moorehead often, agreed. “He’s amazing,” he said. “He would do anything to make sure any student around here is OK.”

“It has always been a passion of mine to be able to give back to young people who may be dealing with challenges and struggles similar to the ones that I had,” said Moorehead, “and help them try to avoid the pitfalls that I fell victim to.”

This story is the latest entry in Spotlight’s ongoing “Meet the Newbies” series.