Getting to know the new interim principal’s diverse background in and out of Shaker, along with his ideas for this current school year 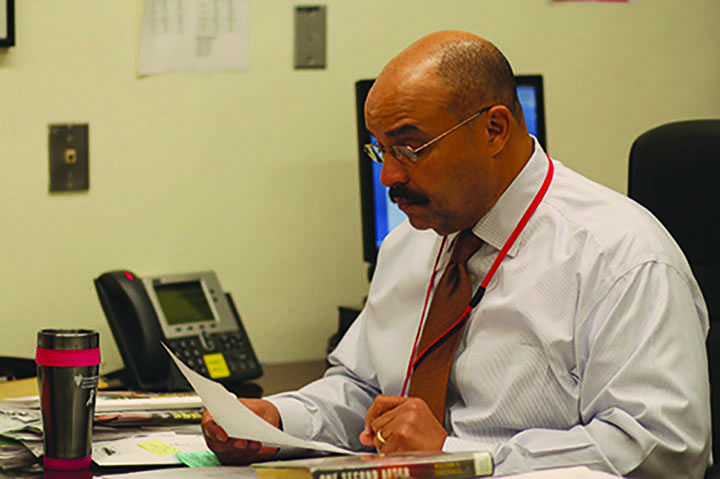 Reed closely studies papers at his desk, while simultaneously looking for a student to speak with him regarding the tardy policy.

Principal James Reed III is no stranger to these halls.

“My parents moved here in 1960,” Reed said. “There were only two black families on my block.”

“I retired on the 30th of June this year,” Reed said. He did not plan on coming to work at Shaker. However, two weeks before his retirement went into effect, he got a call from Shaker.

Reed has lived in Shaker since he was young. He and his family came before the community was very diverse.

His parents grew up in the racially segregated Birmingham, Alabama. When they moved to Shaker in the 1960s, integration was not an accepted norm.

“My life in Shaker has been an exposure to different races, different religion and living together in one community.”

As an adult, however, Reed was not always a Shaker resident. He has also lived in University Heights and Lakewood.

“I moved back to my parents’ house after my third child was born, because my mother died and my father needed care,” Reed said.

Like him, all four of Reed’s children grew up in and graduated from Shaker. The youngest graduated in ‘14 and now attends Yale University.

Reed believes Shaker is a very important place for kids to grow up and experience people of all different backgrounds.

“You don’t understand how important Shaker is until you go somewhere else,” Reed said.

Before being hired as the interim principal, Reed got the opportunity to talk to teachers, students and parents. During that time, he told them a story of an individual who didn’t understand his biracial family.

While helping his youngest son move into his dorm, Reed met the parents of his son’s roommates. However, a parent from California didn’t understand Reed’s relation to his lighter-skinned son. Reed believes that someone from Shaker would have understood familial diversity.

“Diversity is something that either makes people uncomfortable, or they don’t understand it,” Reed said. “I think I bring an understanding of diversity and a respect for diversity.”

Agricultural and Mechanical University before transferring to Eastern Michigan University, where he received a Bachelor of Arts in sociology with minors in political science and psychology. Reed then proceeded to earn a master’s in administration at Cleveland State University and receive an education certification.

Reed began as a substitute and student teacher at a middle school in Cleveland Heights-University Heights (CHUH), for social studies classes. Reed also helped to form schools at CHUH based on institutional methods and programs.

These programs became known as “small schools,” which are unit schools that allow students to narrow their scope of study.

He continued working in CHUH as the administrative  principal before becoming a principal for one of the  small schools.

“It was a group of us that started the small school communities,” Reed said. These schools focused on using Socratic seminars.

Reed understands that every student and parent in Shaker expects excellence and success.

“Every kid here starts off thinking that they should end up at some wonderfully selective university,” Reed said.

Reed believes that this is what helps Shaker stand out from other schools. It also helps students become successful.

In addition, Reed worked at the Urban League of Greater Cleveland, a nonprofit organization that helped families moving from the south get settled in cities.

“I think I’m probably talking to someone that will end up being president, or a doctor, someone who may cure cancer, or clean the oceans,” Reed said of his conversations with Shaker students.

However, Reed isn’t all about school.

Outside the office, he would love to go skydiving. He also used to play baseball.

In addition, Reed expressed his love for travelling. “A couple years ago I went to Hong Kong for four days,” Reed said. He’d love to eventually travel to Africa or somewhere in South America.

Reed is an avid reader. He also loves learning about politics and news. “I’m a news junkie,” Reed said.

As a high school student, Reed’s biggest role models were figureheads who worked to make a difference.

“I was [in Shaker] during a time of Martin Luther King Jr. and Robert Kennedy,” Reed said. He hopes to become a role model himself for students.

Reed often tells the story of a conversation between him and a counselor almost 45 years ago.

As a student, Reed didn’t always show his full potential to his teachers.

“I thought that I was under the radar and was just one of the 2,000 students,” Reed said.

However, a counselor approached Reed and asked him to take the National Merit test.

“You don’t always show us your full potential with a respect to grades, but your tests indicate that you are very intelligent,” the counselor said.

That short conversation showed Reed that someone wanted him to succeed. This has inspired Reed to do this with his own students, and make sure that they know their worth.

“People have unlimited potential, even if they don’t see it,” Reed said.

English teacher Cathleen Lawlor believes that Reed has helped to establish a new tone in the school, especially regarding the new tardy policy.

“I know many of the students, especially the seniors, are not happy about the tardy policy, but it has done wonders as far as creating a new, stress-reduced, focused and academic tone in our hallways,” Lawlor said.

Lawlor would not be surprised if this helped benefit the academic success of this school year.

“He is from the community, and I think this gives him a bit more credibility and clout with regards to effectively running the school,” Lawlor said.

English teacher Molly Miles is welcoming to the change that comes with a new principal.

“I applaud Mr. Reed for stepping into the role as head principal for Shaker Heights High School and am thankful for the positive changes the school has seen this year,” Miles said.

Miles agrees that the tardy policy has been received warmly by faculty and hopes it remains positive.

Both Lawlor and Miles noted the visibility of Reed, who frequently visits classrooms throughout the school.

“I think that Mr. Reed is genuinely interested in being engaged in the goings-on of the school,” Lawlor said.

Although Reed is an interim principal, he may spend more than one year at Shaker.

“We’ll see what they think and what I think, and go from there,” Reed said.

“Everyone’s been very, very nice up to this point and made me feel very welcome,” Reed said.