Moving From Malignancy to Benevolence 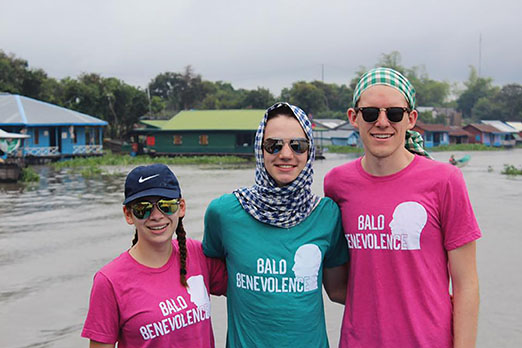 That day in the airport one year ago, she was wearing a wig to hide the hair loss she was experiencing because of chemotherapy. “It was a bad day,” said Gus, “and they were just being so rude to her.”

So, she did something about it.

“She goes into the bathroom, takes her wig off, and she’s bald,” Gus said. “And then, people treat her like a queen.”

Martha Mahoney died from metastatic breast cancer Feb. 12. But not before she founded Bald Benevolence, a foundation that raises money for breast cancer research, to encourage people to treat others with the same kindness they would a bald woman. “Everyone has something that’s wrong — their piece of baggage that they’re carrying — but not everyone’s baggage is as visual and obvious as having a bald head,” Gus said.

Gus’s mother was diagnosed with breast cancer eight years ago, the last three of which she battled metastatic breast cancer, which spread beyond her breasts to her other organs. Since she passed, her son Gus, a senior, has inherited her role as head of the Bald Benevolence Foundation.
According to the Bald Benevolence Facebook page, their cause is described as “a kindness movement, challenging people to extend extra compassion to everyone you meet.”

Bald Benevolence directs its efforts to a different charity every two to three months. Each charity, however, funds metastatic breast cancer research.
METAVivor was the first charity for which Bald Benevolence raised money. “I really like METAVivor because all donations go toward research and resources for metastatic breast cancer,” said Gus, who explained that his family was fortunate to have financial resources throughout his mother’s illness. “But a lot of people don’t. That’s the true horror of our time; the idea that not everyone has the resources to pay for something that they can’t control.”

Until June 1, donations to Bald Benevolence will benefit Twisted Pink, a non-profit foundation that supports and funds metastatic breast cancer research.
Despite fundraising playing a central role in the Bald Benevolence movement, Gus stresses the greater purpose of the foundation. “The whole point of Bald Benevolence is really to show how one person’s light can affect a whole world, and how we really dwell on the idea of our own ego and negativity,” Gus said. “But everyone around us has some sort of baggage on their back.”

Gus explained his mother’s hopes for their foundation. “She was like, ‘I want Bald Benevolence to happen. This is something that I’m really passionate about,’” he said.

He also said that his mother invested herself into not only her family, but also the community. “At her funeral, I think we had something like 1,400 people come,” Gus said. “She affected so many people that she knew. She was literally the most radiant, kind, beautiful human being I’ve ever had the opportunity to know.”

Senior Mimi Ricanati, Gus’s close friend, finds his dedication to the foundation amazing. “He has many ideas for different projects and arenas the organization can lead into, and he’s done an amazing job at staying true to Martha’s vision,” she said.

Over the next couple of years, Gus will organize various events to raise money and awareness for Bald Benevolence, including two benefit concerts in May. The first concert is on May 24 at Nighttown and the second will be held on June 10. More information can be found on the Bald Benevolence website. Gus plans to bring more events to wherever he attends college.

Ricanati noted the loving energy in the Mahoney family. “Observing the Mahoney family and seeing their special bond has been hugely inspiring, and their values are ones that I do my best to incorporate into my own life,” she said.

Gus provided suggestions for contributing to the foundation without donating money. “Start by listening to each other,” he said.

“The moment you listen to those around you is the moment your eyes begin to open. My friends know that sometimes I’ll literally just send texts and be like, ‘Hey! I love you,’” Gus said. “Don’t wait until something bad happens to tell someone that you love them.”

Gus noted that people’s tendency to care only about a cause after a tragedy occurs was visible through Bald Benevolence.

“I’m really thankful for all the donations to Bald Benevolence, but our donations obviously spiked after my mom died. People now want to donate,” he said.
“You have to actively make the effort to be kinder than necessary, and in the end, the only thing that’ll matter will be the love that you receive.”