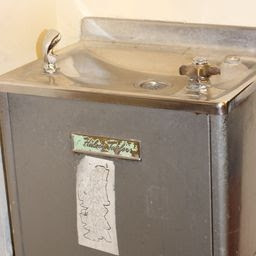 The water fountain in the main office is spending its last days in the high school. “It broke about two weeks ago,” office secretary Mae Morrical said.

Because of its water’s superior pressure, temperature and freshness, the fountain was many students’ — and adults’ — favorite in the school. According to maintenance mechanic Tom Vanderpool, the thermostat broke and froze.

According to Morrical, Vanderpool “tried to fix it, but declared it dead.”

“It was very good, cold water,” Spanish teacher Melissa Albrecht said. “If it is broken, I would like a new one.”

According to Vanderpool, a new water fountain is being ordered from the school district’s warehouse on Lee Road.

“They are going to try and get one with a water bottle attachment,” Morrical explained. “Mr. Vanderpool will make sure it is super cold.”

However, some don’t want to see the old fountain go. “It’s my favorite water fountain,” sophomore Ava Gerami said. “They shouldn’t get rid of it.”