To Be Honest, Shaker 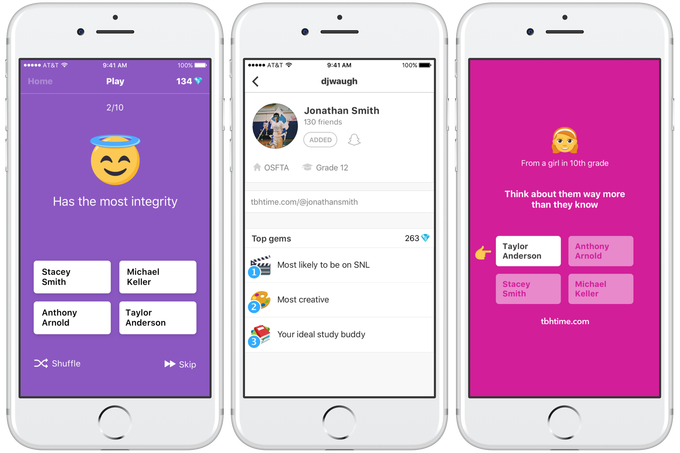 A TBH image depicts the application operating system, in which students anonymously decide on complementary superlatives for their friends.

Sophomore Naomi Smith said she checks TBH every 10 minutes during the day. “I check it so much because I want to see if anyone voted for me,” she said.

TBH, or “to be honest,” takes a different approach to anonymous applications, and it’s thriving.

The creators’ objective is to cultivate kindness and positivity by inviting people to vote on kind statements about others. TBH works like this: Users add friends from their contact list and receive friend requests. TBH then invites users to answer a series of 12 questions about four of their friends. The questions ask users which of their friends best fits the description of a flattering description, or superlative. Users must wait an hour to vote again. Users receive gems, which can be viewed by their friends, when they win a superlative.

Users can also submit a superlative to TBH, such as “would have the best life after school” or “the world wouldn’t be complete without them.” TBH then reviews those superlatives and publishes one percent of the 10,000 submissions they get a day.

Junior Kayla Young wanted to change a policy of TBH to find out who voted for her.

Students interviewed said they captured screenshots of some of the superlatives they won to send it to their friends.

Young saw the same growth. “The first day I got it, I was on it, like, the whole day,” she said.

Anytime the company receives a complaint about a question, it is removed. According to the app, TBH “believes strongly in avoiding harassment.”

TBH was released Aug. 3 in Georgia. It experienced unexpected success and soon spread to other states. It is currently available in 14 states and is first on the free Apple Store top charts. It is currently unavailable for Android devices.

However, the application is yet another distraction for students in class and while doing their homework.

Young said she checks her account about 20 times a day. She said it “definitely” distracts her from doing her homework.

Smith said the app’s polls take time from her day because they make her wonder who is voting for her. “I think everybody likes it because there are no bad questions for it,” she said.

Spring said it plays with her morale. “Although I would not like it to boost my self-esteem, it definitely can,” she said.

Still, Young said that overall the application is helpful and makes her and other students happy during their stressful days.