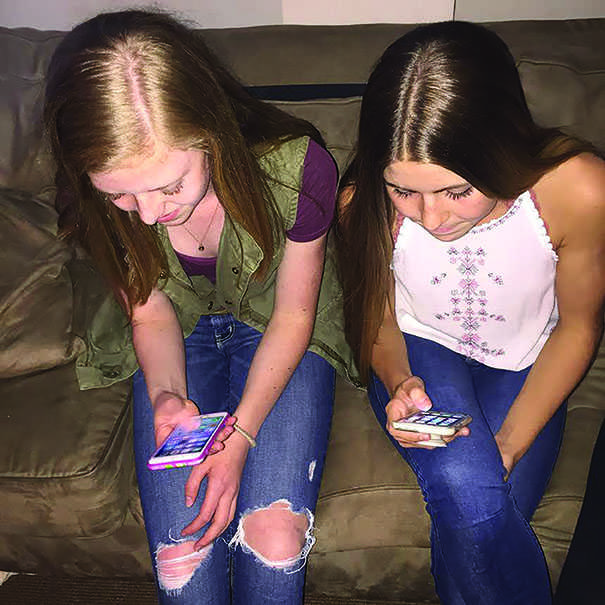 English teacher Molly Miles believes human interaction is being challenged by the use of tech nology. She said, “I think texting and communicating via social media is trumping standard face-to-face communication, and those in a relationship are missing out on the genuine connection made when a screen is not involved.” Freshman Grace Kerns said, “When some of my friends get more likes than others, the people who don’t get as many likes go and unlike those pictures.”

According to the “rules” of social media, I rate high on the scale of likes and followers. I have more than 1,200 followers on Instagram and earn about 300 to 400 likes on the photos I share.

But at what cost?

This question was a wake-up call ever since I came across a video made by Essena O’Neill, a high-profile social media user who recently decided to quit her accounts, including Instagram, because she believed they create unrealistic self-image and discontent.

“Seeing all these famous people on Instagram, their vacations and how fit they are, makes me feel insecure, because I know I will never amount to that,” freshman Grace Kerns said.

From Instagram, Twitter and Facebook to Snapchat, there are plenty of opportunities to create photo-sharing profiles. What originally was a way to share special moments in users’ lives is becoming a way of gaining validation through social recognition.

In addition to being a source of peer pressure, social media is now a competition for likes, followers and popularity.

I am a freshman at Shaker and I have had an Instagram account since I was in fifth grade. When I started posting to Instagram, I loved the idea of sharing my favorite pictures with my friends — and still do — but somewhere along the line, that lighthearted activity was replaced by a much more serious purpose.

Like so many social media users, I began to rely on Instagram to boost my self-esteem with likes and follows. Now, the more followers I have, the more content I feel.

Self-esteem from social media comes from outside perception not a genuine understanding of who someone is on the inside. This lack of internal acceptance can cause more insecurities than boosts in self-esteem.

“Self-esteem is critical to adolescent well-being. It has to be authentic, however. Just telling someone they are great is not enough. Students need to face challenges and obstacles and know that they can overcome them,” said Hallie Godshall, Dean of Students at Hathaway Brown School.

I found myself deleting pictures if they did not tally a certain amount of likes. Leaving them up made me feel inadequate. I constantly refreshed my notification page, hoping to sustain a “like ratio,” number of likes per minute. This addiction distracted me from my school work and my face-to-face interactions.

“I always look to see who gets the most likes,” Kerns said. She said this competition created tension with her friend group, “When some of my friends get more likes than others, the people who don’t get as many likes go and unlike those pictures.”

This contest for likes is becoming extreme. I receive at least one text a week practically begging me to like someone’s photo. I’m no exception. I also feel insecure about photos I have posted. These texts are not exclusively asking for a “like.” I also receive messages asking for advice about photo captions, or which filter would earn the most likes.

Time spent with friends and family is now being hijacked by time spent on screens. “I see it every day at lunch. We all just sit around the table on our phones, not interacting with each other,” sophomore Chad Hamilton said.

Relationships were not always like this. Kids used to be more personally involved with one another, creating relationships based on trust and common interests. Nowadays, relationships are defined by how many people view an uploaded image or tweet.

Dr. John Hertzer, Shaker parent and Childhood and Adolescent Psychiatrist at University Hospitals said the social media habit can be unhealthy, “For many teens, social media brings a need to constantly feel connected, which can jeopardize healthy attachments with others, interfere with normal sleep patterns and compromise other positive activities,” he said.

Social media plays a big role in my life and always will. However, O’Neill’s actions and the reporting and reflection I have done have made me consider how much time and thought I put into my social media image. I encourage others to do the same.