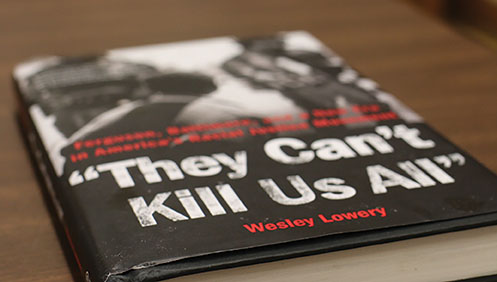 Race relations in America have never been, ironically, black and white.

Systemic oppression of black Americans throughout American history has resulted in fluctuating waves of outrage (think: the Civil War, or the Civil Rights Movement of the 1960s). Unfortunately, racial justice movements are so scattered along our nation’s timeline that most U.S. history textbooks offer only a cluster of paragraphs regarding the most significant successes for black American activists; they dip a toe into the pool, test the waters, but their page limit and general fear of the Texas Board of Education prohibits them from diving into the details.

Wesley Lowery, however, has taken the plunge.

“They Can’t Kill Us All” is Lowery’s attempt to document America’s newest wave of the racial justice movement, from Ferguson to Charleston and back again. It is anything but an easy task, especially considering how significantly social media and trending hashtags have and continue to shape it. Luckily, Lowery is exactly the man for the task.

Lowery (`08), who was Shakerite editor in chief as a senior, is a famously bold and hungry reporter, currently employed at the Washington Post. He is known for chasing after stories, literally and figuratively. As a Boston Globe reporter fresh out of Ohio University, he tweeted from outside the 2013 Boston Marathon bombers’ apartment, and he and a partner followed law enforcement officers as they hunted the Tsarnaev brothers. He also camped out in a Boston-area funeral home and reported on the owner’s decision to accept the body of the deceased Tsarnaev brother. His efforts, along with those of his Globe colleagues, earned a Pulitzer Prize for breaking news coverage. No other story he covered after that bombing would require such urgent, live coverage until he was sent to Ferguson, Missouri in August, 2014, after a police officer shot and killed Michael Brown.

Brown’s death sparked a flame, quickly spreading nationwide and drawing attention to police treatment of black Americans. Each of the five main sections of “They Can’t Kill Us All” highlights a significant moment in this rapidly expanding wave of America’s racial justice movement. The narrative begins where today’s racial justice movement’s spark caught fire: Ferguson, Missouri.

Brown’s body lay on the Ferguson pavement for 4.5 hours after officer Darren Wilson shot and killed the unarmed 18 year old on Aug. 9, 2014. The city mourned with confusion, frustration and pain. Why did this officer, sworn to protect him, fire 12 rounds at an unarmed teenager? The jury’s later decision against indicting officer Wilson was met with public resistance via protests, both peaceful and extreme. As police responded with tear gas and riot gear, rogue protesters escalated the chanting and marching by setting a QuikTrip gas station ablaze.

By then, journalists — including Lowery — had flocked to Ferguson. Lowery would be one of the first reporters arrested for seemingly no reason at a McDonald’s near the crime scene. After hours in a cell, he was released to continue reporting the protests, emotions and facts unfolding in Ferguson.

Ferguson was the first of many stops over the next few years. In each chapter, Lowery focuses on another city where African-American citizens died at the hands of police or, in the case of Charleston, S.C, a white male who murdered church congregants in hopes of starting a race war. Lowery provides facts, insight, interviews, personal testimony and experience that no history textbook or compilation of news articles could fully deliver.

Lowery even draws parallels between the slain black men whose stories he researched and himself, a biracial reporter who was a SGORR leader at Shaker. When he returns to Cleveland to cover Tamir Rice’s death and the city’s response, he reflects on his unique connection with his stories. For instance, he notes how frequently he’d roamed the unfamiliar suburbs around Shaker Heights during his teenage years, often wearing a hoodie and baggy jeans, his appearance strikingly similar to that of Trayvon Martin. “How many times was I one overzealous neighborhood watchman away from death?” Lowery writes. His reflections on shared identity but different fates drives an incomparably compelling story.

Understandably, such an ambitious book is not without flaws. Connecting the number of people, places, incidents, tweets, hashtags, jurisdictions, facts, opinions and years of reporting is anything but an easy task. Lowery manages to pack it all in one publication, but the writing is occasionally verbose and exhaustingly descriptive.

However, the pros generously outweigh the cons. Lowery is honest and personal when it’s appropriate, and professionally detached where the facts are the priority. Overall, “They Can’t Kill Us All” is an impressive blend of storytelling and journalism, a must-read for anyone devoted to, interested in, or remotely following the racial justice movement in the United States. No other resource offers such a complete and comprehensive account of today’s movement. As Lowery wrote, “The story of Ferguson remains the story of America.”

If this is assertion is true, then I’m certainly glad Wesley Lowery is the one telling the story.