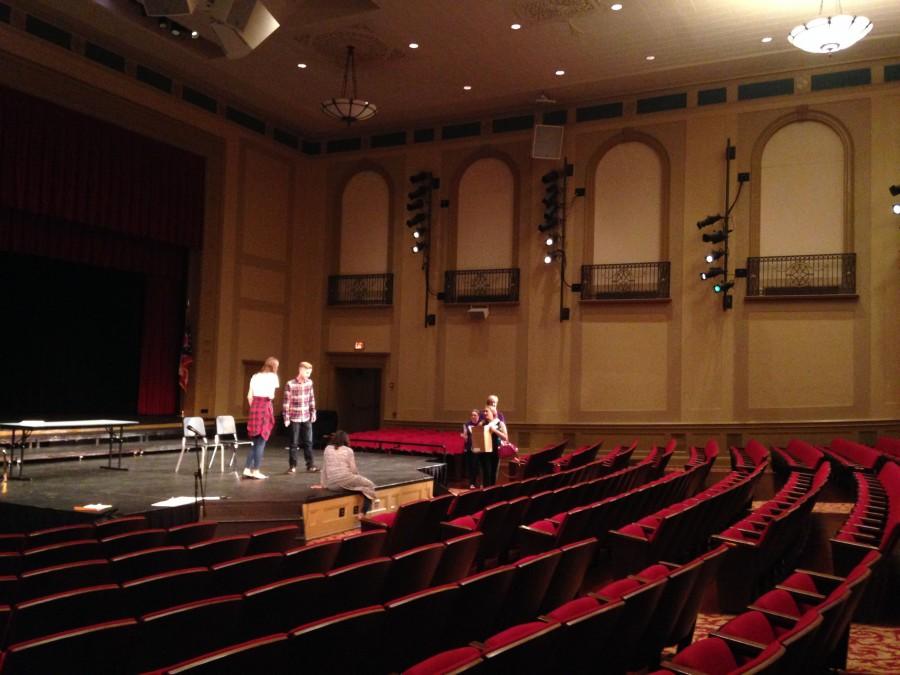 Members of Know Abuse rehearse a scene before the performance Sept. 10.

To help Shaker freshmen know abuse, today’s dating violence assembly will be more intense, raw and up to date.

The original play, performed for freshmen annually by members of Know Abuse, a branch of the Jewish Family Services Association that helps to spread awareness of dating violence through performance. While impactful, the play was out of date, according to Leah Weiss-Caruso, director of the Know Abuse program.

“We believe that prevention education is the best way to stop the cycle of abuse,” said Weiss-Caruso. “I think it makes potential scenarios real.”

Weiss-Caruso went on to explain that the transformed play will exemplify a more modern approach to raising awareness. “I think the new play is content for the 21st century,” she said.

Hadas Marcus is a junior performing in the play. “I do think the new version of the show will be a lot heavier than the previous,” said Marcus. “This show has no laughing moments, and it can’t be taken as a joke.”

Isabella Iljasic, junior and member of Know Abuse, believes that overall, the organization is effective in spreading the message. “It’s much more memorable than just reading an article about abuse or watching a cheesy, melodramatic after-school special from the 90’s in your health class,” Iljasic said.

During the revision of the script, Know Abuse hired Becca Ress as the new theater director. “This script hits home for all teens in a way our old script did not. The statistics are very scary. I think this new script will put the audience in the right frame of mind to consider what those statistics really mean and specifically what they mean for them and their friends,” Ress, a science teacher at University School, wrote in an email interview.

“I hope that kids understand that teen dating violence can happen to anyone,” said Know Abuse Advisory Panel member Hadas Galili, a freshman at Laurel School. “I also hope that this play sheds light on the fact that domestic abuse is much more common and widespread than we tend to think.”

After the second-period performance, the Know Abuse Advisory Panel will meet with groups of freshmen to discuss the play. Rather than having adult staff lead the discussions, they decided a group of teenage Know Abuse members would be easier for freshmen to talk to.

“If the audience has to take away any few things from this,” said Marcus, “it would be that abuse has no archetype, and that [teenagers] have the right for healthy relationships, the right to respect and autonomy is universal, and how to recognize when you’re not being treated properly.”