Izzy Ortman to the Rescue 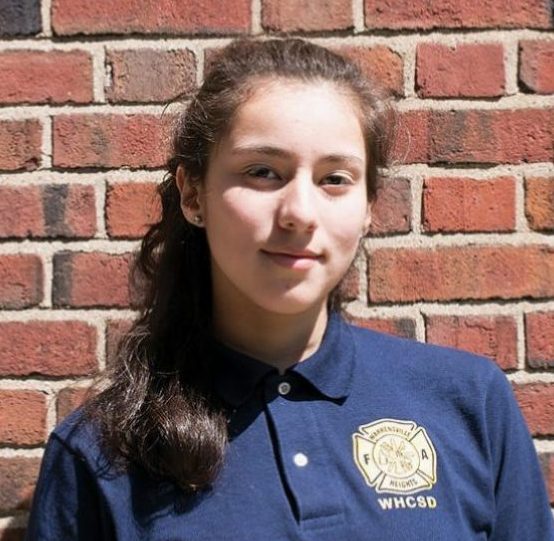 High school juniors are typically preoccupied by questions about where and how they will find themselves after graduation.

Izzy Ortman, however, is not an average high school junior — she has everything planned out. At 17 years old, Izzy is studying to become a firefighter at Tri Heights Fire Tech at Warrensville Heights High School.

It provides students 60 credit hours toward an associates degree, emergency medical training and a firefighter license and certification — all before the students cross the stage at their high school graduations.

Izzy attends firefighting school every weekday, along with about 15 other students, five of whom are female.

She is the only Shaker student in the program and has earned all of the credits required to graduate from Shaker Heights High School.

This is Izzy’s first year at Shaker; she previously attended Lawrence School and Agnon School.

While she enjoyed the smaller classes at her previous schools, she transferred to Shaker in pursuit of new experiences. “I wanted to get to know new people and make new friends,” she said.

According to her father, Brad Ortman, Izzy fell in love with firefighting after attending a summer camp for public safety last summer.

“She first wanted to be an emergency medical technician, but now decided she wants to be a firefighter. Perhaps she may gravitate to another similar occupation that is less physically demanding, such as nursing, at some point in the future,” he said.

On Mondays, Wednesdays and Fridays, the firefighting students have academic days, during which they complete reading assignments and take notes. Their homework takes approximately two hours to complete.

Tuesdays and Thursdays are physical training days, during which students perform aerobic activities such as running around a track or to a local fire station. “One day, we climbed a ladder on top of a fire truck that was about 100 feet in the air,” Izzy said. “During winter, we will sometimes run outside, but mostly in the recreation center, and we sometimes carry oxygen tanks on our backs and run up and down the stairs a couple times.”

In one strengthening drill, the students carry a 200-pound dummy from one side of the school parking lot to the other.

The dummy was nicknamed “Dirty Dan” by last year’s seniors because of its dirt and grime.

Izzy’s father believes she was destined to go into emergency services and said she has more experience than most 17 year olds.

“A woman in a car in front of our house had just suffered an aneurysm,” he stated in an email. “Blood was coming out of her nose, and she was laying on the horn of her car. Isabel noticed the commotion, and she immediately called 911. An ambulance came and rushed this woman to a hospital.”

“Days later, when she had recovered, she came back to the house to thank Isabel for saving her life,” he added.

Firefighting training is not Izzy’s only forte; she is also a member of the crew team and admired by her teammates. “I kind of feel like a role model, in a way, because they look up to me about what I’m doing. It’s just a great feeling,” she said.

Freshman Aine Jameson, one of Izzy’s teammates, shares this admiration.

“She is very energetic, and there is this great energy being around her. If I tried to describe every attribute of her, we would be here for a while,” Jameson said. “I think if anyone were to [be a firefighter], it would be Izzy. She’s got the right mindset for it and she’s really good at working in teams.”

Antoine Crews, who has been an instructor at the program since 2006, sees leadership skills in Izzy.

“She has taken on hard tasks, group leading, and has kept up with her personal training. The main thing we look for in our students is teamwork, and Izzy is a great example of that,” Crews said.

Izzy’s father said her energy and personality amount to “a force of nature” and that she has a “tremendous sense of humor.”

He wrote, “She can always make me laugh, and I know she is the same way with her friends, too. She’s a pretty laid-back kid who trusts her inner instincts.”

Despite her commitment to a life-saving career, Izzy maintains that sense of humor. “Everywhere I’ve gone, I’ve always been known as the class clown,” she said.

As a female, Izzy also faces the challenge of being underrepresented in her field.

According to the U.S. Bureau of Labor Statistics, there were 252,000 people employed in firefighting occupations in the United States in 2016. Only 4.1 percent of them were women — a significant improvement upon the 0.1 percent figure in 1984.

There is historical precedent for female firefighters, however. During World War II, women served as firefighters in the United States to replace male firefighters who joined the military; in fact, during part of the war, two fire departments in Illinois were all-female.

In 1942, the first all-female forest firefighting crew in California was created.
Employed by the California Department of Forestry, the crew comprised a foreman, a truck driver, an assistant driver, firefighters and a cook.

Despite being outnumbered by them, Izzy said her male colleagues are supportive, “The boys are really nice and are always encouraging us girls to step up to the plate. All the firefighting students are close. We are all a huge family.”

Crews is confident that Izzy will earn her EMT certification next year and go right into the field.

He said, “I think she will do well, and if she continues to work hard, she will get her certification, and it won’t take long for her to get hired.”