Students groan about lack of sleep, but planning, grading assignments, assessments keep teachers up, too 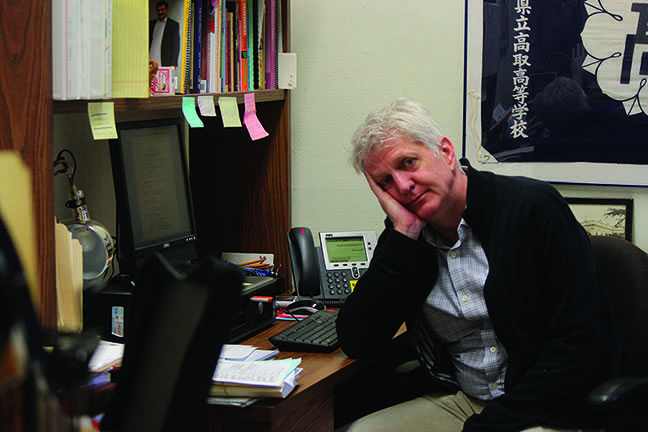 Students often remark that teachers are ignorant about the amount of sleep students get, but they rarely spend time thinking about teachers’ sleeping patterns.

Social studies teacher Tim Mitchell said he gets up at 6:30 a.m. every day and still manages to get an adequate amount of sleep.

“I’m out dancing most nights of the week,” Mitchell joked. “I put a lot of hours into the job. I do spend chunks of time grading in the evening.

“If I have to do intense grading, like if I have to grade essays or written work, I’m much better off doing that grading earlier in the day than I am late at night, or weekends,” he said.

As a teacher, he gets about the same amount of sleep as he got when he was a high school student.

He said he tries to help and prepare students so they don’t get too stressed out in his IB or AP courses.

“When we came back, after semester one, I gave my students a reading calendar that takes them all the way into March. I kind of trust that my students will know how to manage their time based on their schedule. I have a sense that the work for AP U.S. History should take about an hour a day on average, but that when you find that hour can be challenging,” he said.

“It might not be the night before; it might be over a series of days before based on the other assignments you have to take care of.

“I am actually pretty conscious of how busy my students’ schedule is, so by giving them lots of time to figure out when to do these things, I think, makes it manageable,” Mitchell said.
Financial Algebra teacher Eric Babcock said that he gets exactly six hours of sleep a night, which varies from the four hours of sleep he managed to get nightly when he was in high school.

“I usually spend a little bit of 5/6 period grading and an hour at home. Unless we had a quiz, in which case I spend a large chunk of time grading at home,” Babcock said.

He also said grading student work does not affect his sleeping patterns, and he would get the same amount of sleep whether he assigns work or not.

“Grading just affects me doing things I would rather be doing sometimes,” he said.

Babcock said he spends six hours grading each test he gives — approximately 45 minutes for each of his five classes.

Mitchell said he doesn’t find it helpful if teachers don’t clearly express to their students when all their upcoming assignment will be due.

“I hear there are teachers who say, ‘oh, for tomorrow, you need to do this.’ And I think, like, you’ve got to be kidding me; what if that person has a dance class that night? What if that person’s on the crew team and has practice until 8 o’clock? And you just now told them this is due the next day.

“Or those people who wait even until the same week and announce a larger assignment that is due some point later in that week,” he said.

“I think our test dates and our assignment dates should be set out long in advance, so people have a chance to have a more civil life,” Mitchell said.
Sophomore Eunice Min gets even less sleep, ranging from only three to five hours per school night. “Homework takes me about seven hours. I take double languages and two Advanced Placement classes,” she said.

She tries to prioritize getting her homework done over getting the right amount of sleep.

“I don’t even have a cutoff time because I really want to get all my work done, which teachers emphasize. They say you don’t need to get good grades and just understand the information more, but in real life it’s all about grades,” Min said.

She never considered how much sleep her teachers get. “There are many factors in what determines how much sleep a person gets — whether they are actively busy, or they procrastinate,” she added.

“Judging if teachers get less or more sleep than students all depends on exactly what they do throughout the day,” Min said.

“I sleep about two hours less a night in the school year than I do in the summer. Quiz and test grading are a large part of this, but planning lessons is also time consuming,” Rathbone said.

Quizzes take him anywhere from two to three hours of grading, whereas assessing tests ranges from six to eight hours. He usuall completes both at night.

Junior Edie Duncan also said she doesn’t think about how much teachers sleep.

“I don’t really know what kind of sleep my teachers get. I know they have to grade papers, but I can’t imagine they get much less sleep than I do,” Duncan said.

She believes that reducing busy work would benefit both students and teachers.

According to an article published at Fractus Learning, four hours of sleep per night during a school week impairs someone as much as being awake for 24 hours.This level of impairment rivals the effects of being legally drunk.

“Not only does this greatly lengthen reaction time, impede judgment, and interfere with problem solving . . . it is no state to be teaching or learning in,” the article stated.
World history teacher Kyle Fleming said that he gets just more than five hours of sleep a night.

While students devote hours to completing writing assignments, teachers must spend significant time assessing them. “I have to spend a lot of time to read and be thoughtful,” Mitchell said.

After recently administering a Document Based Question test recently in his APUSH class, Mitchell stated, “I’m probably looking at eight hours of time to be able to read through two classes of DBQs and mark them.”

“There’s a lot that happens behind the curtains that teachers are involved in, that students are probably not as aware of,” Mitchell said. “And this makes the job really demanding.”

Other teachers find that they spend more time planning their lessons than assessing homework and tests.

Intervention specialist Kady Cole strives to get to bed early.

Although teachers devote hours to working at home, Cole believes that it’s helpful to remain positive toward her students, even after getting little sleep.