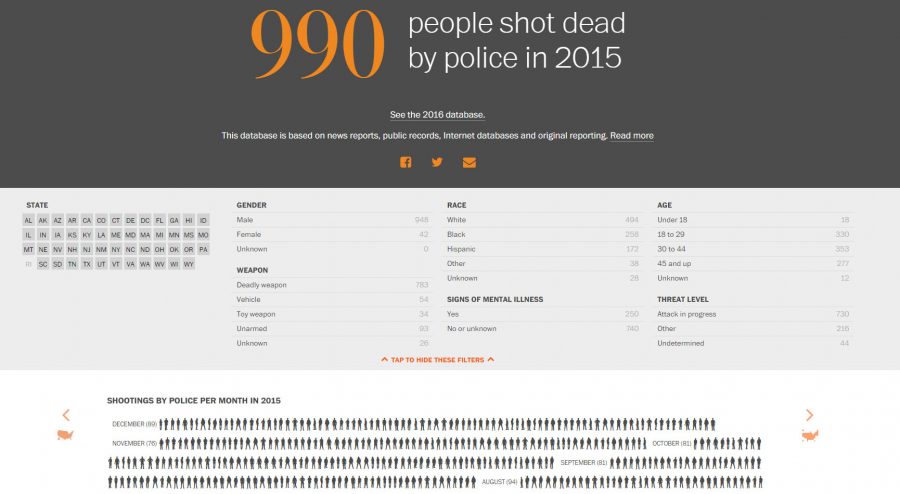 The database that Lowery and The Washington Post created to display the number of people shot by police.

Thirteen journalists were awarded Pulitzer prizes this year. Two of them were former Shakerite editors.

The Pulitzer Prize is an award given each year to American musicians, journalists and writers for outstanding achievement. It is one of the highest a journalist can earn.

Kathryn Schulz (‘92) and Wesley Lowery (‘08) studied journalism and worked for The Shakerite while in high school. Schulz was a graphics editor, and Lowery became editor in chief as a senior. Schulz, who won a Pulitzer in the feature writing category, has written three books and works for The New Yorker magazine. Lowery, who shares the Pulitzer for national reporting with colleagues, covers law enforcement, justice, race and politics for the Washington Post.

Lowery, 25, is credited with inspiring a year-long Post investigation of fatal police shootings during 2015. The Post found that no federal agency maintains national statistics about such shootings. The Post compiled the statistics and analyzed them to create graphs, charts and visuals that illustrate the details of each shooting as well as reporting the stories of individual shooting deaths and their effects on families. The director of the Federal Bureau of Investigation has since announced that the agency will begin keeping statistics about fatal police shootings.

The database shows 352 as the number of deaths in 2016 so far, and also included a visual representation of it. There’s an array of 352 rectangles, each representing a single person. When one is clicked, information about that person’s death is shown.

According to the database, 990 deaths occurred due to police shootings in 2015 and the line graph displays the increasing number of fatalities in 2016 in comparison to 2015.

The award is Lowery’s second Pulitzer. Before joining the Post, he reported for the Boston Globe and contributed to its coverage of the 2013 Boston Marathon bombing, which earned a Pulitzer Prize for breaking news coverage.

“We were newspaper readers; there was always a newspaper in the house — one, maybe two or three,” Lowery’s mother, Sheila Lowery, said. “He would go into his dad’s office all the time and see how newspapers were run and produced. It was always around, so he was very exposed to it and once he got into it there was no stopping him.”

Schulz won the prize for her in-depth New Yorker story, “The Really Big One,” about the Cascadia subduction zone which runs along the coast of the Pacific Northwest and the damage it will cause

to the area when it produces a powerful earthquake and a super-tsunami.

In subduction zones, continental and oceanic tectonic plates meet and, over thousands of years, one slides underneath the other into the earth, periodically causing earthquakes and tsunamis.

Schulz wrote that, eventually, the pressure that has been building up at the Cascadia subduction zone will finally force it to slip, causing a magnitude-9.2 scale earthquake. Her story includes instructions for readers to illustrate the slip and ensuring disaster with their hands. One journalism expert stated that Schulz “may have written the finest analogy in the history of journalism.”

Within 15 minutes of the beginning of the earthquake, a super-tsunami will descend over the West Coast, destroying buildings, forests and all human civilization in the area. The tsunami is predicted to take out everything west of Seattle, Washington, which is about 65 miles inland, and could hit anywhere between Northern California to Vancouver Island.

Her journalism teacher, Sally Schwartz, who is now retired, was impressed. “I was amazed at her story that won the Pulitzer. It caused quite a stir when it first came out,” she said. “Not only is she a great writer, but her research is as good. I was also so impressed with how she took a complicated subject and made it so clear. I now understand earthquakes in an entirely new way.”