Forging a New Life Across the Globe

Born in a refugee camp, Brush student Goma Nepal is thriving in the U.S. 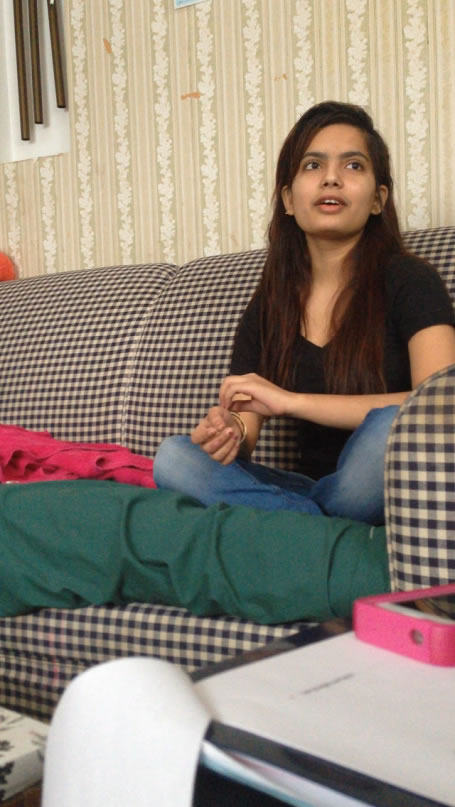 Goma Nepal is currently a senior at Brush High School. She regularly attends English as a second language classes and noticed that American students are more likely to help each other than students at her old school in Nepal.

Imagine being thrust into a completely new country, an entirely new culture, about which you know nothing.

Imagine having to suddenly call this foreign place home — even though you are mystified by the language, the social customs, the schools, the food and just about everything else. Far from family and friends, you’d have no choice but to begin to try and assimilate. How would you handle this sudden immersion?

This is the story of Brush High School senior Goma Nepal, a Bhutanese refugee.

Goma, who arrived four years ago,  is one of approximately 4,500 Bhutanese refugees who have settled in the Cleveland area since 2000, and their progress has caught the attention of many, from local volunteers to The Plain Dealer. Last May, the newspaper trumpeted the success of the refugees in Cuyahoga County. According to a study, 75 percent of the county’s refugees over the age 16 are employed; that’s far better than the population at large. And most refugee families have more than one wage earner contributing to the welfare of their extended families. In fact, in 2012 refugees contributed more than $45 million to our regional economy. In this respect, Goma’s assimilation into American culture is one to be rivalled.

Yet her life is not without struggles. Though a fairly small person — standing just under five feet tall — Goma has always had big aspirations for herself since arriving in the United States. Unlike many people her own age, Goma has kept two jobs for the past two years and is astonishingly independent given her circumstances. She pays her family’s utility bills, contributes toward household expenses, and pays for school extras, such as her graduation cap and gown. She’s grateful for everything she has, from her opportunity to go to high school to the driver’s license which makes it possible for her to get to her night job at McDonald’s — things most suburban high school students have long since forgotten to appreciate.

To understand Goma’s story, first it is necessary to look back. Though she was born in Nepal, Goma’s family is actually from the neighboring country, Bhutan. Goma and her family are among more than 100,000 refugees forcibly kicked out of Bhutan in a wave of ethnic cleansing. Despite the fact that many people of Nepalese descent called Bhutan home for generations, the then-King of Bhutan decreed in the 1980s that the country needed to subscribe to a policy of ethnic purity, beginning with the majority Buddhist religion. Those who were ethnically Nepalese — a third of the population–were forced to give up their traditions, tribal languages, religion and even clothing to conform to the Bhutanese national ideal. This ethnic cleansing soon led to violence and incarceration, as these minority groups were stripped of their basic rights; in fear for their lives and safety, they fled Bhutan. Families like Goma’s who were of Nepali descent, suffered many human rights violations and eventually were exiled for decades in United Nations-run refugee camps in Nepal. The Bhutanese government still insists to this day that no harm came to the hundreds of thousands of displaced people and stands by its decision to remove them. However, the impoverished and neglected refugees tell another story.

Goma was born and raised in a Nepalese refugee camp, and has never been to Bhutan in her lifetime. She described the conditions in the camp, her birthplace, as being unimaginable compared to her new home here in the United States. “We’d have to work a whole year to buy an apple,” explained Goma. Meat and fruit were rare, and the camp, comprised mainly of plastic and bamboo homes and tents, had no running water. The homes were close together, and Goma joked that there were few secrets to be had, as neighbors easily heard one another through thin plastic and bamboo walls.

Despite these conditions, Goma was unhappy when she found out her family would be relocated to America. Leaving home for such an unfamiliar place frightened her. And for a long time after arriving in Cleveland, life was tough for Goma. “I cried every day when I got home from school,” said Goma. She missed her friends from Nepal, some of whom have been relocated to places as far-flung as South Dakota. The United States has admitted 60,773 refugees like Goma and her family from 2008 through 2012, and other countries including Canada, Norway, the United Kingdom and Australia have done the same.

Staff member Mark Rodney works for the organization U.S. Together, a non-profit agency that helps resettle refugees in Cleveland’s East Side. He agrees that the Bhutanese refugees have definitely struggled while in America, but their hardships go hand-in-hand with opportunity. “There are major challenges. The families see the children as having real opportunities, and the adults just [focus] on working and supporting the children,” Rodney said.

According to Rodney, a positive future lies in the hands of the children. Cognitively, children have an easier time learning languages and tend to assimilate more quickly into a foreign culture. “This is the reason why [adult refugees] put so much hope in the youth,” Rodney said. The educational opportunities in America are vast compared to those in their home country and children are the ones who reap the benefits provided.

Through Goma’s eyes, American culture and the high school experience can be seen in a whole new light. Goma laughed as she retold the story of her family’s first Halloween here. “The first Halloween, a kid comes up to the door and asks for a cookie . . . it made my mom so mad because she had no idea what he was doing!”

Goma sees school, too, in a radically different way than the typical American teenager. To her, high school is a privilege — a chance to work her way up in the world. Having been raised in a culture that highly values respecting adults and superiors, Goma is shocked when classmates are rebellious and estimated that in her classes, “Nine out of 10 students talk back to the teacher.”

Corporal punishment is a cultural norm in Nepal and is used almost daily, Goma said. She recalled that teachers use violence against students oftentimes for simple misdemeanors such as on a student who forgot to do his homework, or even on a girl whose braids were uneven. However, Goma said that an angry student is free to hit a teacher back as long as they are outside of the school building — with no consequences.

Understanding the extent of the culture shock Goma has been dealing with requires understanding the many traditions her family abides by. She is a part of the caste system, which divides society into  four different levels. Typically, it is frowned upon to interact with people from a different caste. Goma noted how in her culture,“higher-caste people are not allowed to date anyone from a lower caste.” Even if she loved someone in a lower caste, she wouldn’t be able to be with them.  Dating an American would also be completely out of the question. “My parents would not accept me,” she said. If Goma were ever to marry someone from a lower caste, she says she would be essentially dead to her relatives.

Despite Goma’s reservations upon first arriving in America, Cleveland has become her home. In the four years since her family left Nepal, Goma has grown to deeply appreciate the freedoms America provides. “I work, I have a car. Girls have more freedom,” she said. “I don’t have to cry to my mom to get $1. I can earn it myself.”

Shortly after Goma arrived in America, she realized a job would improve her English and provide her with much-needed independence. In addition to her job at McDonald’s, she works weekends at a kiosk in a mall. Goma jokingly recalled that the reason she got her job at Mcdonald’s without knowing any English: the manager liked her glowing smile.

For most high schoolers, a job means means money to go out to eat with friends or go shopping. For Goma, it means financial independence. Working two jobs, she contributes to her family’s rent, pays for her car insurance, contributes to gas and electric bills and buys her own books. While so much responsibility can be burdensome for teenager, in Nepal Goma would never have had the chance to work. However, at times the responsibility weighs on Goma.

Back in the refugee camp in Nepal, girls’ rights are limited. For the country as a whole, human trafficking remains problematic and many girls are victim to marriage sometimes as early as 8 years old. Goma remembered how if a man were to threaten or harm her, she would be expected to remain silent. She said that for this reason mothers rarely leave their daughters out of sight. In America, Goma feels a lot safer. “I can speak. If someone hurts me I can tell someone,” she said.

Goma’s American story is just beginning. Understandably, she has no desire to return to her roots. “I hate Bhutan,” Goma said. Bhutan never gave her citizenship, and neither did Nepal. America will be Goma’s first “home” country and she expects to take the citizenship test in a few years.