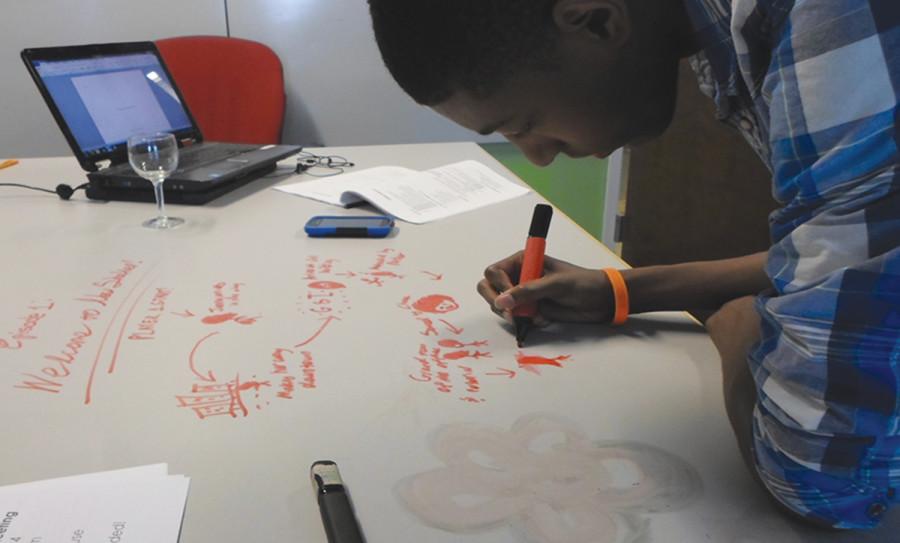 Sophomore Davionne Gooden works on the plot for a video game he is designing May 24. He does most of his work at LaunchHouse, an institute for startup businesses, like Gooden's, in Cleveland. He plans to sell his two most recent video games, "The Bravest Four" and "Office Adventures," in July, and plans to make a career in video game design.

Forget Nintendo and Microsoft: sophomore Davionne Gooden designs video games in his very own bedroom, available at no cost to you.

“I lost the Game Boy,” he said, but still “got really into video games.”

Four years ago, Gooden downloaded RPG Maker VX, the software with which he created his first video game,“Last Fantasy.”

Gooden recalled this first attempt. “It was really bad,” he said. “Everything in the game was terrible.”

However, since 2010, Gooden has released 10 games and created 50. He has his own website, zeveregames.wordpress.com, and a place in this summer’s highly selective LightHouse Entrepreneurial Accelerator Program at LaunchHouse, an organization based in Shaker Heights that fosters startup companies in Cleveland. The LaunchHouse LEAP  program is a six-week summer opportunity designed for high school entrepreneurs who want to turn their ideas into real businesses.

“The Lighthouse Entrepreneurial Accelerator Program equips some of the most talented Northeast Ohio students with the tools needed to transform a good idea into the next great small business,” said Sen. Sherrod Brown told LEAP students who gave the first public pitches of their projects August 2013.

Video games change “the way you look at life,” Gooden said. “I’ve become a lot more optimistic . . . but open to the ways of the world.”

Specifically, Gooden said “the fact that some of these themes and mischief can reach a wide audience of people and impact them” brings him joy.

He cited a game he did not create, “Bioshock Infinite,” as an example of his open-mindedness. “It dealt with . . . choices in life — in the end if they matter and if you’re the one who actually decides those choices,” he said. From this, Gooden said he learned a lot about fate and how to apply it to his own games.

“Fate, in a nutshell, is one of the things I’ve been tackling in games. My perspective on it is you have choices but . . . they’re skewed in a way. It depends on environment for if you have authority over you,” he said.

He uses PCs for his work, and said he has 10to 12 video game consoles. He releases his games by uploading them to the Internet and sharing a link on Facebook and on his website. Gooden does not charge for downloads.

He said his games are also mostly “2D top down,” which means that to the player, they appear to be on a two-dimensional plane from a bird’s eye view.

“People in school play my games . . . mostly close friends,” he said. “I might have one in Japan.”

Sophomore Kelsey Jones is a fan of Gooden’s. She does not play his games, but edits their scripts.

“Depending on when [the game] takes place, he wants to know if [the language] sounds accurate,” she said. “It can be off.”

However, Jones described Gooden, who is a  MAC Scholar,  as “neat and organized . . . he’s very talented.”

“He’s always so creatively smart,” she said. “I don’t know how he does it.”

Gooden called his games “not exactly” popular. “I don’t talk about it that, that much,” he said.

“He’s self-conscious about his games,” said Jones, “but they are enjoyable.”

This July, Gooden hopes to release two commercial role-playing games, “Office Adventures” and “The Bravest Four,” which he will market on Facebook and Reddit. Both will likely cost $14.99.

“‘The Bravest Four’ I have been working on the longest, since last summer,” said Gooden. “It’s about four college students who are trying to find out what’s inside an underground bunker.”

Screenshots of “The Bravest” Four show colorful cartoon figures interacting with magic on each level of their fantastical journey. In the end, they manage to unlock the underground temple, but learn that “some secrets should stay secret,” as Gooden states on his website.

Office Adventures “is about this group of game developers,” Gooden said. “The game is wacky adventures, and hilarity ensues.”

Gooden admitted to some apprehension about these games’ debut.

“I have no idea how well these games are going to do when they’re released,” said Gooden. “I’m really scared and I’m really stressed.”

For his most stressful times, however, Gooden turns to theater. He participates in Shaker’s Theatre Department. “Theater relaxes me,” he said, “even if it’s just temporarily.”

“I really enjoy every aspect of it — being around friends, being productive and feeling appreciated,” he said.

Gooden cited fantasy games such as “Final Fantasy” and the “Legend of Zelda” series as inspiration for his own creations. He does not prefer shooter games such as “Call of Duty,” which he said “there is too much of.”

“My games have violence, but it is fantasy cartoon violence.” he said. “Blood and gore drama don’t really appeal to me.”

However,Gooden acknowledged that “there’s a hard core market for violent games . . . ‘Call of Duty,’ that’s like a billion-dollar franchise. It’s definitely accessible for everyone to play.”

In fact, there is demand for both violent games and the kind Gooden prefers: adventure. The two most popular video game genres in 2012 were shooter and action, although “Call of Duty: Black Ops II” was top-ranked that year, according to the Entertainment Software Association.

“I like my games to have more of a story to them,” Gooden said. He draws inspiration for his games’ plots from modern fantasy novels.

“For me,” he said, “story is really important. It helps the player get immersed in the game.”

Another reason Gooden prefers fantasy games is their timelessness. He called first-person shooter games “a fad,” while “Skyrim” and “Final Fantasy,” both which have been out for many years, remain popular.

Gooden said, “I’m not sure how much of a long-term impact each [‘Call of Duty’] game would have. I’m not sure in 10 years people would be remembering them.”

On the other hand, Gooden believes fantasy games are “unique.”

“Lately there’s more indie-type games, a trend to move away from war, ‘go America’ kind of games to more unique setting and mechanics,” he said.

With any type of game, Gooden believes the most important part of making one is “pouring your heart and soul into it. I think that is one of the most crucial aspects of game design.”

Gooden hasworked on “The Bravest Four” since last summer, but some games only take three days to make. On average, he works on video games five to six hours a day, and all day on weekends. “It definitely gets in the way of schoolwork,” he said.

It’s not just Gooden who racks up time in front of a screen. A 2010 study of eight to 18-year-olds conducted by the Kaiser Family Foundation showed that children spend more than seven and a half hours a day consuming any type of media.

However, Gooden does not consider video game addiction to be a problem “unless you get really addicted to it,” he said. “I don’t know anyone like that. There are ways to overcome it, though.”

Another common stereotype surrounding video games concerns violence. Gooden also does not believe video game violence spurs real-life violence. “Video games can enhance a mental disorder,” he said. “But the disorder has to be there already.”

Freshman Noah Jalango agrees. “Video game violence, I think, is OK in small doses, because most people know that they are only playing a video game.”

Gooden finds some parts of breaking into the video game market unimpressive. “It seems the way to succeed unfortunately is just copying other games and that’s how to be successful right now,” he said.

He also believes there is “not so much of a market” for mobile phone games and would rather not design them as a career. “For the game industry as far as mobile games go, we switch from one thing to another very quickly,” he said. “A few months ago there was this whole ‘Flappy Bird’ ordeal, but now it’s like, ‘Don’t Touch the White Tiles’ or ‘2048,’ or whatever. I know in a few months a new game is going to come out.”

Whatever the outcome, Gooden will continue to design video games throughout high school.

“Basically, it boils down to this,” Gooden said. “[Video games are] a nice, safe outlet from the world that allows you to be immersed into another world. Part of this has to do with games being interactive, which is unlike any other medium. When you watch a movie, that’s it. You’re basically in a locked path. With games, there’s something different. Even with really linear games, you still have the ability to do what you want, and create your own entirely different experience from someone else. It can bring people together, whether it’s through couch co-op multiplayer, online MMO’s, eSports, sitting together with a friend, or just discussing and having fun over games. It’s a great feeling.”

“Games have been a part of my life since I was kid,” said Gooden, “and I know they’ll stay that way.”