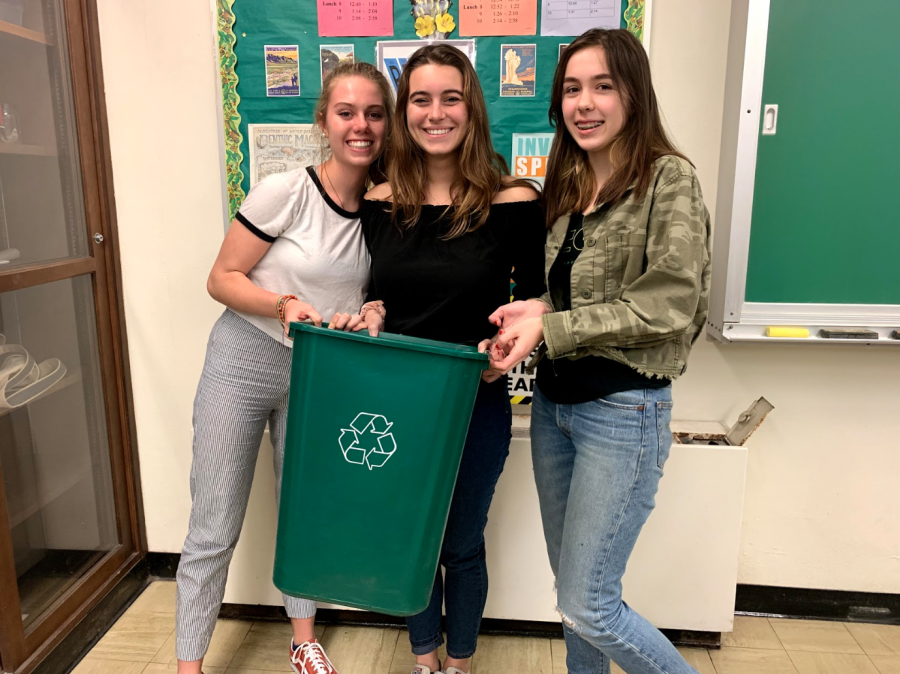 The trio organized a climate strike in Cleveland to support an international movement March 15.

Starting in August 2018, 16-year-old Swedish student Greta Thunberg sat on the steps of the Swedish Parliament building every Friday during school. Thunberg protested by herself, with hand-made posters at first, and over time, her movement gained supporters and news coverage.

In an interview with CNN, Thunberg stressed the importance of student-led strikes in affecting change. “Something big needs to happen,” she said.“People need to realize our political leaders have failed us. And we need to take action into our own hands.”

Stein had been aware of the climate crisis years before deciding to organize the strike, but did not grasp the severity of the issue until The 2018 U.N.’s Intergovernmental Panel on Climate Change report, which estimated that if precautionary measures are not taken to reduce emissions from the burning of fossil fuels and other actions harmful to the environment by 2030, the environment will be in an irreparable state of repair.

“It really started to hit me about how we only have 12 years until it is irreversible. That’s when it really hit me that we really have to do something,” Stein said.

Stein was inspired to take action after seeing posts from Thunberg’s protests in Europe. “I watched a lot of her speeches, and her whole philosophy on why striking school on Friday is a good move,” Stein said.

Stein, Friedland and DeNunzio began to plan the strike two weeks ago. They set it up through an organization called Action Network, which assists people in raising funds, and spreading awareness for protests. Another group of students, from Case Western Reserve University, were also planning a protest, and had secured a space in which to hold it. “[The CWRU students] had been working on getting a space, and making sure everything was legally okay, while me, Marina and Chloe were working on [public relations],” Stein said.

The collaboration with the CWRU students allowed the group to conduct more fundraising for the event. “We’re working with them and we’ve raised money for an actual sound system, with a podium and a microphone. We’re working on getting speakers from different organizations, and student speakers,” DeNunzio said.

Raising awareness for the event was not difficult. “It was pretty easy to spread the word. Cleveland.com was super responsive about it, which was awesome, and we’re still working on more PR stuff,” Stein said.

During the planning process, Stein received the majority of support from adults in the form of positive comments left on the group’s Facebook page.

The group was also able to promote the strike at school. “We printed out fliers, and we did our best to pass them out at lunch for anyone who would listen. We would run around the lunch tables, begging people,” Friedland said.

“It [comments from adults] really surprised me, and it made me happy, because I feel, a lot of times, we talk about how the older generations don’t really pay attention to this kind of stuff, because it’s not going to really affect them that much, because when the effects of climate change really get bad, they’ll be dead,” Stein said.

The support from adults reaffirmed Stein’s belief that this strike is not a hopeless endeavor. “It kinda gave me hope because there were so many people who generally, I would think, wouldn’t care about the issue, that were telling me they were really supportive of it,” Stein said.

Adults, however, have also been the main source of negativity leading up to Friday’s strike. Stein said, “Everyone says not to read the comments on Cleveland.com, but I did because I didn’t feel offended by them. I just thought they were funny.” She added, “they were really mad at us for skipping school, basically, and I just think it’s funny that people who aren’t going to be affected by this are upset that kids are skipping one day of school.”

Friedland highlighted the importance of striking on a school day. “School is important to us, but we’re showing that the environment is a priority, and it’s one of the most important things to us. If we don’t help the environment, there will be no school,” Friedland said.

DeNunzio recognized that the strike could seem like an excuse to miss school, but explained that striking on a school day is more impactful than striking on a weekend. “It makes a statement, it creates a point. We’re willing to sacrifice our education because we believe so strongly in this. When you have 100-plus [students] flooding out of schools, it’s a disruption in the school day that forces people to look at this, and say, ‘They really care about this ‒ maybe we should, too,’” DeNunzio said.

Stein hopes the lasting impact of this upcoming strike will raise awareness here of efforts made in Europe to affect positive change for the environment. “The idea is that, if a parent knows that kids in Shaker are worried about climate change, I think that it might bring more community discussions about it with adults, and with children.”

Stein added, “I hope that the lasting impact will be that the politicians understand that this generation is not going to back down until we feel comfortable that our future’s are safe.”