Bringing a National Presence to Shaker 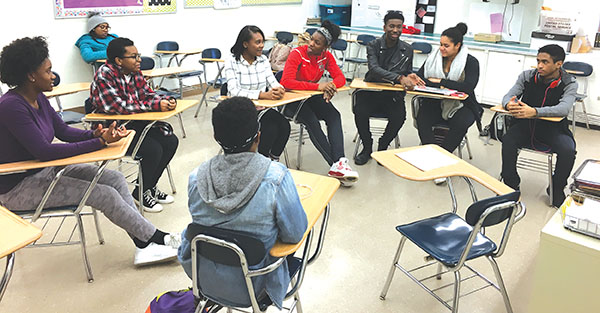 Members of the high school’s chapter of the NAACP engage in discussion in Room 157. “Through the [NAACP’s] Race and Culture Committee, we’ll be doing different discussions and different activities, maybe even field trips, based around bringing racial and cultural awareness,” said Siraj Lee, senior and NAACP leader.

Shaker students have a new way to stay woke.

Twenty-eight students comprise the high school’s new chapter of the National Association for the Advancement of Colored People, which began meeting this year.

According to the NAACP website, the group strives to “ensure the political, educational, social and economic equality of minority group citizens of the United States and eliminate race prejudice. The NAACP seeks to remove all barriers of racial discrimination through the democratic processes.”

Among the 60 founding members, seven were African American and the others white.

“The organization has a rich history, and we’re not remaking the national organization, we’re just bringing a unit of that organization to the high school,” NAACP adviser David Peake said.

“The NAACP, to me, is a group that works on promotion of race and culture, as well as promoting achievement,” said senior, Siraj Lee, the Race and Culture Committee chairperson. “Not only for people of color, but for everyone.”

“It means equality of all of the races and helping our people advance in education, economics, and with jobs and careers.” said NAACP secretary Gabby Holt, a sophomore.

Senior Sophia Ramsay is the only white member in the club. “I feel kind of disappointed,” she said. “In a case of racism, especially in a school like Shaker, we do pride ourselves on diversity, and everyone claims to be woke, but yet you see no one really wants to help. So, being one of the only ones there — it’s disheartening.”

Woke, derived from the word awake, is a mainstream term from the African American Vernacular English dialect meaning a person is socially aware of a topic.
This is the NAACP’s first year as an extracurricular at the high school, “We started discussion for the NAACP this fall,” Peake said. “We still have yet to turn in our official charter. We have gone to the local NAACP meeting to tell them about our group. At the state level, they are extremely excited to have Shaker Heights High School hosting an NAACP Youth Committee.”

Peake explained the structural requirements of bringing a unit of the organization to the high school, “You have to have at least 25 members and you have to have an executive board comprises eight positions to submit a charter,” Peake said. The positions include a president, three vice presidents, a secretary, an assistant secretary, a treasurer and an assistant treasurer. “We’re still establishing the protocols and how we’re going to operate this national organization within the high school.”

Junior Ose Arheghan, who is chapter president, and Lee first presented the idea to create the club and expressed their hopes for inclusivity to Peake. “They came to me with desires to start a group here,” Peake said. “It was designed to serve our minority population, but they wanted it to be an inclusive group. A group that wasn’t just comprises minority students but a group that was comprises students that wanted to help the cause.”

Lee was a part of the Student Group On Race Relations his freshman and sophomore years. “I didn’t feel that was the best for me to make the type of change that I wanted,” he said. “I think here at this school, although it’s very diverse and we see different people of different ethnic backgrounds and cultures all day long, we live in a facade of diversity because of how polarized the cafeterias are … I wanted to start my own club that would work more on giving representation to students of color and promote cultural awareness and something that was also going to be inclusive for everyone.”

NAACP member Morghan Jones, a sophomore, likes the inclusivity of the group. “It’s nice that you don’t have to be chosen to be in it,” she said.
The NAACP comprises four committees, including Arts and Entertainment, Race and Culture, Communications, and Youth Empowerment. “Once a student joins the group, they join one of the four committees,” Peake said. “Each committee does different things to promote an improved climate here at the high school and to hopefully raise achievement.”

“Through the Race and Culture Committee, we’ll be doing different discussions and different activities, maybe even field trips, based around bringing racial and cultural awareness,” Lee said. “It’s about understanding each other and how we can grow in that way.”

Holt heard about the club on the announcements. “It just seemed interesting and like something that I should be a part of because it’s important,” she said.

Ramsay got involved in the club through Principal Jonathan Kuehnle. “I was talking about doing stuff in the high school with the Black Lives Matter movement, and he sent me to Mr. Peake’s office,” she said.

As adviser, Peake oversees student activities in the club. “It’s not my role to plan events,” he said. “It’s my role simply to advise and help students carry out the work of the NAACP.”

NAACP meetings take place after school on the first and third Wednesdays of each month in Room 157. “Those are general body meetings where everyone that is a member comes,” Peake said. “Aside from that, committees will meet as they choose. Each committee has a chairperson who talks with their committee members to decide when they’re going to meet. At our general body meeting, each committee can report what they are working on.”

Currently, Shaker’s NAACP chapter has 28 members. “One of our goals is to increase student membership this year to 40 students,” Peake said. “We’re setting some short-term, manageable goals because right now we’re just trying to establish the group.” In order to become a member, students must pay a $10 fee.

According to Peake, any student can participate in NAACP activities. “It’s not about being a member; it’s about getting things done,” he said. “We’re doing a photo series, and you’ll see students featured that aren’t members. You don’t have to have membership to contribute to the cause.”

Holt’s job as secretary is to take notes during meetings. In addition to that, Holt is also taking photos for the Arts and Entertainment Committee’s historical photo series. The series includes students and teachers recreating famous photos of historic figures. “I’m almost done,” she said. “I took one of Mr. Peake and a Malcolm X one.”

In the first months of the chapter’s existence at the high school, the community, including parents in the Parent Teacher Organization, Kuehnle and Superintendent Gregory Hutchings, have shown support. “The PTO has been amazing. Just in talking about the NAACP, several of them gave me money out of their pocket,” Peake said. “I’m one person and I’m a busy person so I can’t do it all. You need help, and people have been really helpful.”d

Prior to this year, Peake had not participated in the NAACP. “This is a historic group. I want to rejuvenate the organization and bring a younger community into the NAACP.”

Lee has enjoyed his experiences in the NAACP thus far. “I love it,” he said. “I’m very thankful that I was able to make this change in my last year here.”

“I really like it,” Ramsay said. “I haven’t been able to get as involved as I want to, especially because it’s a really fresh organization in the high school . . . once we get our grip, I think that we can go really far.”

Holt’s favorite part about Shaker’s NAACP are the field trips. “We went to go see a film,” she said. “It was about Nat Turner and the slave rebellion. It was really good.”

“I like the meetings,” Jones said. “We talk about what we could do to help people of color.”

In the future, Peake hopes, “that the NAACP makes the Shaker Heights community better,” he said.

“I just hope we start conversations,” Ramsay said. “I hope that we inspire people. I hope we hold a lot of events and we start to get a lot of funding, not just for the sake of money but, for the sake of showing that people care.”

“I hope, in years to come, that there might not even be a necessity for SGORR or the NAACP anymore,” Lee said. “I hope that it helps to promote and fix what I believe is broken.”

Peake believes younger generations have the power to bring change. “If we look historically at large movements, it’s typically young people that carry out the movements,” Peake said. “I really think that high school students have a voice.”

Ramsay wants to get more white students involved in the club. “I’m just trying to reach out to everyone else, especially white people, to get people to start helping,” she said. “For me specifically, I’m also involved in the Police Awareness and Student Safety Committee. I want to bring those together because, especially with the Black Lives Matter movement, it’s so important to reduce the tension between people of color and the police.”

“The NAACP, to me, is a way that we can all move forward together,” Ramsay said. “I think it’s about equality but it’s also about realizing how much of a gap there is between people of color and white people and having everyone come together.”

“It was the NAACP that pushed for the diversity we enjoy today,” Peake said. “We want to honor that and continue the work they have done because I think that diversity is something that we love here in Shaker.”