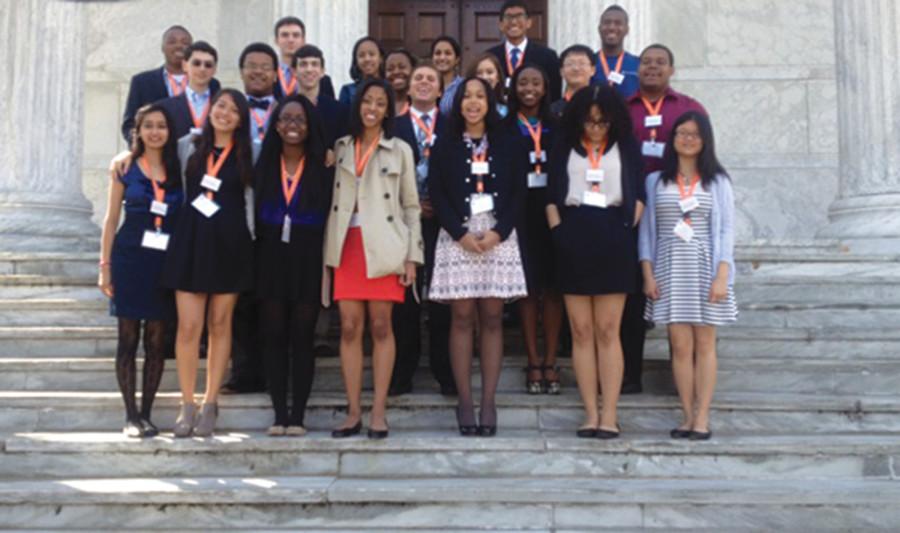 Senior Tiara Sargeant won the Princeton Prize in Race Relations from Princeton University for her program that connects inner-city and suburban youth. As part of her award, she received a free trip to a symposium on race relations at Princeton University. Here she is pictured with this year's 23 other recipients.

In April, the senior SGORR member was one of only 24 students nationwide — and the only Ohioan — to earn the Princeton Prize in Race Relations. Princeton University recognized her for her effort “to increase understanding and mutual respect among all races.”

“When I won, I honestly didn’t believe it,” Sargeant wrote in an email. “I cried and then came back to reality. It was a honor to be awarded for my works. Everything that I do is because I absolutely love to; I don’t expect any recognition. For Princeton University to recognize me for my works in race relations was an honor.”

The prize is awarded annually to high school students from a field of hundreds who have actively participated in a volunteer activity that has had a significant, positive impact on race relations in their community.

“This program focuses on creating connections and passions,” Sargeant said. “This is done through a very intense curriculum which I created. This curriculum starts first semester at an inner-city school. The inner-city students are tutored and mentored in various aspects of their lives.

“During the second semester, they are asked to create a exchange between themselves and a suburban school district. After the exchange, each group is expected to create a service learning project that reflects their passion and their exchange,” she said.

One of the award’s eligibility requirements was a supporting statement from an adult. Student Group on Race Relations adviser Molly Nackley was eager to fill the role.

“Building Bridges is a great program. It brings together diverse backgrounds and expands their views. Diverse friendships that you can form in groups like this are so important,” Nackley said.

Sargeant is a CORE leader in SGORR. She also participates in MAC Sisters, the Superintendent’s Student Advisory Committee and Student Council.

Nackley is a big supporter of Sargeant’s work. “I believe in her, and I believe in what she does. Her passion for social justice is unparalleled.”

Sargeant is not entirely sure what sparked her passion for race relations, but her desire is fueled by everyday occurrences such as the “polarization in the cafeteria.”

Sargent is optimistic about the future of race relations, especially here in Shaker. “We have all the resources around to solve the issues. What I want to achieve is letting students — especially minority students — become connected with these resources,” Sargeant said.

Nackley said Sargeant spearheaded the community SGORR group. “She brought us into the community more,” said Nackley. “She’s grown a lot even this year.”

Sargeant enjoyed her time with Nackley as well. “Molly has seen me try to connect people in various manners, which is the overall goal of Building Bridges,” she said.

Sargeant enjoyed connecting with the other prize winners at Princeton University in New Jersey during a symposium on race relations. She attended the April 25-26 event as part of her award and also earned a cash prize. The symposium attendees included local high school students, Princeton students, alumni and faculty.

“The symposium was amazing,” Sargeant said. “I met a ton of people with similar interest but totally different backgrounds.”

Besides Building Bridges, Sargeant was also responsible for a writing and circulating a petition in March seeking more minority teachers in the district. Another goal of the petition was for Assistant Principal Eric Hutchinson to read names at commencement — the only part of the petition to be fulfilled so far.

Sargeant was pleased with the results of the petition, which caught the attention of Superintendent Gregory C. Hutchings, Jr. and Assistant Superintendent Marla Robinson. “I was honored that Dr. Hutchings and Marla Robinson took the time to sit down with me, Dazmin Laster, Simone Malone and our parents,” she said. “The meeting assured me that Dr. Hutchings has truly taken the time to understand the retention rate of minority teachers and administrators in our school district.”

Sargeant plans continue herwork with race relations after high school, beginning with her senior project. She is working with the Shaker HeightsMiddle School Scholars program.

“Tiara is an amazing young woman,” said Nackley. “I think of her as my colleague, not my student.”