Back To Where It All Started 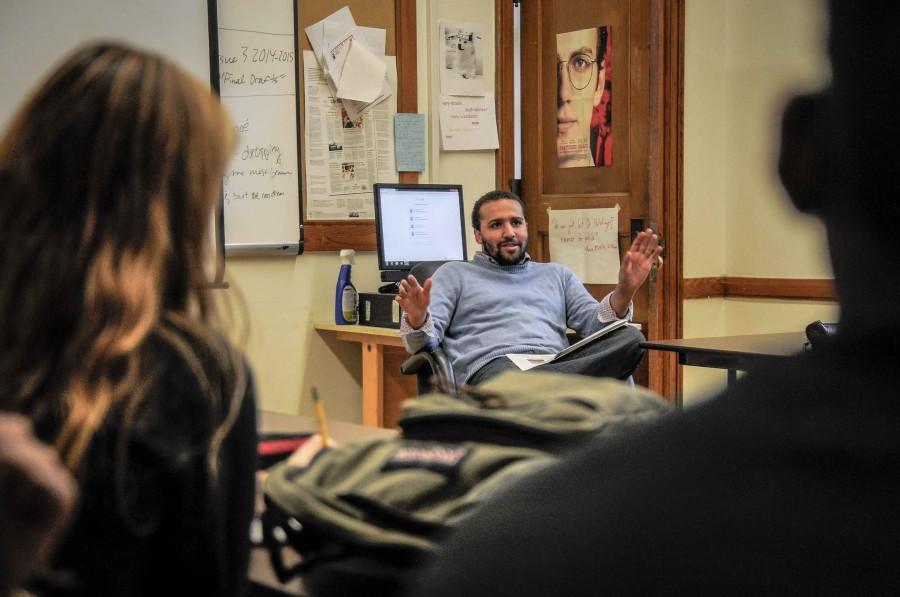 Washington Post reporter and Shakerite alumnus Wesley Lowery answers questions during a Dec. 12 visit to the newsroom. Lowery is in Cleveland to report on police-community relations in the aftermath of the fatal police shooting of 12-year-old Tamir Rice.

From student journalist to political reporter for The Washington Post, Wesley Lowery returned to his roots Friday, Dec. 13.

Right after leaving Ferguson, MO, Lowery was issued a somber homecoming: to report on the Tamir Rice incident. While on assignment in Cleveland, Lowery stopped by to speak to Shaker journalism students about his work. At the age of 24, he is living in the age of technology and has used that as an advantage in his work.

“Journalists want to provide information and tell stories, and to do that we need to meet people where they are,” Lowery said.

Lowery currently has 111,400 followers on Twitter, and has tweeted information about stories such as the Boston Marathon bombing, which he helped cover when he worked at The Boston Globe, and developments in Ferguson. In addition to posting information, he also responds to messages from readers and critics alike.

“I like to be accessible . . . It’s part of being a good reporter,” said Lowery, “It’s my job to inform people and when they misunderstand the information it’s my job to clarify.”

In addition to his social media skills, Lowery spent three months in Ferguson on assignment after the shooting of 18-year-old African-American Michael Brown by Darren Wilson, a white police officer. Two days after the shooting, Lowery flew out to report.

Surrounded by 20-year-old activists in charge of rallies and protests, Lowery’s youth was an asset for him while reporting.

“Most of the people I interviewed would have been my classmates if I had grown up here. It made for a more relaxed conversation and sense of trust,” said Lowery. “My materials are a notebook and a pen, that’s all I need to do my job.”

That constant on-the-job attitude is one that has taken Lowery far. While in Boston after the marathon bombing, Lowery found himself in the middle of a shoot out after chasing police cars in order to get a story.

“At some point you realize you don’t need to keep running towards the gunshots,” Lowery said.

The Boston Globe won a Pulitzer Prize for its coverage of the bombing. Lowery was also named the National Association of Black Journalists’ Emerging Journalist of the Year in 2014.

Lowery said the skills he uses on a daily basis are the very ones he learned sitting in his first period  journalism class freshman year at Shaker.

“Journalism doesn’t change through the levels. The skills I use today are the same that I learned sitting in your seats,” Lowery told the Journalism One class. “Journalism is a lot of fine tuning. My thousandth article will be better than my hundredth.”

Lowery had a lot of time to tune his craft. During his time at Shaker, Lowery wrote for The Shakerite and was editor in chief his senior year (2007-2008). He was also editor in chief of the Ohio University Post.

The opportunity to hear an acclaimed journalist was one that students greatly appreciated.

“As someone who is very interested in journalism, I thought it was an honor to hear someone so successful speak about their career,” freshman journalism student Yasmine Kayali said.