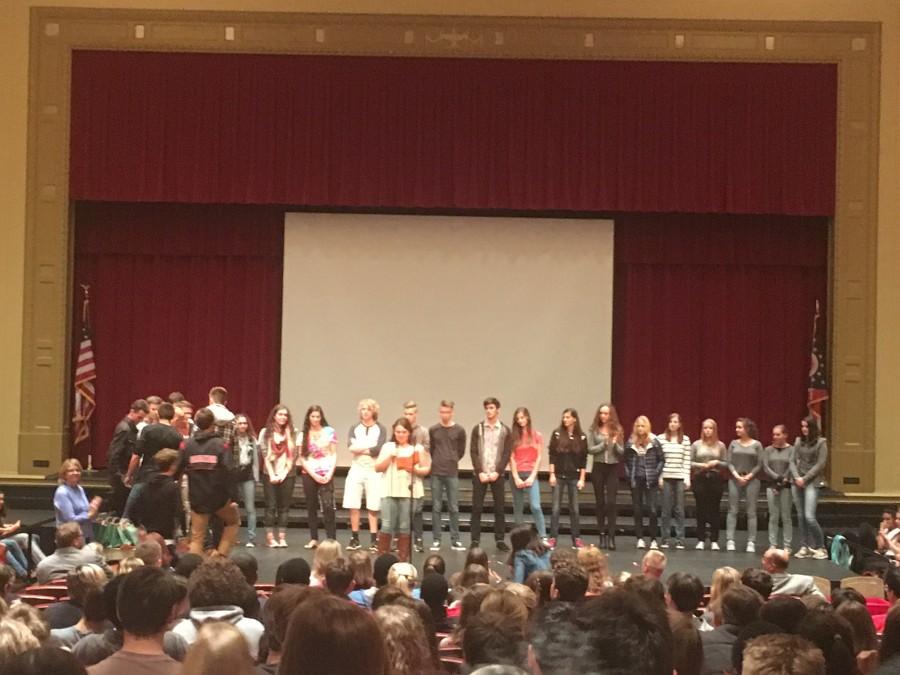 As Interim Principal James Reed stated to Shaker students and students from Goslar, Germany, “This really is a very special place.”

The German Club hosted an assembly Oct. 5 in the Large Auditorium during 9th period to welcome exchange students from Goslar, where they featured presentations from the Modern Dance Club, Chanticleers, Men’s Ensemble and more. The drumline and Raiderettes could be heard from anywhere in the vicinity of the large auditorium.

The assembly opened with two national anthems, one American and one German. Senior Carolyn Sindelar, president of German Club, started the assembly and introduced the cheerleaders.

After the cheerleaders’ performance, Reed addressed the exchange program and its success. “The memories that you have here for the next two weeks will be memories that you will take with you your entire life,” he said. “When we believe that the barriers of gender, religion and nations are broken down by our communications with each other, then we all are enriched by that experience.”

The exchange program started 38 years ago, according to Sindelar. “There was a lot of stress but the German Club all came together and took care of it,” she said in an interview following the assembly.

Selected seniors and juniors went on an exchange program to Goslar over the summer, and current senior JC Evans along with current college freshman Andrew Boyle — a former multimedia editor of the Shakerite — created a video about it.. Senior Santiana Wilson, president of Global Friendship Club, presented two other exchange students from Italy at the assembly.

The Chanticleers, Men’s Ensemble and Modern Dance Club presented songs — either danced or sung — to the students, and the assembly finished.

“It is a good opportunity to be aware of the new people that are coming in,” said Wilson, reflecting on the assembly. “It inspires people to travel more.”

Freshman Brian Ford thinks that it focused on American culture, and forgot that the focus was on the students from Goslar. “I thought we should have talked more about their culture, it was all about how great America is,” he said.
Overall, though, many enjoyed the assembly. “I thought it was a very fun experience for the Germans, and I thought it was very welcoming as well,” said Ford.