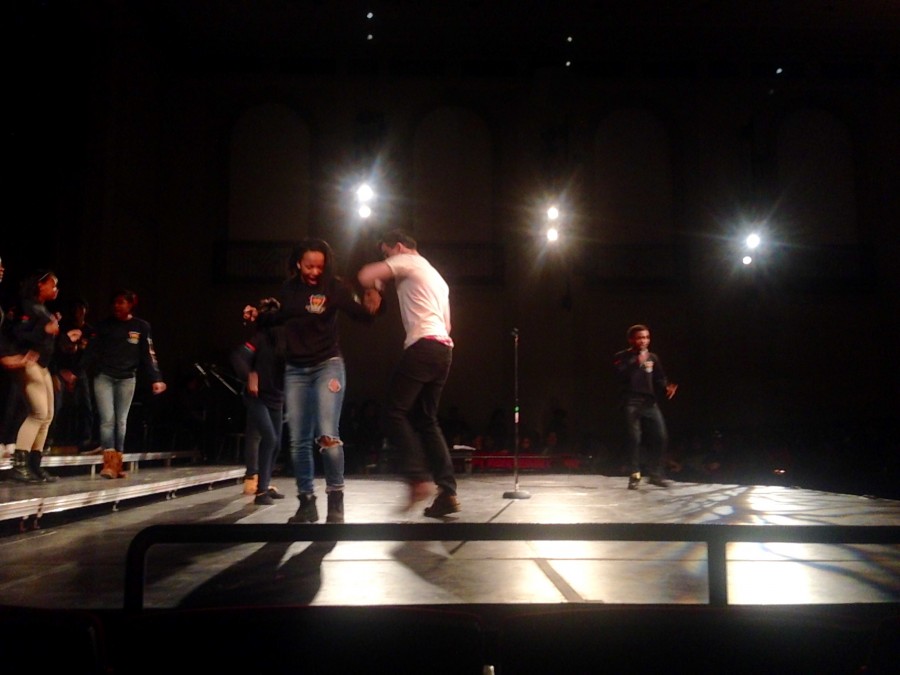 Sankofa members perform at the second half of the preview assembly Feb. 27.

“This is Sankofa 2k15!” said Keaf Holliday, faculty adviser of Sankofa, as he greeted students and teachers during the preview assembly Feb. 27 during second period.

The assembly featured a sampling of the full Sankofa performance, which will be staged tonight and tomorrow at 7 p.m. in the large auditorium. This year’s theme is Our Time, This Generation. To begin the assembly, four girls walked on to the stage and sang “Lift Every Voice,” in a wide range of harmony.

Then, two groups of students, separated by gender, performed monologues inspired by the Million Man March of 1995 and the Million Woman March of 1997. The male group shouted, “We are the million! We are the only thing holding this nation together,” and ended with “We are more than dust to be swept away.”

The female group spoke about how black women, despite suffering,  can change the world.

Following a dance interlude, freshman Samira Colbert then paid tribute to poet and writer Maya Angelou. “Maya Angelou was a woman who spoke as if gold were embedded in her tongue,” she said. Colbert repeated the line “phenomenal woman” alluding to Angelou’s poem of the same name.

Sankofa member Amia Peeler took on ignorance in a spoken word poem entitled “Ignorant Seduction.” Peeler, who wrote and recited the piece said, “Let my ignorance fall over you like a waterfall.” In her poem, she said “I am ignorance, and Instagram and Twitter are my partners in crime.” She began and ended by saying, “I am ignorance.”

After the assembly, Peeler said, “My poem was about how we let ignorance control us and our society today.”

The next performance was set in the Kofa Kafé. With couples slow dancing behind them, two girls sang Mary J. Blige’s “I’m Goin’ Down” accompanied by the band.

Following the ballad, was a spoken word poem by senior Jeron Gaskins. The speech was an open letter to society in which he asked his peers, “You’re rocking the newest shoes and still get free lunch?” He went on to say that he is, “living with a purpose” and that he has to be, “an Oreo if I want to be successful without pushing dope.”

Senior Walker Edwards ended the assembly with a tribute to Trayvon Martin, a 17-year-old African-American boy shot and killed while walking home in 2012 by George Zimmerman, a self-proclaimed neighborhood watchman. Edwards said Martin “walked home regardless though streets all white, not knowing he’d be gunned down by a deluded white knight.” He continued, asserting that Zimmerman “thought cleaning the neighborhood meant killing and fleeing the fight, shooting a black man and staying free as a bird. Now that’s white flight.” He emphasized that, “to change the future we must act in the present, and to act in the present we must view the past,” which aligns which the message of Sankofa.

After the show, students praised their peers’ efforts. “The performance that stood out the most to me was the very end — Walker Edwards’ performance was amazing,” senior Sam Bistritz said.

Sankofa member Arryana Shaw said, “Sankofa means bringing black people together, African Americans, people of other races together, and expressing ourselves through the arts and teaching people.”

Senior Sankofa member Sydni Davenport said, “In today’s society it’s important to get out a message to youths, and it’s hard to gather in one spot besides school, so it’s just important to know our black history. You don’t have to be pro-black, but be open and [be aware of] the violence. For me on a personal level, I’ve had friends who have died, have been murdered because of ignorant violence, and I want people to know that’s not OK.

“It’s not supposed to be a normality.”