Senior artists opt to create murals as their senior project, leaving their legacy on the walls of the high school 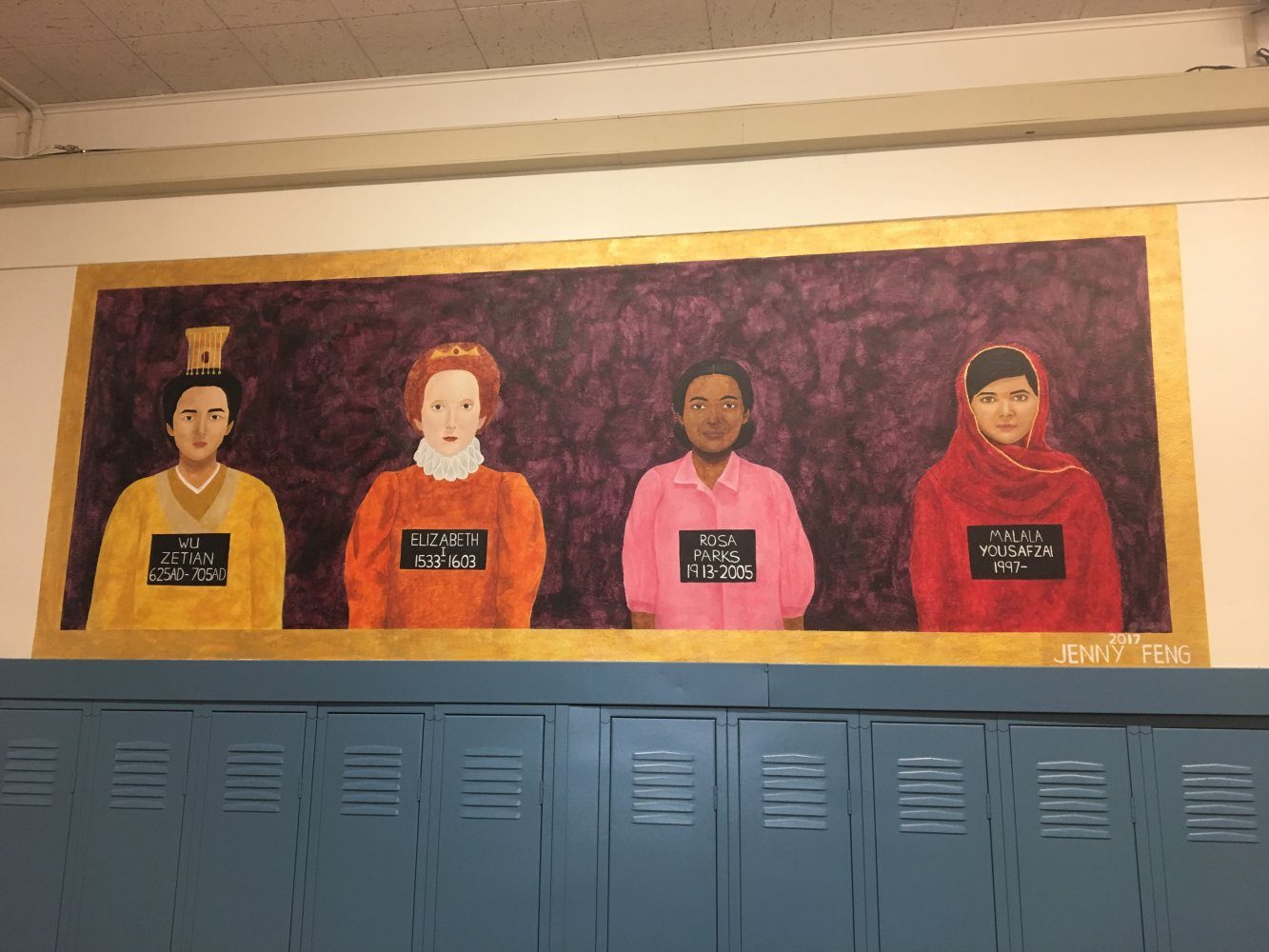 When students returned to school after a long summer break, they found that the familiar blue lockers mural across from the small auditorium had been covered by white paint to match the rest of the hallway.

The high school’s walls are covered in colorful murals painted for senior projects, and each year at least one new one brightens the plain walls above the lockers.

“I think displaying artistic talent is motivation,” said Katelyn Diemand-Yauman, a new Art Exploration teacher at the high school. “Leaving your mark, having pride in something. Also being able to choose to do something with their interests and what inspires them.”

John Homans, a Shaker alumnus who painted the Shaker vs. University School lacrosse mural in 1991, said that he wanted to memorialize the start of the lacrosse team at Shaker because he was a member of the original team.

Students have their favorites. Junior Natalily Kyremes-Parks’ favorite is the mural featuring portraits of notable women through the ages, which was painted in 2017 by Jenny Feng. “It shows powerful women from all different backgrounds who were ‘rebellious’ because they stood up for what was right,” Kryemes-Parks said. The painting depicts Wu Zetian, Elizabeth I, Rosa Parks and Malala Yousafzai. “I think this one really stands out to girls in high school, ’cause when they stood up for what was right, a lot of them were not much older than us.”

The process of creating a mural includes sketching, figuring out a location, going to the senior project approval committee, making sure it’s proportional, tracing and, finally, painting.

So have students ever defaced the murals like they do to the desks, the bathroom stalls, and the walls of classrooms? Or is it an unspoken rule among the students that you don’t vandalize the paintings on the walls?

“At one point someone had vandalized the painting of Jim Morrison, which was on the north side of the high school” above the planetarium on the second floor, Homans said. “Someone had taken a black marker and scribbled out his face, and I remember being mad about that.”

The blue lockers mural was prominent and greeted students, staff and visitors who entered the high school through the Large Auditorium doors.  Even though it blended into the hall, students noticed when it was gone.

“It was a plaster wall that had been painted, but uh given it’s location a couple of things just inadvertently smacked into the wall and ended up punching some holes in it,” said Principal Jonathan Kuehnle. He said that they had re-plastered many times, but it didn’t hold up, and the school decided to take the plaster down and build a stronger wall.

The last hole in the mural was from a student who lost their footing and who’s elbow reopened an existing weak point in the wall.

“It makes me sad. It does have to happen at some point. Although, it is like a historical record,” Diemand-Yauman said.

“I’d be frustrated” if murals were covered up, said Homans, “because that would mean that it could happen to anybody who’s got their art and legacy on the wall. It would be disappointing to learn that someone’s art and legacy that represents the school and the student body would be removed or covered up.”