After the OHSAA left the decision up to individual districts, Shaker has postponed winter sports indefinitely 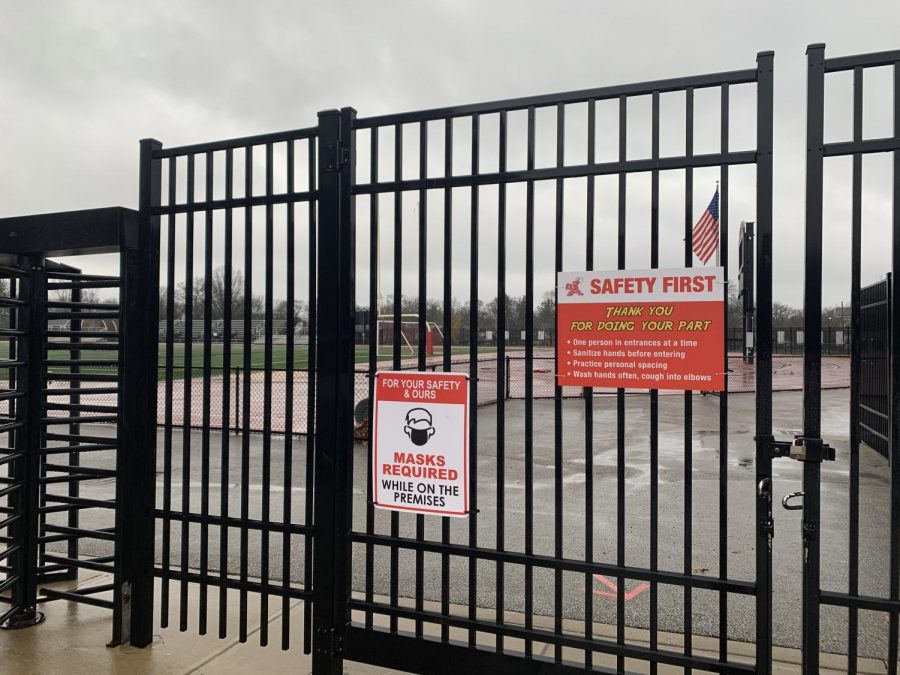 The district has suspended all winter sports in keeping with the Cuyahoga County Board of Health’s release of a 28-day stay-at-home advisory Nov. 18

The advisory asks that all residents leave home only for essential trips, such as purchasing groceries and going to work or school. The resolution also states that schools should return to or continue remote learning after Thanksgiving. Along with Gov. Mike DeWine’s statewide 10 p.m. to 5 a.m. curfew for businesses, the advisory is meant to lessen the impact of the 118 percent increase in reported COVID-19 cases in Ohio.

In Cuyahoga County, the positivity rate of tested individuals has risen to 21.4 percent and is climbing, according to Cuyahoga County Health Commissioner Terry Allen.

In a statement published on shaker.org Nov.18, the district stated that “Shaker Heights High School and Middle School in-person athletic practices and competitions are suspended immediately and until further notice.”

The district sent information to athletes via an email sent through Final Forms, an online registration website used by the district for all students participating in interscholastic athletics, that practices and games would be suspended and that coaches could host virtual practices in the meantime.

“We do of course recognize that sports are a really valuable part of the overall Shaker experience and as we’ve done from the beginning, we will continue to consider ways that we can bring students back when we can return to sports in a safe way. But for the time being, it just ascended in line with the advisory issued today,” said Dr. David Glasner, superintendent.

Glanser said that other schools in the Lake Erie League have suspended winter sports, including Bedford and Cleveland Heights.

On Nov. 20 the Ohio High School Athletic Association reaffirmed its decision to allow individual school districts to choose whether to continue winter sports. According to the OHSAA, 56 percent of schools that responded to a survey voted to move forward with the winter season; 33 percent voted to take a break and establish a statewide restart date in January; and 11 percent voted to suspend sports until further notice.

In a Nov. 22 Raider Roundtable, a newsletter published by the athletic department, Athletic Director Michael Babinec provided a winter sports pause checklist for athletes. Babinec included in the checklist that athletes are to address academic concerns; coaches will be able to see academic records of athletes; athletes should stay in compliance with COVID-19 guidelines; athletes must update Final Forms; and coaches will have access to Google Classroom to communicate with teams.

“Our goal is to return to practices and competitions as soon as possible, and all stakeholders play an important role in making that happen,” Babinec stated.

Although athletes are disappointed, they are not surprised.

“Coming into the hockey season, I wasn’t terribly confident that we were going to go through the full season as a regular season. I mean, I thought it was probably going to be shortened, so I guess this postponed season didn’t come as a surprise to me,” senior hockey player Eric LaMonica said.

Senior swimmer Kayla Roth was also looking forward to her senior season. “They’re some of my best friends, and I know I can really rely on them, and it kind of sucks that the time we have together is cut short. I know it’s not over yet and there’s still a little bit of hope,” she said

“I just feel disconnected from everyone in general, and I’m sure that’s how a lot of other people are feeling, too,” senior diver David Spielman said.

Senior basketball player Zaria Thomas said that there was a better way to approach the season. “I think we could have waited until someone has corona, or something. Other schools, they waited,” she said. “Have smaller groups and have smaller groups come in at different times.”

This winter season was almost disrupted Nov. 17, before the county announcement, after one winter sports team was caught, via social media posts, hosting an indoor gathering without using proper COVID-19 precautions. The district sent an email stating that “any confirmed incidents of individual and/or team violation of district, school, team, or Athletic Department COVID protocols will result in a 2-week quarantine and/or suspension from team activities for any involved participants.”

Senior swimmer Isaiah Nevels said that if the gathering had not occurred, teams could at least continue practicing while meets and games are suspended. “That gathering — t definitely added to it, but I don’t think it affected it because the numbers were already going up,” he said.

Women’s basketball, swimming and diving and hockey are all hosting virtual practices while sports are suspended.

Spielman said, “It does suck that our season’s canceled. But it’s a sacrifice that we have to make for the safety of others, and there’s other things we can do to stay healthy and exercise.”