The Man, The Myth, The Legend: TB

A closer look at the trainer we know and love, Trainer Bob 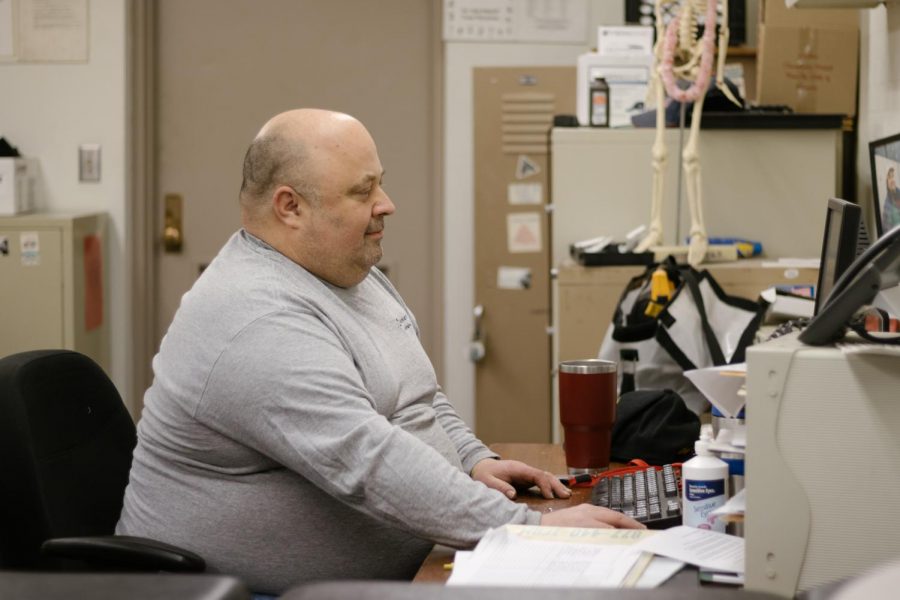 Sophomore Garrett Ritts arrives at the Thornton Park Ice Arena for his hockey game and takes a deep breath of the crisp, cold air. He’s about to enter the locker room when he sees Trainer Bob out of the corner of his eye. The notoriously curt school trainer cracks a smile and hands Ritts a piece of candy before wishing him good luck.

You may have seen Trainer Bob, also known as Bob Collins, drive his cart around the turf field. Most commonly known to athletes as “TB,” Collins has been Shaker Heights High School’s athletic trainer for 28 years and has been in the profession for 32.

Growing up in Elyria, Collins played baseball and football in high school. He became interested in becoming an athletic trainer through his high school guidance counselor and a friend in the profession.

Collins attended Bowling Green State University, where he earned a degree in education and minored in health and athletic training. “The way I look at it, there’s two types of people who become athletic trainers: one who becomes injured, goes through the whole sports medicine process and gets into it, and the other who loves sports, but aren’t very talented.”

“You have to guess which one I am,” Collins said.

Collins’ job is to evaluate, take care of and rehabilitate athletic injuries and work with athletes on performance and conditioning. He has a contract with Shaker schools through the Cleveland Clinic, and he supervises 13 other high school trainers in the area.

Although he’s known to be brief and a tad gruff, athletes don’t object. “He’s just a very straightforward and blunt person, which is nice to have because I don’t really like it when people sugar-coat things,” junior tennis player Natalia Glinzler said.

“He’s a good trainer and he loves his job. He may seem mean at first, but if you talk to him, he’s a kind person,” sophomore football player Tommy Dunn said. Dunn went to see Collins last summer with a back injury, and said that although he wasn’t bubbling with affability, Collins “went into great depth explaining everything” and helped him to recover quickly.

Collins said that the favorite part about his job is “the kids, contrary to what everybody believes.” He said he finds it satisfying to see injured athletes get back onto the field after working with him.

Veteran tennis coach Al Slawson, who has led tennis teams for 35 seasons, has known Trainer Bob through all of the 28 years he has coached at Shaker. Slawson used the word  “curmudgeon” to describe Collins and added that although he is “very good at what he does,” he does it in his own style.

“He won’t be like, ‘Hello! Welcome to the training room. How are you feeling today?’ ” Slawson said. “Instead, it’s ‘AlrightOKwhat’sgoingon.’ ”

Slawson explained that Collins talks to adults differently than he talks to students, and that students may not be used to his straightforward personality. “Once you get to know him, it’s a whole different thing. You just have to know who he is,” Slawson said.

Ritts said he likes Collins’ humor. “It takes a second to adjust to, but he’s a funny guy,” he said.

Collins said he enjoys working with all sports but admits the weather can be annoying. “Who really likes working with track when it’s 28 degrees out, or even lacrosse, when there’s snow flying in your face the first few games of the season? Then it’s 127 degrees out, and we’re watching a field hockey game,” Collins said.

Collins said that he, “knock on wood,” hasn’t had to deal with any horrible injuries. With football having the largest roster, they produce the most injuries, but, “if you break it down percentage wise, they’re all pretty equal,” Collins said.

When he sees athletes he’s worked with make it to the pros, he laughs, because he remembers what they were like in high school. “One of the things I try to instill in some of our upperclassmen is what it’s going to be like when you go to college and the next level, if you’re talented enough to make it that far, because it takes a lot,” Collins said.

In his free time, Collins enjoys taking a walk in the Metroparks, watching a movie and spending time with his friends, his wife and two daughters.

Collins, who said he likes being called “TB” and “Trainer Bob,” explained that his unique title, which students have been using for decades, evolved after he told students to call him“Bob” when he first started. He was told he needed a title — and has been Trainer Bob ever since.

“You can call me whatever you want. Just don’t call me late for dinner,” Collins said.

Slawson said, “He is very good at what he does. You can have an unconfident, very pleasant, friendly trainer, but I’ll take Trainer Bob any day.”