The Last Closet Opens up With Difficulty 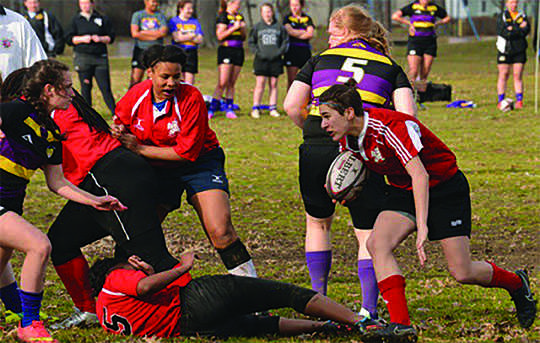 Sophomore Samira Colbert (center) plays against St. Joseph’s Academy during the 2015 season. Colbert is one of few Shaker athletes who have come out. “I think there would be intial awkwardness,” said hockey Captain Peter Shick about players coming out on the team. “However, no teasing.”

They have to choose between coming as a member of lesbian, gay, bisexual and transgender community, or keeping their identities a secret.

Matthew Dils is a senior golfer and cross country runner at Swan Valley High School in Saginaw, Michigan. Dils made the decision to come out in April 2015.

“It is hard coming out while being in sports. I feel as though some are afraid as how they will be treated on the field or get looked at in the locker room,” Dils said in an email interview.

Dils is one of 105 individuals whose decision was made public in 2015 on the website Outsports.com. The site is the world’s leading gay sports publication, where athletes tell their coming out stories. Reading these stories inspired Dils to make his decision.

In the Outsports article in which he came out “In the end, it all ended up working out for them, therefore giving me more and more courage,” said Dils. “These articles gave me a sense of security that things would be OK.”

He also explained while it is already hard to come out, it is even harder for an athlete.“It is already a hard thing to come out, but to add the pressure of every one of your closest peers on a team to know something so personal makes it that much harder,” he said.

Dils’ experience is occurring more frequently at high schools nationwide as more and more professional and collegiate athletes come out and the national culture becomes more accepting of LGBT people. High school athletes and their coaches are learning how to respond.

Dils’ experience is occurring more frequently at high schools nationwide as more and more professional and collegiate athletes come out and the national culture becomes more accepting of LGBT people. High school athletes and their coaches are learning how to respond.Shaker is no exception. Students interviewed for this story said gay male athletes here find it especially difficult to come out. Sophomore Emma Duhamel said it is hard for male athletes to come out because of their “hyper-masculine image.” Fear that people will consider them less masculine discourages male athletes from doing so.

Shaker is no exception. Students interviewed for this story said gay male athletes here find it especially difficult to come out. Sophomore Emma Duhamel said it is hard for male athletes to come out because of their “hyper-masculine image.” Fear that people will consider them less masculine discourages male athletes from doing so.Lesbian athletes are not free of worry, either. Sophomore Samira Colbert, a lesbian rugby player, said there are many kids in sports who are afraid to come out. “Being an athlete is a very physical thing, including being close to other people of the same sex,” said Colbert. ”Some [teammates] might get weirded out.”

Lesbian athletes are not free of worry, either. Sophomore Samira Colbert, a lesbian rugby player, said there are many kids in sports who are afraid to come out. “Being an athlete is a very physical thing, including being close to other people of the same sex,” said Colbert. ”Some [teammates] might get weirded out.”

Senior men’s basketball player Jeramie Burge said that a gay teammate would cause discomfort. “Honestly, the [gay] athlete would not be as welcome,” said Burge. “The teammates would feel uncomfortable changing and showering with a gay teammate in the midst. You would feel like [you’re] getting ‘checked out’ by him, and this would cause issues.”

However, senior hockey Captain Peter Shick thinks the hockey team would eventually be able to handle this scenario.

“I won’t lie. I think there would initially be awkwardness,” said Shick. “However, no teasing; our players are above that. I think over time the situation would become normal, and the awkwardness would subside.”

But Noah Michelson, editorial director of The Huffington Post Voices, doesn’t think the locker rooms close environment should be a problem when straight and gay people are together.“Gay men are now proudly serving in the military, in even closer quarters and under way more pressure than professional athletes, without any problems,” Michelson wrote.

Junior basketball player Maia Harris said her team would not distinguish between LGBT and straight teammates.

“With my team. [Everybody accepts] them for who they are and treats them just like everyone else,” she said.

This more equal treatment of gay athletes in today’s society is allowing more professional athletes and referees come out University of Missouri defensive end Michael Sam came out in 2014 and became the first openly gay player to be drafted in the NFL. Sam’s college teammates and head coach were universally supportive of his decision, which earned significant media coverage.

Because the NFL is one of the most popular professional sport leagues in the country, Sam’s announcement and the St. Louis Rams’ decision to draft him encouraged athletes at all levels to come out. Shaker sophomore Micah Hills said Shaker football players would be more accepting of a gay teammate than other sports.

“At first, people will feel uncomfortable, but football players know how to work things out to reach their ultimate goal,” said Hills. “A prime example is Michael Sam, who was an openly gay football player, and he fit in great with his team even though his career didn’t last that long.”

The Rams cut Sam before the 2014-15 season. He now plays in the Canadian football League.

Hills said the football team cares about winning games above all else, no matter the players’ sexuality.

“It does not matter [whether] the man is gay or straight,” said Hills. “The only thing that matters to the team is winning games. We want to win games, so we accept everyone that can contribute,” he said.

Former NBA player John Amaechi decided to come out after retiring in 2007. He now works as a psychologist, a broadcaster for the BBC (British Broadcasting Corporation) and a key activist in improving sports culture for gay athletes.

Amaechi said that while it is great when an athlete comes out as gay or lesbian, an individual should not be pressured to come out. Amaechi visited the high school in 2014 at the invitation of social studies teacher Amanda Ersek and spoke to her classes.

“You don’t tell all high-schoolers that it’s universally good to come out. There are well-documented cases of young people being hurt or hurting themselves because they lack any kind of support system around them. So even in 2016, you can’t be cavalier about people coming out.” Amaechi said in a phone interview.

“If you’re a talented athlete and you might have an opportunity to go to college and get a scholarship and it [could] be jeopardized if you came out in high school,” he said.“You have to be really careful about just saying in 2016 everything’s fine.”

Tennis star Billie Jean King, who was outed in 1981, said today it is drastically easier for athletes to come out as gay. Long after her professional career ended, she remains a well known LGBT advocate. In 2009, she became the first female athlete awarded the Presidential Medal of Freedom, and she contributed to the struggle for gender equality by defeating former professional tennis player Bobby Riggs in a highly publicized contest dubbed the “Battle of the Sexes.”

In an email interview, King noted the price she paid by coming out long before LGBT people were widely accepted. “Today when a prominent athlete comes out, he or she might get a call from the president and be offered new endorsement opportunities,” said King. “When I was outed, I lost all of my sponsorships within 24 hours.”

“It’s been exponential. And it’s been all over the country,” Woog said in a phone interview. “There are gay-straight alliances, or educational policies, or something that is being positive [for gay students] in, like, over 95 percent of the country.”But, he said, the acceptance of high school gay athletes has grown at a slower rate compared to the general high school population.

“It’s been slower. I think the reasons are cultural,” he said. “In the writing I have done, I have talked about sports as being the ‘last closet.’ ”

Woog believes this “last closet” lingers because of the hierarchical system of sports.“You are sort of trained to follow a coach,” he said.“Coaches sort of coach the way that they’ve been coached. They hand down these attitudes that are either anti-gay or misogynistic,” he said.

Women’s rugby coach Jessica O’Brien believes her role as a coach is to always take care of the players first.

“Personally, I want everyone on the team to feel comfortable and accept each other for who they are,” she said.“So far in my history of coaching I have not had an incident where an athlete was being bothered or harassed because they were gay,” she said.

Ellie Felderman, a Hathaway Brown sophomore rower who came out in front of the whole school earlier this month.

“I talked about Megan Rapinoe and how she has made a lot of progress for not only women but the LGBT community as well. I said that it was really important to me, personally, because ‘I’m gay’,” Felderman said.

Rapinoe and especially her former teammate and superstar Abby Wambach have played key roles in making the accepting of gay athletes better.Wambach has committed to being an ambassador for gay athletes and she, along with Rapinoe, have shown athletes it is okay to come out in sports.

Rapinoe has addressed the issue of not enough athletes being out in sports though. “I feel like sports in general are still homophobic, in the sense that not a lot of people are out,” she said in an Outsports article. “I feel everyone is really craving [for] people to come out. People want — they need — to see that there are people like me playing soccer for the good ol’ U.S. of A.”

Felderman said she was tired, of explaining things like why she didn’t take boys to school dances, or how she faked crushes on male actors to play along with her friends. “I just wanted to live my life, no strings attached,” she said.

While she said people are more understanding and accepting that not everyone is straight in today’s world “I think that [male athletes] face a lot more problems coming out because I think society raises or expects most boys to be homophobic,” Felderman said.