The Bigger, The Better 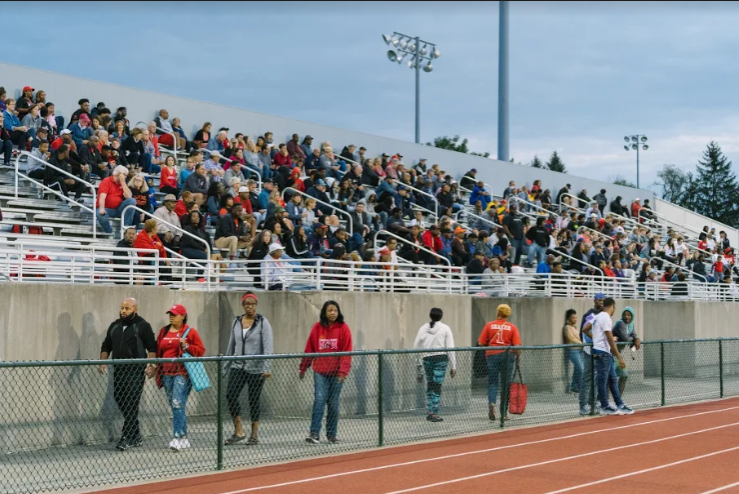 Fans at the football game versus Benedictine on Sept. 8.

The slap of the volleyball being spiked over the net echoes in the stale gym. Shaker wins a set, and a stumbling applause trickles out of the stands. The few parents sitting in the crowd give a hoot and holler, then the energy evaporates.

The next day, the gym booms with squeaking sneakers, buzzers, chatter among the crowd, and roaring cheers after every play. Adrenaline rushes through players as they dash around the court, eager to show their skills.

You definitely heard about that big football game, but what about the winning tennis matches or volleyball game? When sports such as football, basketball, and hockey play, fans fill the stands and scream their support. That energy isn’t the same at a women’s lacrosse game or a swim meet.

When players hear their peers cheering them on, it boosts their spirits and encourages them to play better. “It gives you an inspiration to go out and perform,” sophomore Ari Green said.

“[They] become more motivated to skate harder and are rewarded with applause, cheering, etc.” varsity hockey coach Mathew Bartley wrote in an email.

Sophomore basketball player Danny Young enjoys it when the stands are filled. “I just love the atmosphere, and it gets me hyped up,” Young said. Even though the home crowd lends support, Young prefers away games because he loves it when opposing fans talk trash.

Junior Emma Jevack said she attends football, soccer and hockey games. “No one goes to watch golf or a tennis match,” Jevack said. She said that football and other big games get the most publicity, but she doesn’t hear much about other sports.

People don’t know the rules and culture of games such as field hockey and rugby. “People tend to gravitate towards the sports that make the most money and get the most attention professionally,” Green said. The average student understands the game of basketball, but isn’t used to watching field hockey or swimming.

When few fans attend, athletes may pay an emotional toll. “Playing in an empty gym is kind of depressing. We want to see our fellow students cheering us on because it means a lot,” Green said.

“We are lucky to have some great fans attend our hockey games, so it would be nice to see some of the other sports receive more support,” Bartley said.

Varsity volleyball coach LaToia Gaiter said she would absolutely want more fan support at games. “I think the players should want to play harder at home games where their fans and family and everybody can attend,” Gaiter said.

Last year the volleyball team struggled to attract fans, but this year they developed a new approach. Students could attend games for free if they wore Shaker gear.

Volleyball player India Williams said, “Now we have nearly half the varsity football team coming to our games.”