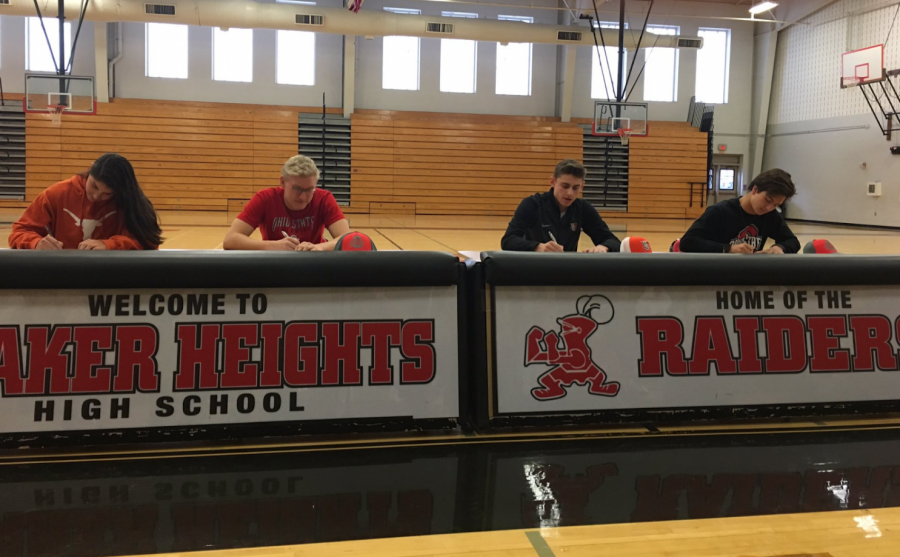 Sophia Calabrese, Chachi Gustafson, Nathan Rose and Lyle Yost all sign their letter of intent to their school of choice.

Calabrese will be a part of the University of Texas crew team, which is ranked third in the country.

“It took a lot of work to seek out opportunities and help instead of giving up when it gets hard,” Calabrese said. “With rowing, especially, the result of your work is delayed, so staying dialed in and focused all the time is key.”

Calabrese will be joining UT’s powerhouse rowing program, which has won four straight conference titles and has sent athletes to the Olympics.

“I knew I definitely wanted to be athletic and to do a sport in college at some level of intensity,” Calabrese said. “As my love for rowing grew after I joined Shaker’s team, my sense of competition also kicked in, and they combined in a desire to race at higher and higher levels.”

She continued, “I chose Texas because it has the perfect combination of music and rowing. I am going to major in music performance. Texas also has a really competitive rowing team that I really liked the look of when I went on my official visit.”

Nathan Rose will play baseball at Bowling Green State University, which has won five Mid-American Conference titles. He will play under head coach Danny Schmitz, who is currently in his 23rd season coaching for BGSU and has led the team to more than 600 wins.

Rose said he chose BGSU because the campus had a good vibe and he felt a strong connection with the coaching staff. “I think it is a great fit for me academically and athletically,” he said.

“I have worked really hard during both the season and the off-season. I have had a ton of help from all of my coaches as well as support from my family. They have been a huge help for me,” he said.

According to the National Collegiate Athletic Association,only 2.1 percent of all high school baseball players move on to play Division 1 baseball.

“It was always my goal to become a Division 1 baseball player,” Rose said. “I knew that I would have to work very hard to get to this point.”

Yost and Gustafson will both attend The Ohio State University to dive and swim.

According to the College Swimming Coaches Association of America, OSU’s swim team has consistently been ranked as a top 25 program.

“It took a lot of time and drive to get to this point,” Gustafson said. “I definitely have always had a strive to be the best, and I am super competitive. These two things have kept me going throughout the long and early hours of swimming.”

Yost is also a two-time diving state champion and a member of Team USA diving.

“I think self motivation was one of the most important things. I dove for a few years before I really had a big goal that I cared about, which was qualifying for the 2015 Junior Pan-American Games,” Yost said.

Both Yost and Gustafson have made state championship appearances. Yost has won two state titles, and Gustafson placed in the top 10 in both the 100 butterfly and 100 backstroke.

“I have learned dedication and passion through swimming. I have eight practices a week, so having to make sacrifices in order to make practice is a regular occurence,” Gustafson said. “It also taught me how to care about something and figure out what is most important to me.”

“I chose Ohio State because it was close to home, and the athletes showed great improvement,” Gustafson said. “The facilities are also incredible, and I loved the size and look of the campus. I thought Ohio State would give me the best chance to grow as a swimmer and student.”

Ohio State swimming and diving, in their history of existence, has won 11 NCAA titles. Their 11 titles rank third in NCAA history behind Michigan, with 12, and Texas, with 14.

No matter where athletes wind up, Becoming a Division I athlete requires a lot of effort.

“Always push yourself and hold yourself to the highest standard you can,” Calabrese said. “Look for help wherever you can, and always remain thankful and humble.”