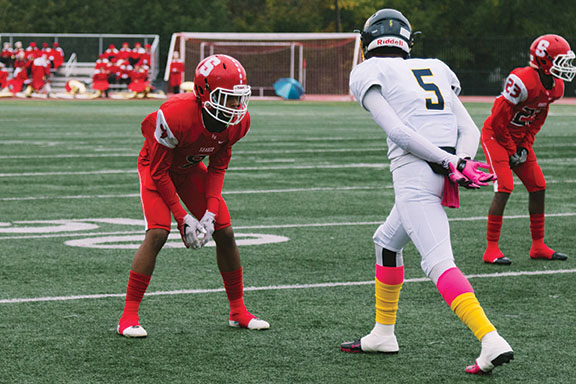 Senior Jeremiah Caver said, “I’ve been called it with a hard ‘r’ and I feel like they are just purposely trying to get under your skin and I hate that that is the way that they try to do it. Like kick me, or punch me in the stomach, do something else.”

Today is the big game.

You and your teammates board the bus, and you get as pumped as you can during the 50-minute drive to your Greater Cleveland Conference opponent’s school.

After the long drive and pregame rituals, the game starts. Shaker scores the first two touchdowns, and you can see that the opposing players, most of whom are white, are starting to feel frustrated.

You make an amazing tackle, and the referee blows his whistle. Out of nowhere, a white player runs past you and calls you, “n—-r,” just loud enough for you to hear. You’re shocked.

You tell the nearest ref, and he tells you, “I’ll listen for it.” For the rest of the game you’re not present. Your coach is screaming at you, telling you to get your head in the game, but all you can think about is what just happened.

“What normally happens is, it’s all cool and fun in the beginning until words are said and you get called the N-word a lot by white players. You can just be blocking a person and then, boom, words are said,” senior Jeremiah Caver, a four-year member of the football team, said.

“I’ve been called it with a hard ‘r,’ and I feel like they are just purposely trying to get under your skin, and I hate that that is the way that they try to do it,” Caver said. “Like, kick me, or punch me in the stomach, do something else. That’s degrading. That’s just not OK.”

In the 2019-20 school year, Shaker will leave the GCC because of experiences like this, among other reasons. The Raiders have switched conferences three times since 2011. With their return to the Lake Erie League next year, they hope the fourth time will be the charm.

But what are athletic conferences, and what’s the point of them?

An athletic conference can generally be described as a group of schools that compete athletically. The purpose of the conference is to organize competition regionally, according to a history of Ohio’s Division I sports conferences available at the Ohio High School Athletic Association website.

The OHSAA source states that conferences exist to simplify scheduling. “Instead of having 346 teams scheduled randomly against each other, you have groups of 10 or 12 competing regionally,” the document states. Conferences also make it easier to rank schools.

The document described what it was like before official sports conferences were established. “The earliest days of interscholastic athletics in Ohio’s high schools, most probably starting in the immediate post-Civil War years, were a bit disorganized, to say the least. Boys from one school would get a team together and challenge the boys from a neighboring school. No coaches, no set schedule, no uniforms and probably no practices, either,” the document states.

According to Cleveland 19 News, Shaker was a part of the Lake Erie League for 90 years, then the Northeast Ohio Conference for three years before switching to the Greater Cleveland Conference. The district endorsed the move from the NOC to the GCC because the NOC was falling apart. In a 2015 article about the switch, Athletic Director Don Readance told The Shakerite that “the move to form the GCC was basically out of necessity. We didn’t really have too many options; the NOC was basically breaking and there were a lot of schools going in different directions.”

Shaker will move from the GCC to the LEL in the 2020 school year. Shaker, Euclid, Mentor, Strongsville, Solon, Brunswick, Medina and Elyria are currently in the GCC, while the LEL comprises Bedford, Cleveland Heights, Lorain, Maple Heights, Shaw, Warrensville Heights and Lutheran East.

“I think it’s a good thing. I mean, we will win more games,” senior volleyball player Simone Harris said. For the 2018 season, the volleyball team’s record was 1-13 inside the GCC and 2-17 overall.
To explain the return to the LEL, the district released a statement declaring “The purpose of this change is to improve overall athletic competitiveness, reduce travel costs, and better support the socio-emotional development of our students. The change allows some sports greater flexibility to schedule out-of-conference games while other sports are not impacted at all.” Sports not affected are ice hockey, field hockey and club sports, all of which compete in Ohio leagues organized for those sports.

Allan Slawson, head women’s and men’s tennis coach and retired math teacher, said that the return to the LEL will help athletes manage time. “If you travel for one hour, play for two hours and then travel for another hour, you just shot your whole evening, so that part of it makes sense,” Slawson said.

Slawson also supports the switch because he believes that African-American athletes shouldn’t have to be subjected to racially hostile opponents. Slawson’s friend has a son who plays for Solon, a school in the GCC. “His son was called a ‘Punk a– n—-r,’ and he told one of the coaches on the other team. There’s been a follow up, and they’ll go through a principal and athletic director and punishment will be assigned, but that doesn’t stop the negative outbursts from competing athletes.”

Caver said he feels terrible when he hears such slurs. “Especially when I know that there are refs that are supposed to be able to control stuff like that, but they don’t,” he said. “I know it’s football and all, but I feel kind of unsafe in the way — not, like, athletically unsafe — but I feel unsafe with my environment.”

Though Slawson, who grew up in Parma, said he knows how similar communities think and feel about race, he believes that it’s not Shaker’s responsibility to try and fix them.

“He probably hasn’t changed his mentality, but maybe he just doesn’t say it so he doesn’t get in trouble again,” he said of the player who insulted his friend’s son. “But that doesn’t mean that the next guy with the same mindset won’t do it again.”

Raider athletes worry about how competition will change.

“I don’t like it because I feel like the soccer teams in the new division aren’t very good, so we won’t have any real competition,” said freshman Maya Miller, a member of the soccer team.

Adrienne Johnson, a freshman member of the swim team, is conflicted about the move. “Most of them don’t have good swim teams. We are a pretty competitive swim team, ranked third in our conference, so there won’t be any competition. But at the same time, my friends have gotten called racial slurs,” Johnson said.

“I think I’m gonna hate track season because I actually like the GCC, especially the big meet at the end of the year,” said Eyan Bryant, a freshman on the indoor track team. He’s also disappointed that he won’t be able to hang out with his friends from other GCC schools during meets.

However, he changed his view after learning why the district chose to return to the LEL. “Now, I do support the switch because I don’t feel like being discriminated against when I go to other schools like Brunswick,” Bryant said.

Freshman Autumn Roberts, a member of the volleyball team said, “I don’t really care, I don’t think it matters. You get into a sport to play; it doesn’t really matter who you’re playing.”