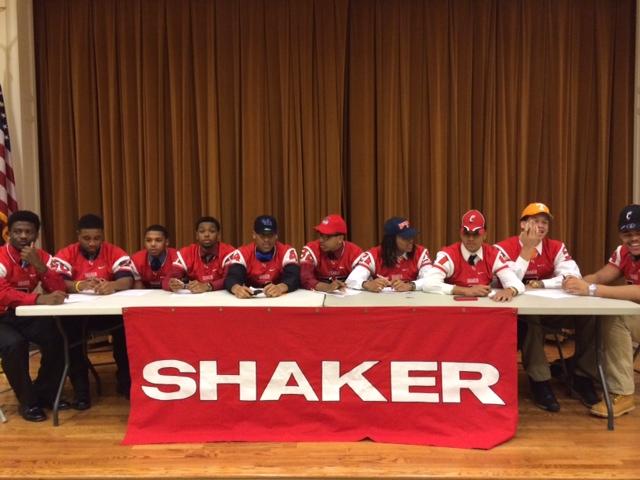 Ten recruits wait for commemoration as the small auditorium fills up in support.

National Signing Day is a special opportunity that most athletes aspire to reach when they begin their high school careers.

On February 5, ten Shaker football players were honored by the Shaker football staff as well as students, faculty, and families for their achievement in moving on to play college football.

Ja’Merez Bowen, Rameses Owens, Joe Henderson, Trey Johnson, Darien Ferguson, Brian Jones, Nolan Jackson-Daniels, Gyasi Calhoun, Greg Claytor and Odell Spencer sat on stage for the commemoration of their hard work and effort. Rayshaun Searles was also honored, but had to miss the ceremony to practice for another sport.

All of the athletes received full-ride athletic scholarships, which Coach Jarvis Gibson said amounted to a total of 1.5 million dollars in tuition.

Bowen is a big lineman who played on both sides of the ball at the tackle and defensive end positions for Shaker. He signed his letter of intent to play at Cincinnati as a defensive end. Bowen was one of the most highly touted Raider athletes this year.

“I want to thank the staff for helping me be successful and giving me the opportunity to play for them,” Bowen told supporters as he wrapped up his humorous two minute statement.

Owens is an elusive running back who also played on both sides of the ball for Shaker. He signed with Robert Morris University as a running back.

Henderson is an intimidating, hard hitting defensive end who also played tight end for Gibson’s Raider team. He was an early commit to Tennessee, where he intends to continue his success as a defensive end. He was another highly regarded Raider recruit.

Johnson is a small, quick cornerback and receiver who played a big role for the Raiders this year. He is a MAC scholar and an exceptional student-athlete. He signed to play at Bucknell.

Ferguson was a big, versatile skill player for the Raiders who was a crucial part of Shaker’s offensive and defensive lines this year. He was also an extremely skilled linebacker. He is undecided between Glenville State and St. Francis.

Jones, Shaker’s quarterback this year, was described by Gibson as a tremendous athlete. He hadn’t begun playing quarterback until his third and final season on varsity at Shaker. He is currently undecided between John Carroll University and Mount Union.

Jackson-Daniels is an exceptional receiver who proved himself an extremely valuable piece of Gibson’s offense the past two years. He was highly touted as a junior but an unfortunate knee injury sidelined him at the end of his senior season. He will be attending and playing for Buffalo next year.

Calhoun was another threat on the perimeter for Gibson’s offense. He was a skilled receiver as well as defensive back. He is also a MAC scholar, and an exceptional student-athlete. Calhoun is undecided as to whether he will go to the University of Rochester to play football or attend Purdue for solely academics.

“It meant a lot playing for this staff and with these players because we’ve been through a lot together,” Calhoun said. “Our last season was really remarkable and playing with these guys has really made me better, stronger and wiser as I mature.”

Claytor is a pure athlete, and was an impactful player ever since he played on the eighth grade team as a seventh grader. In high school, Claytor’s bullish running style and strength made him a hard tackle for defenders and a valuable part of both Gibson’s offense and defense. He is signed to play at Duquesne next year.

Spencer is a highly skilled receiver, and was a focal point of Gibson’s Raider offense. While on the field, he proved to be a constant threat on the perimeter and a worthy target for Jones on the deep ball. He committed to Cincinnati where he will play alongside his teammate, Ja’Merez Bowen.

Searles is the big man on the line and his strength provided value on both sides of the ball. Searles is undecided between several offers.

“I’ve gotten to know some of these guys pretty well,” Athletic Director Don Readance said as he spoke of the players. “Each and every one of them is a high character young guy. . . . Going through what they did here at Shaker, taking the opportunities that presented themselves and doing something with them [indicates that] they are going to have opportunities that will open up for their careers in whatever they choose to do.”

These 11 players account for just a portion of NCAA recruits to come out of Shaker this year. The class of 2014 is loaded with talent and the commitments are flowing in left and right in all Shaker varsity sports.

“I just wish more people would embrace our students and what they do. Whether they have a 4.0 or a 2.5 GPA, they’re still working their butts off and they’re still going to amount to something in the future,” Readance said.

Shaker athletics are proving themselves prominent, and National Signing Day is an indicator of that as this special day is cast upon the recruits.

“This district preaches diversity,” Readance said as he stood in front of the audience. “We have kids from all ends of the spectrum.”