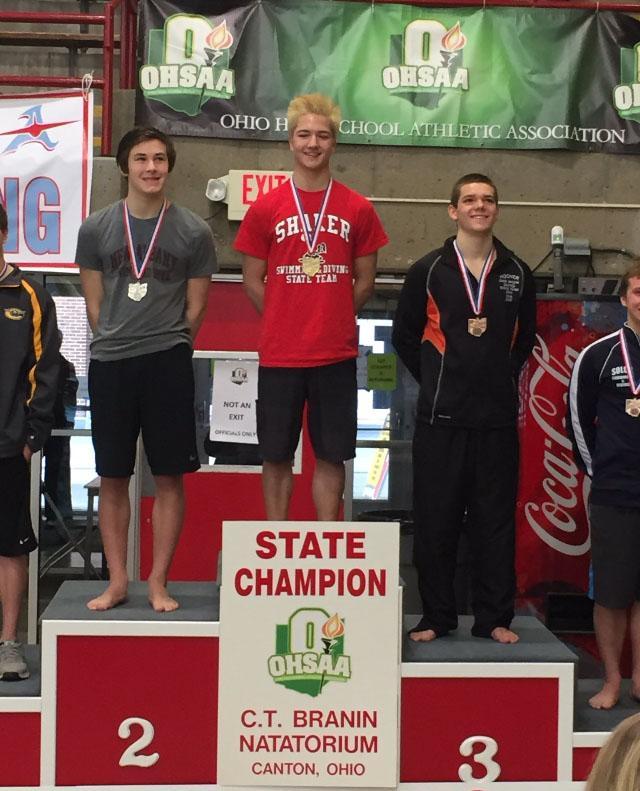 When he stepped onto the one-meter platform Feb. 25, sophomore Lyle Yost needed only 20 points.

He was one dive away from a state diving title.

Last year, Yost finished second in the Boys Division I state championship. This year, he captured the title with a score of 531.10 points.

“I knew that I was the last diver and that all I needed to jump up into first was 20 points on my last dive, an inward 2-1/2 [somersault tuck], which had the highest degree of difficulty in my list,” Yost said.

Yost added that he had consistently executed that dive well in practice and at other competitions. At the state championship, it “wasn’t my best dive, but it didn’t need to be. It was enough points to get the job done.”

Yost said that the competition was more balanced this year. “There was no clear favorite to win it as there was with Cam Thatcher. It was for sure a more competitive atmosphere and it was really anyone’s game.”

Yost’s championship adds to an already successful career. He has competed in junior and senior national meets alongside divers who went on to compete at the college and Olympic levels.

Yost’s coach, Marc Cahalane, said that Yost earned a spot on the USA Junior National Squad as a 15 year old and has remained on it going into the 16-18 age group, “which is a huge feat in its own right.”

Cahalane has coached Yost since he was nine. He said that, for Yost to continue his success, he needs to trust his training. He added that Yost should, “keep focused on the end goal and take one day and practice at a time. If his sights are to earn an Olympic spot on Team USA, then the rest should take care of itself.”

“It honestly feels as if he is one of my biological children sometimes,” said Cahalane. “We are pretty dialed into one another. He knows what I’m thinking most of the time, just like I usually know what he is thinking or feeling.”

Cahalane added that Yost is “an incredible young man not just as a diver but as a person. It has been a challenge at times, but it’s been an absolute pleasure watching him grow and mature. I am amazed at what he has accomplished.”