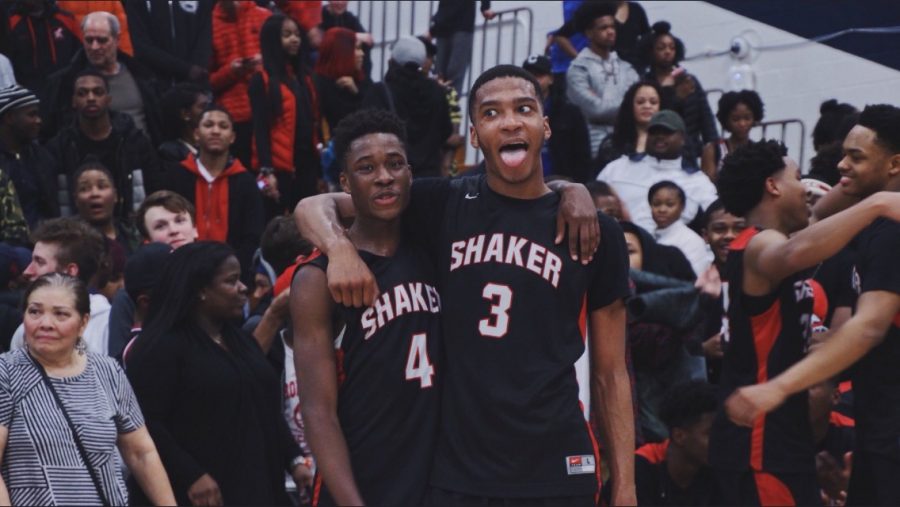 Saturday was a proud night to be a Raider.

The men’s basketball team defeated the Garfield Heights Bulldogs on Saturday night 63-60.  According to cleveland.com, the Bulldogs were the third best team in Northeast Ohio this season, and the Raiders were the fifteenth best. However, the Raiders controlled the game with their energy, defense and timely shooting.

This wasn’t a David and Goliath story, but it was clear who was the favorite. The Bulldogs have Demetrius ‘Meechie’ Johnson, a freshman who scored 50 points in only his third game. They have two 6’9” starters who towered over the Raiders. One of them is Alonzo Gaffney, a star whom 247.com ranked as the 18th best junior basketball player in the country.

Nevertheless, the Raiders stared down the Bulldogs and never backed down. Shaker led the game from start to finish, feeding on the raucous Raider student section that erupted after every basket and defensive stop. The fans exploded after each corner three by our two sharpshooters, senior Justin Phillips and sophomore Dakota Cochran. We applauded senior Najee Hardaway for his tireless effort rebounding and defending players as much as six inches taller than he. Senior Dale Bonner stunned us with his smooth dribbling and quick crossovers. Senior Christian Guess brought the crowd to their feet with explosive dunks in transition.

We rushed the court when we won. We high-fived the players who’d given us this night. Coach Danny Young raised the roof with the crowd in celebration as the final seconds ticked away.

I went to Game 7 of the Indian’s World Series run in 2016. I’ve been to Cavs playoff games. I’ve been to March Madness thrillers. None of those games’ equaled the immeasurable wave of energy I felt in that crowded Solon gymnasium.

The excitement from that victory has created a powerful wave of school spirit and anticipation for Shaker’s regional semifinal matchup against the Solon Comets today. The athletic department stated that Shaker sold all of its 800 tickets on Tuesday. They even bought 300 more, and every one was sold today.

This team is for real. They’re coming up against Solon, who’ve only lost one game all year. The Comets are ranked number one in the state by the Associated Press state poll, and their shooting ability and senior star Sincere Carry will be a tough challenge for us.

But after that unforgettable win Saturday night, it’s impossible to not have faith in our confident Raiders.