This spring, Shaker track and field athletes are clearing new heights after coaches add three-person pole vaulting crew to the line up 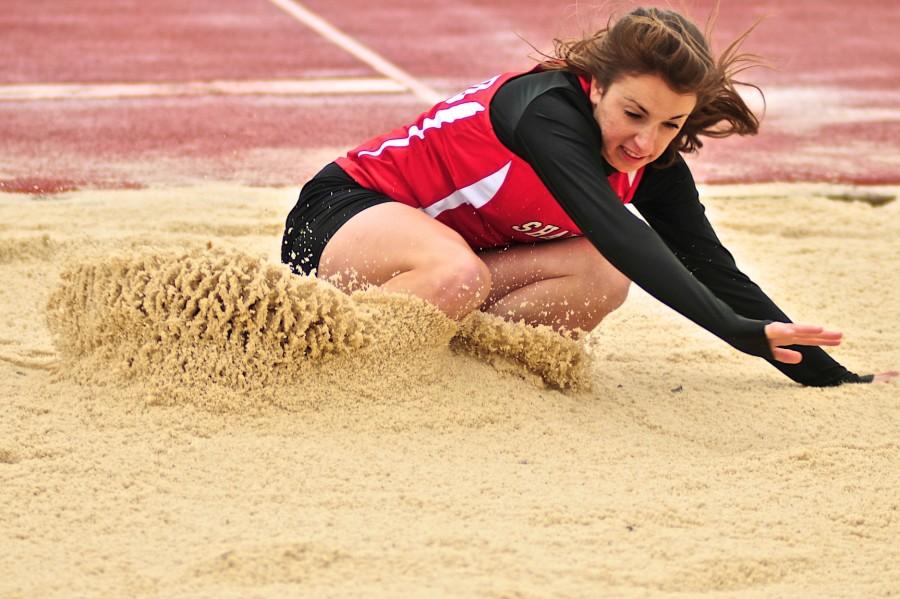 Junior Hannah Heverling lands into the sand after a long jump attempt April 30, 2014.

A few Raider athletes are flying without a net this spring.

Willis and Lowery are still learning the sport’s finer points and have not yet competed in a meet. Heverling, on the other hand, has picked up the sport quickly and has competed and scored points in the event at a few meets.

Lowery loves the idea of blazing the trail for future Shaker pole vaulters.

“It is exciting to be one of the first pole vaulters to represent the Shaker Raiders in such a tremendous event,” Lowery said.

Though it isn’t easy, Heverling likes the challenges that pole vaultingbrings.

“It’s a new adventure at pole vaulting practice everyday,” Heverling said. “You never know what new achievement you might make in just one day’s worth of practice.”

Pole vaulting is a track and field sport in which athletes use a long, flexible pole, usually made of flexible fiberglass or carbon fiber, to launch themselves upward in hopes of clearing a bar, usually about three meters tall at the high school level. When planted, the pole flexes, sort of like a spring, and then rebounds, releasing energy and propelling the vaulter upward. The faster the run, the higher the jump. Successful vaulters land on a thick mat below the bar.

The sport originated in countries such asBritain, Scotland and the Netherlands around 2500 B.C. as a way to jump over marshes and swamps that blocked travel routes. According to the Olympics Organization, it has been an official Olympic sport since 1896 for men and since 2000 for women.

“Coach Watkins knew of my experience vaulting and asked me if I would be interested teaching any interested track athletes,” Lief said. “I enjoy watching my son Brian and the rest of the team run, so I when Coach Watkins asked, I was happy to do it.”

Heverling, who has family ties to the sport, wanted to see what the sport could offer.

“My dad vaulted in decathlons in high school, but wasn’t ever advanced at the sport,” Heverling said. “So I guess you could say I wanted to try the sport for myself and see what I could make of it.”

Though the sport has a limited history at Shaker, Lief thinks the sport could thrive here given time.

“I believe the event could be quite successful. Hannah has already cleared heights in meets and scored points even though she just learned to jump,” Lief said.

“Once the vaulter has completed their run down the runway, it is a very technical event,” said Lief. “The vaulter must have strength and agility as well as the confidence that they can swing over the the cross bar and land in the pit.”

Lief believes a successful pole vaulter must not only be an outstanding athlete, but must also have a sharp mind.

“I think the toughest part of the vault is just after planting the pole and having to think about several maneuvers with the pole, which determine if it will be a successful jump or not,” Lief said. “It’s just a lot to process in a short amount of time.”

Though the sport does have its challenges, as Lief said, Heverling believes her future in the sport is very bright.

“If I stick with it, I could see myself clearing major heights my senior year at some larger invitational meets,” Heverling said. “This is only the beginning.”